I’ve had it with all the cute and cartoonish games on the 3DS. It’s about time we saw some real brutality on the handheld. Well, if you agree with me then I’ve got some good news for you. The all time famous brawler, Rage of the Gladiator, is now live on Nintendo eShop for 3DS. The game has made its appearance on almost all platforms from Android to iOS. Now, you can get the game for your Nintendo 3DS.

Rage of the Gladiator is an action packed fighting game. It’s a first-person fighting game where you’re pitted against the toughest mythical creatures. You have to beat each opponent in order to progress onto the next one. The gameplay is simple yet highly challenging. You may find easy to beat the first couple of opponents but when the tougher crowd comes in you’ll have a hard time unless you master your skills. It’s a strategy based game as you can unlock skills in different classes, offense, defense or magic. Each class has its own advantages and drawbacks. You will have to study your opponents to find their weaknesses. 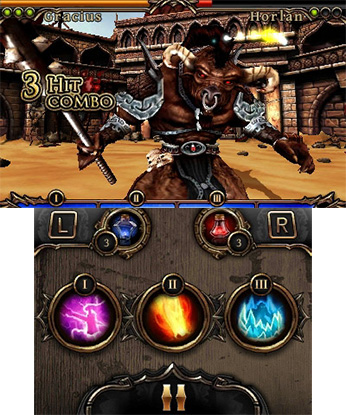 Controls aren’t any difficult to understand at all. Much easier than smartphone touch controls. The learning curve should be somewhere from 10-15 mins and after that you’ll get the hang of it. Dodge, block incoming attacks and slash your opponent when the opportunity comes. The game also utilizes the touchscreen pretty well.

Rage of the Gladiator was first available for the Wii and then made it’s way onto mobile devices, however, the 3DS version of the game is completely revamped in terms of visuals. The graphics are HD, the 3D is amazing and everything is polished. You will definitely love the stunning visuals this game has to offer.

You won’t be disappointed with the sounds either because the background tunes are simple amazing and each enemy has a different voice over for it which gives them all a different and unique personality adding to the overall gameplay experience.

Honestly, Rage of the Gladiator is all aces in my book. It’s a great action packed game with nearly 80 tough enemies to beat so it provides a decent gameplay time. For a price tag of $6.99 on the eShop, it’s definitely worth a shot. A must-have for Gladiator fans who like to duke it out in the Colosseum.