Have you ever played a game of Werewolf, also known as Mafia? For those of you who don’t know, Werewolf is a popular party game in which, two groups try to become victorious by taking out the other side. Each person is given a role and if they have ‘power’ they can use that power during the night phase of the game. During the day phase, everyone must vote for who they think the werewolves are. Lots of secrets and lies are given out in this phase. Once one side has a majority the game is over.

Raging Loop takes this concept and combines it with a looping aspect (like you see in the movie Groundhog’s Day or the recent Netflix series, Russian Doll). However, in Raging Loop’s case, it’s not a simple party game, but a matter of life or death. Do these two concepts make for a great game or is it just a mishap foundation?

Warning: Raging Loop is rated M for murder,  violence, sexual themes, and strong language. Since this game is a visual novel, there will be no deep dive into the story to avoid spoilers.

Haruaki Fusaishi is not having the best time as he just broke up with his girlfriend. Uncertain of what to do, Haruaki hops on his motorcycle and takes an unexpected road trip. Of course, our main character gets lost and somehow finds himself in an isolated village named Yasumizu. Yasumizu is a village that looks and acts like it’s from a different time period. 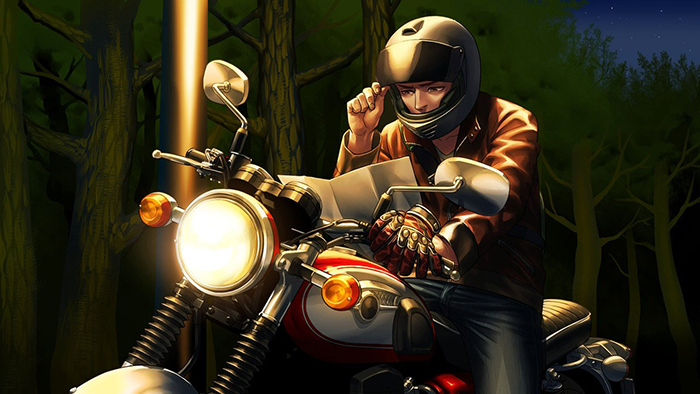 Most of the villagers flat out tell Haruaki to leave as they are untrusting to strangers. While Haruaki is repairing his damaged motorcycle, a large white mist engulfs the village. Everyone is in a panic as they rush to their homes to perform a certain routine. Haruaki gets instructions in what he should do, but he does not follow them and gets attacked by a huge creature. This leads to his death, but unlike most games, this is not the end. Instead, Haruaki is looped back to just before he enters the village. 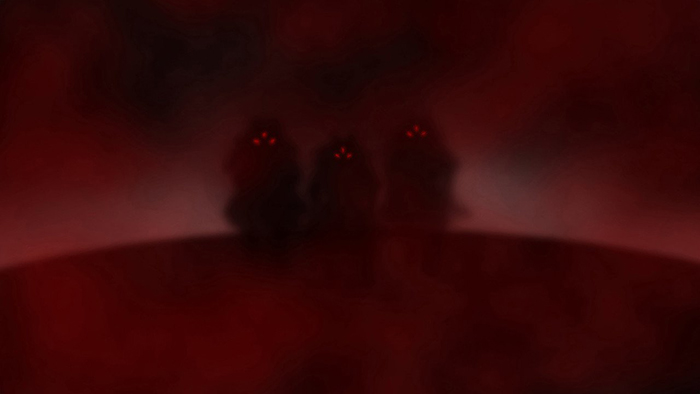 This takes Haruaki off guard, and he’s left in a state of confusion. His curiosity gets the best of him and he travels back to Yasumizu to uncover what is going on. Haruaki is met with a lot of repeating moments, but not everything is exactly the same. This time around Haruaki survives long enough to follow the villagers’ warnings and learn about the ancient gods that encased the mist and feast tradition. This sends Haruaki on the mission of stopping the loop but is unsure how to do so. Haruaki makes new choices with each loop, but sometimes certain people or memories can cloud his judgment. However, information is learned with each loop as he edges closer to solving all the mysteries surrounding Yasumizu.

The feast is held whenever Yasumizu is covered in uncontrol dangerous mist. The mist will not go away until the feast is completed, either by villagers killing all the werewolves or the werewolves outnumbering the villagers. People who try to escape or break the rules of the feast will be killed by corruption. It’s in everyone’s best interest to follow the rules of the feast. Once the feast starts everyone is given a role, but not every role will be of importance. 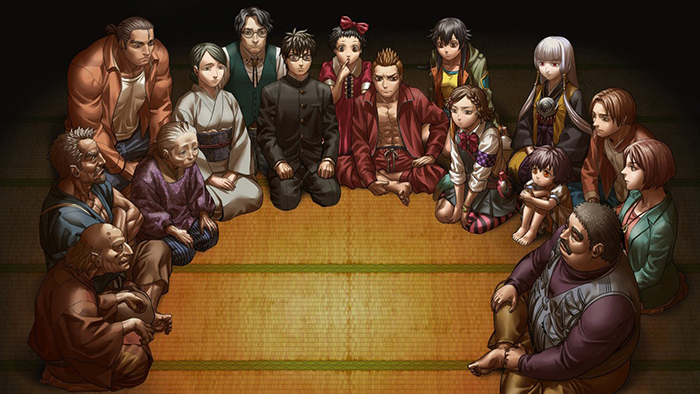 Two to three werewolves are chosen during each feast. The werewolves are aware of their teammates unlike most of the villagers. Werewolves are in the minority, but they have the power to kill a person every night. The villagers, if they are given a guardian role, can be one of four things. A monkey is a guardian role given to two villagers letting them know the other monkey. The crow who can perform autopsies on dead bodies to reveal their role. The spider can protect one person of their choosing every night and lastly the snake which has the important power of telling which living person is a wolf or not. 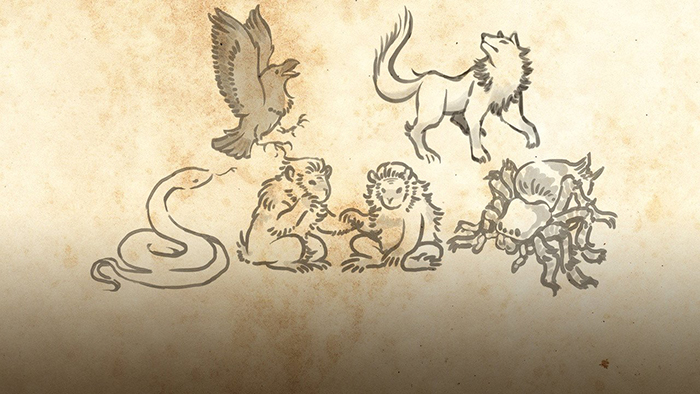 People with roles input their actions at night and wake up the next morning to see the aftermath. After it is discovered who died (or not), everyone gathers around to vote out the most suspicious person. Whoever has the most votes gets publically lynched, so the stakes are high at the voting meetings. This part of the game is easily one of the most thrilling and suspenseful parts of the story. Arguments range from emotional, grudges, morality, fear, and at times even logical. The game holds back no punches. You will see friendships being questioned, social classes clashing, and pureblood thirst against the young and old.

Raging Loop’s gameplay is the story, meaning you are spending large amounts of time reading. There are points where you must make choices and those choices dictate which route you will take. However, some routes can be very long and there can be long periods of time where you don’t make a choice at all. This is very noticeable during the game’s early hours. The game starts off extremely slow, but this is needed to set down the foundation of the lore. Raging Loop’s main story is at least 30 hours long, so players who like more gameplay in their visual novels should keep this in mind. 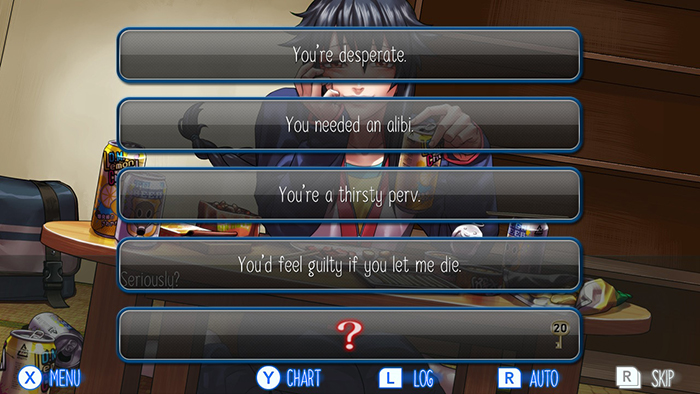 When the option for a choice comes up, some choices may be locked due to not having the right keys. Keys are obtained after Haruaki gains enough new information. This process usually involves him dying as well, but don’t expect a key with every death. Keys are extremely easy to use due to the flowchart system. The flowchart allows you to jump into any story section you encountered before. This saves a large amount of time and doesn’t require the player to memorize where the choices were located. Since keys unlock new routes, collecting them becomes thrilling and will make the player actively seek them out.

Presentation isn’t Raging Loop’s strongest suit, but it still captures the emotion of each scene. The character designs are highly expressive and their voice acting is top-notch. The voice acting may only be in Japanese, but it’s easy for anyone to understand due to their tone changes. The music and sound effects are masterly well done and create the perfect tension for the suspenseful moments. 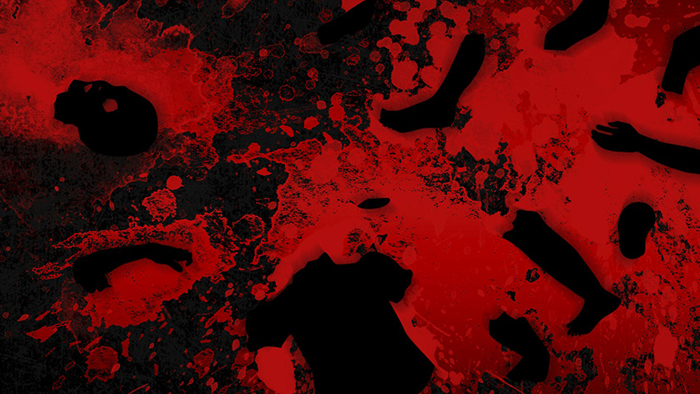 There will be a lot of locations you will revisit, but certain scenes are brought down by the overuse of the same background. For example, anytime Haruaki is inside the dorms you will be greeted with a white wall. Seeing it the first few times is no big deal, but after that, it feels more like a budget-cutting filler rather than a location. The game’s showcasing of murder is also a strange choice. Instead of showing the gruesome murders, the game shows an outline image of the murder. For the more squeamish player, this is a godsend, but for others, this may be a disappointment. Even though the images are not highly detailed, the amplified descriptions capture the horrifying moment and will leave players feeling uneasy.

Usually, interfaces do not get mentioned in a review, but there is so much personality in Raging Loop’s interface. Rather than having a regular tutorial, the game uses a miniature chibi version of Rikako (one of the main characters of the game) to guide you through. This is packed full of information that is newcomer-friendly and highly accessible. All of this can be skipped as well, but you might miss out on some adorable moments/advice from Rikako. 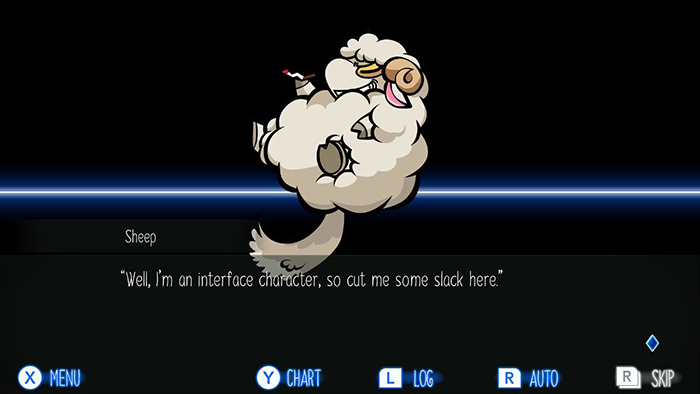 Another interface character is Sheep. Sheep appears whenever Haruaki dies. Often times this snarky character will explain the situation and possible advice on how to avoid death. This is called the hint corner and the option to view it will appear after every death. For players unsure of where to go or want a more detailed explanation of the situation, the hint corner is a useful tool. After viewing a hint from Sheep, Sheep will tell the player exactly where on the flowchart to go.

Visual novels struggle in coming up with ways to add replay value to their game. This is not a problem in Raging Loop, because of Revelation Mode. Revelation Mode lets you see the inner thoughts of characters while you replay the story. These thoughts are marked in red, and you can skip all previously read dialogue and just read the new revelation scenes. Locating which chapters and sections are super easy, as each chapter/section is marked with a star on the flowchart.

It may not seem like a big deal at first, but seeing the inner thoughts of certain characters give scenes new meanings and can often lead to new jokes. There’s a certain character that Haruaki could never get a read on and it was extremely thrilling seeing what that character actually thought of Haruaki. It almost acts like a director’s commentary, so if you are a person who enjoys those you will most likely love this mode.

Raging Loop also contains five different side stories that feature the aftermath of certain characters. You gain access to these side stories after you unlocked the true ending. These side stories are no joke as some can be an hour long. The side stories also contain more detail information about certain parts of the game. It’s a bit of a disappointment that such important information can be overlooked by players. The media player is also unlocked after the true ending in which you can replay songs, movies, and even listen to short readings of the voice actors from the game. The short readings are an excellent touch as you get to see the voice actors’ thoughts on their characters. 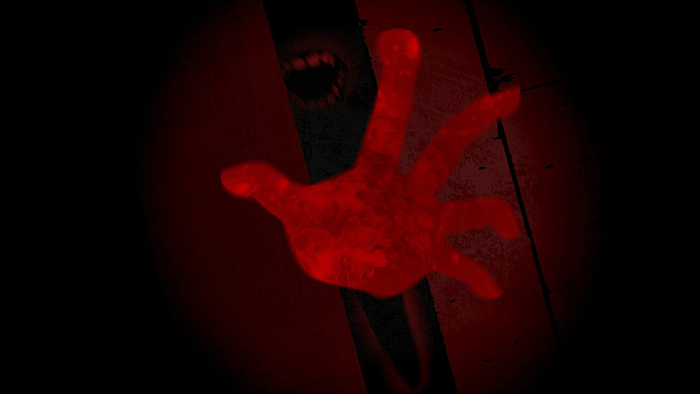 Raging Loop is a thrilling roller coaster of emotions that keeps the player engage with every choice they make. Despite not graphically showing the horror, Raging Loop’s magnificent gruesome descriptions go above and beyond at sending the player terror. Collecting keys becomes addicting, so addicting that most players will have the mindset of “just one more loop”. The combination of time looping and the party game werewolf pays off in a surprising unexpected way. It can take a while for the story to get going and it might not be heavy in gameplay, but the story is entertaining and easily worth the many deaths of Haruaki Fusaishi.