‘Rescue The VIPs’ is one of the main quests in Shin Megami Tensei IV, and it is given to you by Gabby, a nun of Mikado Castle’s Monastery. To complete the quests, you are required to find Shinjuku’s National Park and rescue three allies that are being held prisoner. 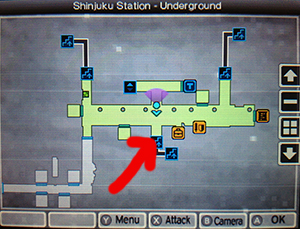 ( Screenshot: The arrow points to the location of the stairs – step 3 from the list above )

Once you find ‘Shinjuku National Park – Pond Garden’, you will notice a fire that blocks your path. Walk up to this fire and press the “A” button (Note: Pressing the “A” button might not be required, however, if nothing happens, press it). The Hexagram Rosary should do its thing and the fire will disappear. Explore the area and search for a path that leads to another area. Once you find the path, someone will block you and there will be a battle.

How to beat Balor?

Balor is a level 31 demon of the Tyrant race that you must battle to proceed. He has no weaknesses, however, there are element attacks that he blocks.

Element skills that Balor blocks (do not use these elements against him) :

You can face him head on with a group of your powerful demons, or you can play it smart and have him knock himself out with a single move. I used the demon known as Long (Level 41 – Dragon race) with the move Tetrakarn. Tetrakarn is a move/skill in the game that repeals physical and gun element attacks for one turn. It costs 50 MP, however, Long had 160 MP during my battle with Balor, therefore, there were no problems.

When the battle begins, hit Balor with your most powerful skills and don’t forget to use the move, Tetrakarn. Once it’s Balor’s turn, if he uses a physical move, you and your demons will not receive damage, however, Balor will. If you successfully hit Balor with three powerful moves at the beginning of the battle, Tetrakarn should be enough to finish him if he uses a physical or gun skill (which he will most likely use against you and your team).

Rescuing The VIPs – How To

After defeating Balor and processing to the next area, there will be demon domains each with a VIP that you must rescue. Defeat these demons and the quest will be completed. Information on how to beat each domain is listed below.

Murmur is a level 33 demon of the Fallen race. He is located in the first demon domain of ‘Kagome Tower – Lower Level’, and you must beat him to rescue one of the VIPs from the quest who is trapped in a birdcage. 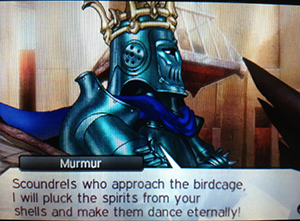 What are Murmur’s weaknesses in Shin Megami Tensei IV :

Gemori is a level 33 demon of the Fallen race similar to Murmur. She rides a camel-looking creature during battle in Shin Megami Tensei IV. To rescue another VIP who is trapped in a birdcage, you must first defeat her. 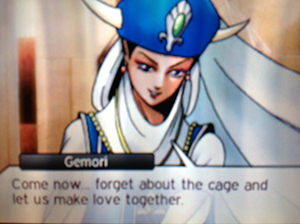 What is Gemori’s weakness in Shin Megami Tensei IV :

She has low HP, so keep using ice element attacks to take her out.

Asmodeus is located in the last demon domain of ‘Kagome Tower – Lower Level’. He is a level 33 demon of the Tyrant race. To rescue the last VIP for the quest, you must defeat him. However, you do have the choice of retreating before the battle begins. 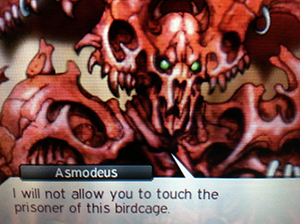 What is Asmodeus’s weakness in Shin Megami Tensei IV :

To defeat him, bring powerful demons with force element skills to fight him.

After defeating Asmodeus in battle, you will obtain the Magic Mirror item. It’s basically an item that repels non-ailment magic attacks for one turn during battle. After defeating all three demons and rescuing the three VIPs, return to Mikado Castle’s Monastery to complete the ‘Rescue The VIPs’ quest and claim your 4000 Macca reward.