The hype around Resident Evil: Revelations was almost unbearable for those of us who counted the days till this formerly 3DS exclusive’s release. The next full entry into the Resident Evil franchise, it claimed to return the series to its survival horror roots. After an agonizingly long wait for fans of the franchise, it finally became available for the 3DS in early 2012. In time, the game was ported to the PS3, Xbox 360, Wii U and PC as well, so is the 3DS version worth buying?

Revelations takes place between the events of Resident Evil 4 and Resident Evil 5. Jill Valentine and Parker Luciani are sent by the BSAA – a counter-bioterrorism organization – to search for missing agents Chris Redfield and Jessica Sherawat aboard the SS Queen Zenobia. But why do Chris and Jessica’s coordinates place them aboard a ship in the middle of the ocean, when they’re not supposed to be there? And what really went down in the ruined city of Terragrigia? The story is definitely the kind that makes you want to keep playing to find out what happens next. Although the story isn’t the outstanding chain of thrills and suspense that Resident Evil 4’s was, it does more than just make the game hang together; the game does well in the story department. 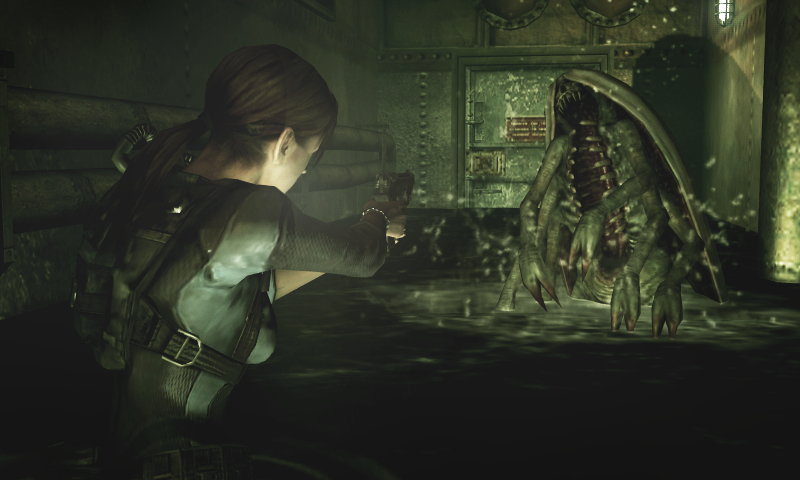 The game uses an improved version of the MT Framework engine. The over-the-shoulder third-person gameplay that was originally introduced in Resident Evil 4 is still here, with some additional elements that make sure you never yawn during the gameplay. While aiming, you can switch between the first-person mode introduced in Resident Evil: The Mercenaries 3D, or the traditional third-person mode that players of Resident Evil 4 and 5 will be familiar with. You can strafe while aiming by holding down the L button. However, you are only able to line up your shot while strafing if you have the Circle Pad Pro or if you’ve enabled gyrosensor controls – yes, you can choose to aim using the 3DS’s gyrosensor in the options.

After the loveable old-school zombies from the early games and the Ganados from Resident Evil 4, Resident Evil: Revelations introduces a new bunch of freaks of nature – the Ooze and the Hunters being the two main kinds. The Ooze are slow, hideous creatures that look like they came from beneath a kitchen sink; the Hunters are fast, reptilian monsters that were introduced as the core of the bioterrorist attack on Terragrigia. One of the few disappointments in Revelations is that headshots aren’t that satisfying – the creatures’ heads don’t explode when you land headshots. It sounds nit-picky, except it would have been so delightful if headshots were rewarded that way, as they were in previous games.

Green herbs are here in Revelations as well, but red and yellow herbs are omitted so there are no combinations – green herbs fully restore your health when you press the A button to use one. You don’t have a health gauge, and your remaining health is judged by how much blood is spattered around the edges of the screen and when your health is dangerously low, the visuals become black-and-white. This is a nice way of judging your health without taking your attention away from the dangers around you – you won’t be glancing at your health gauge because there isn’t any.

Although the game is mostly sound atmospherically, it never quite reaches the point where Capcom’s claim of the series returning to its survival horror roots with this release feels undeniably true. Because you always have an AI partner with you in-game (and the AI in this game is well-done, by the way), walking around an abandoned cruise ship isn’t as frightening as prowling alone in Resident Evil 2’s abandoned police station or venturing forth in Resident Evil: Dead Aim – which, interestingly, also takes place on a ship. However, don’t think it’s Happy Sunshine Land: there’s still a fair share of scares in Revelations.

One of the setbacks of Revelations is that there’s never really an element of surprise, or a jump-scare, when new enemies appear. The game lags for half a second while ‘loading’ these new enemies, and so you’ll always know when the zombified rabid dogs or whatever-it-is are coming. This lag also appears during the elevator rides which replace loading screens in the game, but it doesn’t affect the gameplay there.

One of the most important pieces of equipment in Resident Evil: Revelations is the Genesis bioscanner. You use the Genesis to search for items or hidden objects, and to scan dead enemies – after the Genesis has scanned samples amounting to 100%, you get a green herb.

After beating the first three chapters, you unlock Raid Mode, which replaces the Mercenaries mode of the previous games. Unlike Mercenaries mode, in which you had to kill as many enemies within the time limit as possible, Raid Mode has you go through a complete level taken from the campaign – still taking down hordes of enemies. There’s online multiplayer for Raid Mode, which is one of the best features of the game. You can buy and customize weapons using BP, the in-game currency accumulated by completing levels and fulfilling the conditions of ‘Missions’ (the achievements of the game) in both Raid Mode and the story mode, such as killing a set number of certain types of enemies or finding hidden handprints using the Genesis.

The graphics of Revelations are amazing. There is a high level of detail in all the character models, the environments look great and the visuals don’t look anything short of a seventh-generation home console release. If you come too close to some objects, such as zooming in with the Genesis while on top of a dead enemy, they may appear a little blotchy – but that’s only if you’re determined to find something to complain about; the visuals are excellent. We already saw what the 3DS was capable of when Resident Evil: The Mercenaries 3D came out, and Revelations improves upon those graphics. The in-game movies are well-animated, although the video quality is just decent. The 3D effect really does make things pop out of the screen.

There’s nothing particularly wrong with the music of Resident Evil: Revelations, but it’s still the game’s weakest department. None of the music is frightening, and during the tense parts it does pick up but it never really manages to affect you. It isn’t bad, but it isn’t particularly good either. The voice acting is good, and you can select Japanese, French, Dutch, Spanish and Italian-language voice acting as well. The sound effects are great, and they achieve a good effect, such as having you imagine the Hunters when you hear them running behind you.

There aren’t many genuinely scary games on Nintendo’s mostly family-friendly handheld, but while Resident Evil: Revelations doesn’t give you the same chill down your spine the best games in the franchise did, it is an excellent, mature and enjoyable horror game for a system that doesn’t have a lot of them to begin with. Now that it’s only $20 on the 3DS eShop, it’s a must-have for those looking for a third-person action game.