The 3DS is a bit of an RPG powerhouse. While it has seen its fair share of platformers, racers, puzzlers and even first-person shooters, role-playing games have made up a good chunk of its library. Quite a few simulation games have made it onto the system as well, such as The Sims, Harvest Moon and a few originals like Fantasy Life. Among all these titles, one game seeks to strike the perfect balance between the two. With a dual focus of monster fights and farming, can Return to PopoloCrois: A Story of Season Fairytale make both ends meet?

Let’s get the confusion out of the way: while technically a sequel, Return to PopoloCrois is not a direct sequel to any game on the 3DS. It’s actually a follow-up to a PSP game from 2005, simply titled PopoloCrois. This game itself is based on a manga, meaning some characters are derived from such. Fortunately, you aren’t missing much in the story department. The game catches you up on its characters pretty quickly, and you’ll get to know them pretty well before long. In some ways, the title has a dual-meaning: while a return to a setting from a previous game, this is also a tale of the main character’s very literal journey to return home. 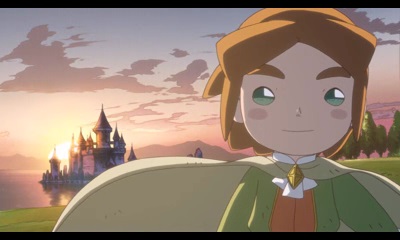 Our hero of the story is Prince Pietro, who’s celebrating his 13th birthday in the kingdom of PopoloCrois. Not all is well though, as a strange darkness is causing crops all around the kingdom to wither and die, which understandably has local citizens in unrest. Pietro’s father requests the presence of Lady Marmela, a representative of Galariland, as their kingdom is suffering the same fate. Marmela claims that Pietro is the key to stopping the black beasts, and offers to help send him to Galariland to confront the source. Unfortunately, Prince Pietro is transported to Galariland with no way to return. With no special abilities, directions, or friends to support him, Pietro finds himself in a foreign land with a difficult mission.

As Prince Pietro travels throughout the unfamiliar Galariland, he’ll meet a whole cast of charming characters who need his help. Among these is a fairy named Connie, who shrinks Pietro down to fight one of the black beasts in a crop at a nearby farm. Learning that the farm is abandoned, our hero decides to set up camp here during his stay in the strange new world. He also learns that the way to defeat the black beasts is by fighting them at a miniature size in the crops they’ve overtaken.

Thus, Pietro’s mission is to make as many allies in Galariland as possible, and travel throughout the land to awaken the Four Farms of Light. In doing so, he’ll be able to rid the world of the black beasts that plague both PopoloCrois and Galariland, then hopefully find a way to return home. 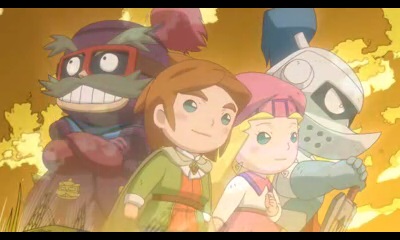 While the stakes are high in this story, the presentation helps keep things light. Prince Pietro’s innocent personality makes him a delightful main protagonist, and his ability to strike up conversations and make friends with just about anyone is uncanny. Joining him is a wonderful batch of partners that will help Pietro on and off the battlefield. While some friends will join him in battle, others can be befriended for support through a bonding system. By completing quests for the people of Galariland, Pietro can improve his relationships with them and earn rewards in return. Even Pietro’s main quest feels in-line with his personality. He’s a helper at heart, and the game willingly displays the fruits of his labor. Despite his predicament, Pietro always faces each new challenge with a positive attitude, and manages to keep that demeanor even in his home away from home.

Here’s where things get interesting. Return to PopoloCrois is a technical crossover between a standard RPG and a farming simulator. Not only will you be fighting enemies in the fields and forests of Galariland, you’ll be tending to those fields and harvesting their crops as well. Despite this, the game actually manages to strike a quite nice balance between these two very different playstyles. The main gameplay loop takes a bit to get going, but once it does, everything falls into place quite nicely.

Battles in PopoloCrois are pretty similar to your standard RPG fare, but manage to go a few steps beyond what you might expect. Each character has standard attacks, more powerful attacks that use MP, Pair Skills that require characters working together, and plenty of items to use. The big difference is that you can move your characters around the battlefield XCOM-style, using the terrain and partners nearby to your advantage. This battle system is just interesting enough to keep things engaging, and the enemies you’ll fight have some creative designs and attacks. 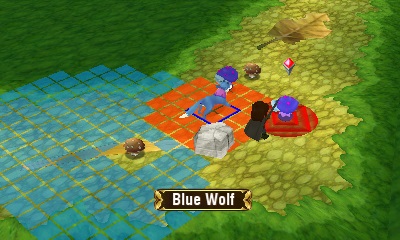 The battles themselves aren’t especially difficult, even on the toughest settings, as long as you stay on your toes. Enemies you can’t see annoyingly interrupt you on your journey, but these battles are generally short enough to not overstay their welcome. In fact, if you’re feeling confident enough, you can simply press Start during any battle to switch to Auto battle mode. You can toggle it off at any time if you feel the need to step in, but generally this option is best suited for the quicker overworld battles of the game. 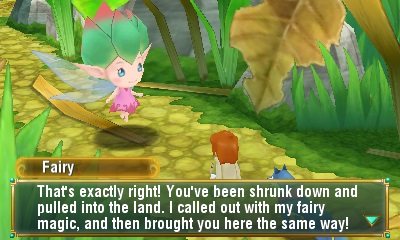 You’ll randomly encounter enemies during your overworld travels, but those craving a more structured set of fights will likely find solace in the corrupted fields scattered about the land. Friendly fairies guard them, and just like Connie, they shrink you down to tackle the tiny enemies waiting within. These cropless corrals act as dungeons, each with their own enemies to fight and treasures to find. Once you clear the dungeons, their corruption disappears. This is how you’ll progress throughout the game, earning experience from battle and using whatever spoils you find to grow crops on your little farm. Farming is the other half of the experience after all, so let’s talk about that next. 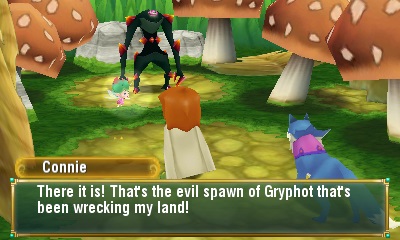 While Return to PopoloCrois is not the first game to attempt to mix two genres of RPG together, it still feels like a fresh-enough take. The story ties the two elements together in a way that feels natural. You’ll earn resources to help grow your crops as you battle enemies and complete quests. Cycling through your various tools like a shovel and watering can, you’ll till the land and plant various seeds. Since the crops grow in real time, you will often find yourself taking a break from the story-focused battles to tend to your field and harvest your rewards. You can sell these crops for money, give them to Galariland’s citizens to complete quests, and consume them during battle for various effects. 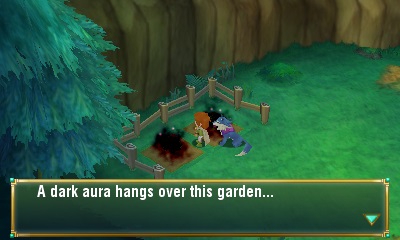 Here’s the catch: most of this farming is completely optional. While there’s little stopping you from ignoring the farming entirely at times, it’s still a nice break from the more intense fights in the game. You’ll get out of it what you put into it, and there’s no stress in how much farming you want to do. The farming mechanics are also much simpler than that of the game’s namesake. Surprisingly, one of the mechanics absent from the Story of Seasons franchise is the inclusion of seasons themselves. The system feels more inspired than derived, but there’s enough here to make the farming an enjoyable side quest.

Return to PopoloCrois is a simply adorable game in the visual department. Your journey through Galariland is a fairly lengthy one, but it’s well worth the journey for the world and characters alone. 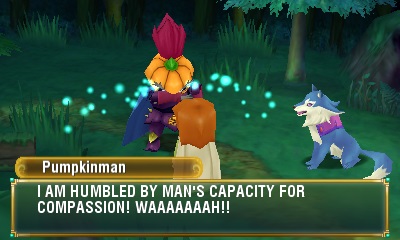 The environments of both PopoloCrois and Galariland are quite vibrant, and each town and area you visit feels unique. While your movement is relegated to a grid, you won’t likely notice by the world design. The towns you’ll visit feel lived-in, some citizens audibly greet you as you pass by, and meeting new characters in each area makes for a pleasant welcome. The only drawback is that Pietro and co. occasionally look a little stiff moving on the invisible grid, since the world isn’t exactly isometric. This isn’t a problem in battles however, since you’ll be using the grid to your advantage anyway.

It’s worth noting that apart from the in-game graphics, there’s also 3D pre-rendered cutscenes that’ll pop in from time-to-time. These dial up the cute factor of the character interactions up to 11, and seeing the cast fully animated is always a nice treat. Even the opening cutscene of the game feels ripped straight out of an anime. This is quite appropriate given that the PopoloCrois manga was actually adapted into a Japanese TV series, even before it became a video game franchise. The only drawback I noticed is that the opening cutscene has the audio levels turned up too high, which causes the 3DS speakers to rumble something fierce. No other part of the game has this problem, so just be forewarned to turn your speakers down when you first boot it up.

This game has one of the most pleasant little soundtracks I’ve ever heard in an RPG. Each area has a distinct musical style, which adds to the game’s diversity. The abandoned farm Pietro calls home has a country-style tune that only adds to the relaxing vibe of his temporary lodgings. Even battles are accompanied by sprightly tracks that keep things feeling quirky. Each track feels lovingly crafted to be memorable and fit the fairytale tone the game is going for.

Return to PopoloCrois: A Story of Seasons Fairytale is a charming experience, even if a little simple at times. While wading through the sea of similar titles on the 3DS, it’s unlikely you’ll find one that blends its ideas together this well. While the ratio of battling and farming isn’t quite 1:1 (battling is definitely prioritized), the open-ended structure keeps the farming an enjoyable distraction. If you’re looking for a more casual RPG with some unique elements, you’ll find that Return to PopoloCrois rewards you for your time. As the saying goes, “You reap what you sow”.

Danominator is a professional goof with an undying love for the 3DS, and an even greater love for a good ol' Mario game.