How far would you go for love? Would you take out swarms of cheerleaders, zombies, the yakuza, tiger face luchadors, and terminator imposters in a day? That is a tall order, but with the combined efforts of Wayforward and Arc System Works take up that task. Love is a powerful thing and the main driving force for River City Girls, not just in premise, but in-game design as well. Will love be enough for this rambunctious duo to achieve the greatness of their predecessor? Or will this spin-off end in a broken heart? 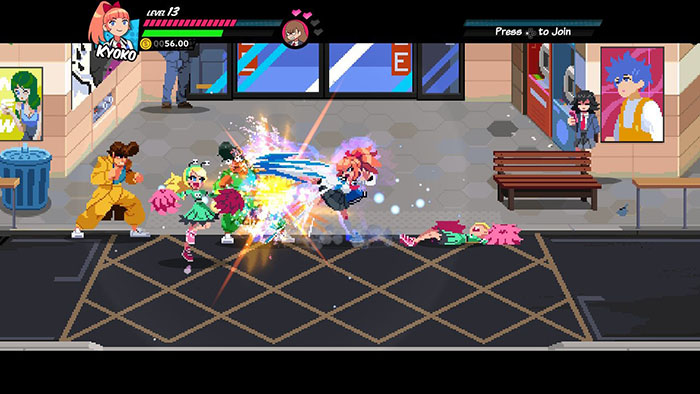 Short-tempered, outspoken, impulsive Misako and the kind-hearted, navie, but easily distracted Kyoko are two best friends that do everything together, even serve detention together. As Misako and Kyoko are stuck in detention, Kyoko gets a text message stating someone kidnapped their boyfriends. Filled with rage, Misako and Kyoko tear up the school as they escape to save their beloved boyfriends, Kunio and Rikki. No one will stop these girls, not even classmates, the cops, or zombies.

A voyage that will lead them to cross over six areas to track down and save their boyfriends. Each area has an assortment of background changes. These background changes make the game feel more lively and less of a drag to travel through. The background and shops contain references that older River City fans will pick up on. Fans of the River City franchise will easily be able to notice these throwbacks. Travel through areas that feature the mall, school, junkyards, cities, theme parks, and aquariums. The game adopts an animated pixel art style that looks like it was ripped out of the Super Nintendo’s library. The game is portrayed with a fully voice-acted story with humorous manga-style cutscenes. 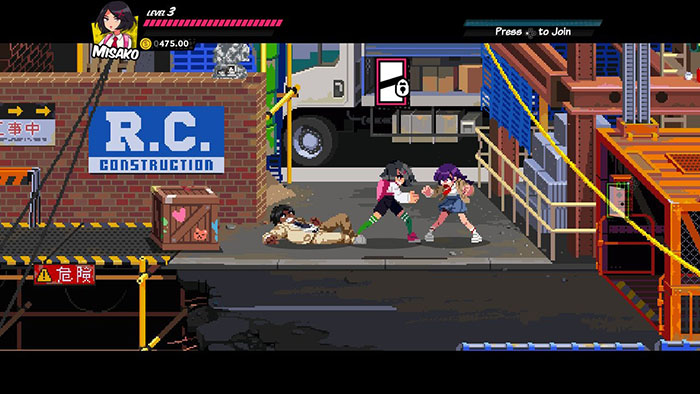 Each area is main up of a mini world of screens that players must travel through in classic beat ’em up fashion. Players can continue the long-established River City tradition of picking up weapons to use. Trash cans, baseballs, yo-yos, guitars, mops, and even a large fish that can break into a million fish chunks are some of the weapons you can use. As players travel through each area, some fights become cage off as chains wrap along the edges of the screen. Players must wipe out all the enemies before they can continue. Don’t idle too long in one area, as enemies can respawn. The game introduces a level up and accessory system. Earn moves by leveling up and additional moves will be sold in the dojo.

Unlike old beat em ups, you can backtrack between all the areas. Backtracking allows you to complete side missions at the pace you want and gives more opportunities to level up. Backtracking is a great addition, but it comes at a cost. There are times where you accidentally leave an area because you are fighting too close to the exit. This can be extremely frustrating as it throws off your rhythm in fights.

Sometimes the last enemy may ask to join you. Once the mercy icon pops up, simply walk into them and press the L button so they can join your team. Call in recruits to deal extra damage, but after using their attack you must wait to call on them again. Twelve different enemy types are recruitable and each has its own set of skins and skills. Skills range from throwing sand to launching their robotic arms into the ground. Recruits have their own set of health, so time their calls correctly to avoid losing them.

The game provides six dynamic and intense boss fights. Bosses can throw objects, restrict your movement, and destroy pillars. You will see bosses such as a school security guard to a fashionista spider that swings out webs. Fear not if you die as the game has a very forgiving life system. When you die, you only lose a small percentage of money and your recruited ally. You can counteract the boss’s attacks by equipping the right accessories. Players can collect accessories by completing sidequests, buying from shops and defeating bosses. Although you can buy accessories from stores, the stores often lack helpful descriptions. 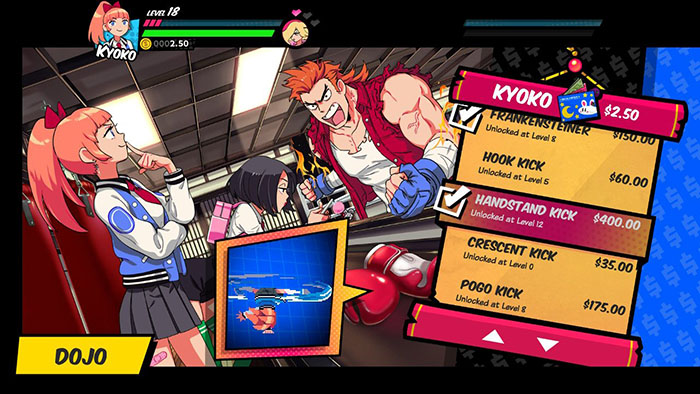 Move your character with the control stick and double-tap the stick to run. The Y button is for light attacks and the X button is for your heavy attacks. Use the R button to block. Time your block right to perform a parry attack. Grabs are done once a character is dizzy enough, you can then use any of the A, B, X, or Y buttons to perform a grab. ( Not all grab options are available from the start and must be unlocked.) There are attacks that focus on running and ones that are solely for the air. You will quickly gain new attacks by leveling up and buying attacks from the dojo. If you have a bad memory, the game features a combo list in which the player can pull up at any time to check.

The move sets are tailored made to match each character’s personality. Kyoko’s attacks focus on sports and dance. She has attacks such as a volleyball dive, dab and a handful of attacks that reference Street Fighter’s Chun-Li. This allows for a quick string of combos that launches enemies in the air. Misako’s attacks are much more up aggressive, close, and personal. Misako can take out large amounts of enemies fast with her charge attacks, headbutts, and elbow drops. Each character has unique animations and a large set of moves. The long list of attacks prevents players from becoming bored. Using each character’s move set at their fullest feels like a synchronized swimming routine. However, instead of going for gold medals, you are looking for the most stylish way to slam someone’s head against the pavement.

One would instantly assume that River City Girls would have a chiptune soundtrack as a throwback to the retro games of its legacy. However, it forgoes with following that trend. Instead, the game uses a synth-pop soundtrack. Megan McDuffee, NateWantsToBattle, and Chipzel are some of the artists you can hear. Their musical stylings create an authentic vibe that is backed up by the backgrounds and characters of the world. The outstanding vocal tracks will make you want to stick around so you can fully explore each area. People don’t often think about how music relates to the characters, but it’s incredibly believable that Koyo and Misako would listen to this music.

When writing scripts for younger characters, making them sound genuine is an intimidating job. It’s easy to make these characters sound dated. Every line of text may not be a goldmine, but voice actors Kayli Mills (Voice of Misako) and Kira Buckland (Voice of Kyoko) nail the execution with ease. They embody the tone of the character and make listening to their conversations enjoyable. The game adds a personal touch by having the avatars of Misako and Kyoko pop up out of their health bars to read their lines that are at the bottom of the screen. 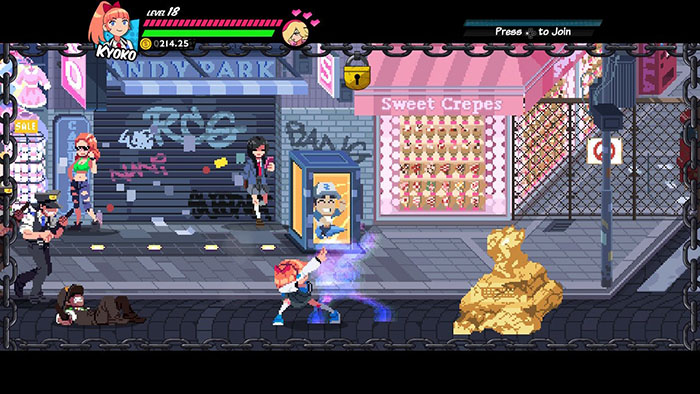 River City Girls incorporates a new game plus mode that features two additional characters. In the new game plus mode, the stages ramp up the difficulty with harder enemies from the start. Players can also try to find all the twenty fiver hidden statues, complete the full list of recruits, and beat all the sidequest missions.

The only other replay value is playing with someone locally. Adding another person brings the game to a higher level of play. Being able to work with another person brings setting up combos to the max peak. A second player can join the game at any time, but beware that their level may not match yours. If you want to test your communication skills or if you hate the person you are playing with, turn on friendly fire for a harder challenge. This way, you must focus and work as a team or go toe to toe to see which person is the last one standing.

River City Girls is available now on the Eshop for the price of $29.99. If customers want a physical copy visit Limited Run games to preorder a copy for the price of $34.99. Preorders are open until September 30th.

River City Girls takes the peaks of beat em ups and adds modern charm. The vast move sets, recruiting system, ability to use accessories and the improve life system bring a freshness to the genre that lets a broader range of people that are able to enjoy the genre. Although these quality improvements are great, it’s still missing an online co-op mode and a few questionable design choices hold it back from pure greatness. Even with these few small setbacks, River City Girls can be and should be appreciated by everyone.