There is a quest named Samurai and Hunters United in Shin Megami Tensei IV. Basically, a hunter wants to defeat a demon named Asura that is rampaging in the Ouji area of the game. After receiving the quest, to complete it, you will be required to find Nozomi, then hunt for Asura. This guide teaches you where to find Nozomi and how to defeat Asura.

Note: you must accept the quest before you can find Nozomi and Asura.

How to find Nozomi

Nozomi isn’t tough to find. The quest info says that she wants to meet up in the Ambassador Cafe near Ameyoko in the Ueno District. The first thing to do is go to the central underground district of Ueno. It’s the first safe place in Tokyo that you would have encountered. The Black Market, the Ueno Hunter Association and item shop are also located there. You should know where that it. From there, go upstairs to Ueno – Ameyoko Way.

Note: Names should be displayed on the screen as soon as you enter the area in the game. Area names are also displayed at the top of the bottom screen on the Nintendo 3DS (the touchscreen) when the in-game menu is closed.

Do not go to the next area just yet after entering Ameyoko Way in Ueno. There is only one door that does not lead to another area, and that’s where you will find Nozomi. There, she will give you more details about the quest and team up with you during the quest.

How to find Asura

Exit Ueno and go north like Nozomi said. You will have to take a right turn at some point during the journey or you will encounter a dead end if you keep moving up. Eventually, you will meet a river that you can’t cross alone. Pay the hunter around the 200 Macca price range to crosss the river and you should be at a desert-looking environment. Keep moving and you will eventually find Asura as a pink colored enemy on the map.

Note: Make sure to carry enough Macca to get back.

How to beat Asura in Shin Megami Tensei IV 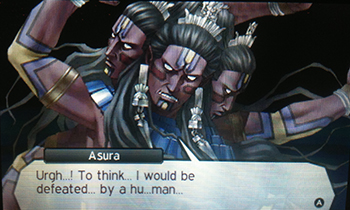 ( Screenshot of what Asura looks like in Shin Megami Tensei IV )

Demons that I used against Asura :

If you do not have any demons with ice element attacks, check to see if you have either a Mabufu stone or a Bufula stone. They are both items, however, they can be used by the protagonist as a ‘one time only’ attack. Demons with a special skill can also use these items.

Also, you can keep trying a one hit KO skill to see if you get lucky.

What do you get after defeating Asura

Nozomi rewards you with the Silver Mars item after defeating Asura.