Relive the warring times and fight your way to victory in this action-packed game. Make tactical decisions and win over the enemy army. Experience the story itself, with the choices at your command. The newest game for the Samurai Warriors series is here and offers its gameplay style to the Nintendo 3DS.

GAMEPLAY
In the beginning of the game, you start off with the ability to choose and customize your own character, and joining in Nobunaga Oda’s reign to bring peace to the land and unite the different lands in the country of Japan from its warring states in the Sengoku Period. Following upon the timeline in Story Mode of the game, fight off against opposing enemies from their clans to bring victory and end the war.

Playing through the different battles are the main basis of the gameplay. You fight across a vast battlefield while clearing objectives and the boss enemy commander. Each battlefield has its own unique design and structure, making the decisions you make quite crucial. You won’t be fighting alone though. Other ally commanders throughout the battlefield will be there. You may switch between them and issue commands to them, creating an exciting battle experience to the player, and adding a slight taste of strategy in the gameplay. Apart from the battles in Story Mode, you’ll also be able to meet with certain officers before and after different battles in different scenarios to increase your relationship with them depending on the option choice you choose. The more favor you have with the officers, the better they’ll perform in battle. 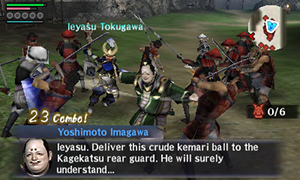 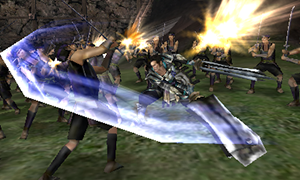 Aside from the main Story Mode experience, there is also another mode which is the Challenge Mode. In this mode you traverse across a level, completing objectives while earning as many points possible to escape through stairs before the time limit runs out. These points can be exchanged for items and other stuff. You achieve a score based on your performance which can be submitted and compared in an online ranking system. Challenge Mode makes a nice alternative mode to another competitive gameplay perspective by reaching the top.

During gameplay, there are three main attacks: Regular, Heavy and Musou Attacks. You can combine different attacks to perform power attacks and other combos as well. Weapons and items can be equipped to alter your attacks and stats, which are obtained as you progress through the game. Weapons can be fortified with elements to have extra stat boosts and an added effect based on the element. There is also a level system to level up your warriors to increase their base stats by battle experience and alternative methods. Amongst these, many other mechanics were introduced for an invigorating experience gameplay. However, the interface may not be as profoundly clear when one first begins playing the game. The map is quite confusing to understand as well as some objectives. Controls are also a bit complex in some ways but players usually eventually adapt to this over time. Gameplay can also be a little cluttery at times which is another downside. Most of the gameplay and mechanics are unique to its own experience and therefore still enjoyable. 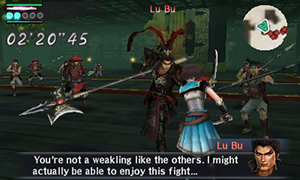 Options for gameplay can be changed to suit the player. This includes options such as the Button Inputs and the Volume Settings. You will be able to fast-forward or skip through text, and difficulty ranges can be set in both Story and Challenge modes making the game enjoyable to anyone new to the series gameplay or those looking up for a challenge.

GRAPHICS
The graphics in the game are relatively good. During gameplay, the graphics were presented quite clearly although the textures weren’t exactly smooth. From other viewpoints of the game however, the graphics are well done. The 3D effect is also well in depth and blends in suitably with the character models and environment. A majority of the backgrounds and environments are sturdy too, though some points are blurry such as the sky. Overall, the graphics are considerably satisfactory though minor improvements could have been made.

SOUND
Sound and music in the game are very spectacular, which turns out to be an excellent point in the game. While a majority of the music has a more traditional theme to it, they are all very clear and vary much throughout the game. Being another aspect in this is the character voice integration. All the voices speak Japanese (with English subtitles, of course) which is both clear and accurate.

CONTENT
While Challenge Mode does serve as a main part of the game’s replay value, there are also many other features and things you can do that the game has to offer. By clearing certain objectives outside the gameplay, you unlock rewards in a Battle History achievement system; much like a treasure hunt. Play tracks from different stages and scenes in the in-game music feature. There is even an encyclopedia with biographies of different officers and other information on the battlefields which can be viewed. You can also earn special scenes by gaining enough favor from certain officers. Much alongside the content the game already offers, additional DLC can be purchased online which includes things such as outfits, mounts, scenes and much more. Added streetPass and spotPass features bring more excitement with their different functions. The game provides a wide array of content, though it does lack any sort of multiplayer/co-op experience, which quite misses out on that potential. 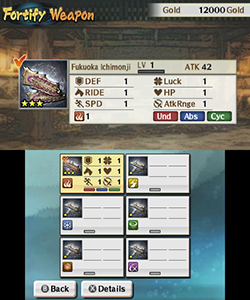 CONCLUSION
Samurai Warriors: Chronicles 3 has really proven itself to be superb in many aspects and presents itself very well, despite having a few minor issues with the gameplay, graphics and a lack of a multiplayer experience, but it has a unique style for a fighting game, giving the player both an outstanding and traditional experience. Overall, Samurai Warriors: Chronicles 3 makes an exhilarating game with rich gameplay action; it always has a wind of excitement as you play. I can hardly say the game has any repetitiveness in the way the game was presented, much to the fact that anyone can delve into the traditional story and have a great experience, thus concludes the game with an 8/10.