Ah, the classic SEGA arcade games. Rich with new graphics, story elements and entertaining for its time! Today, we take a look at Space Harrier, a SEGA third-person shooter arcade game that paved way for the shooter genre to make bolder and cooler games as well as see its own re-release on Nintendo Switch.

Within the menu of SEGA AGES Space Harrier, there are some things to take note of; Original mode, Komainu mode, and Freestyle mode.  The Original mode of the game plays like the standard arcade game released 1985. The controls feel a bit too tight when playing in handheld mode and shooting seems straightforward; press the A button on the controller to shoot laser bullets at an oncoming barrage of draconic and ancient enemies in order to progress through the stages as well as B and the shoulder buttons (L, R, zL and zR) for a Rapid Fire shot. Moving around in the game, however, takes some getting used to. Up on the joystick is down and down is up. It feels like playing an arcade style game though, seeing the feel of the joystick on the controller feels similar to a joystick on an arcade machine when playing this game. Original Mode has a set amount of continues to progress in the game, so every movement and shot counts. Komainu mode is exactly like Original mode, but players have unlimited continues and a shield that will protect the player once from any oncoming damage from enemies. 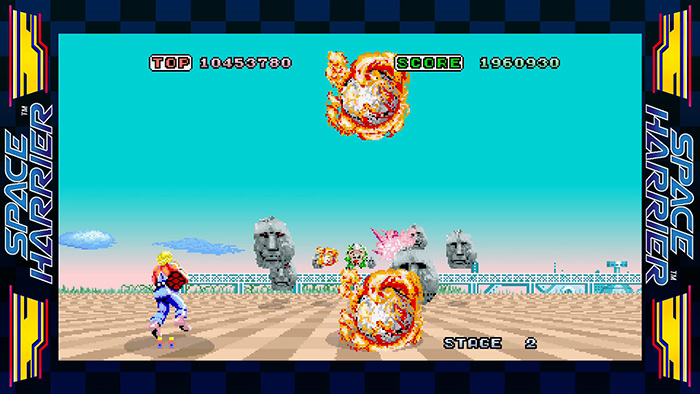 As well as a new gameplay mode, there is also a Ranking system. The Ranking system connects online to display the best score as well as your own, allowing you to compete for top score with players around the world. Freestyle Mode is a game mode in which Players shoot enemies for an unlimited amount of stages until they drop. There is also a Ranking system for Freestyle Mode.  What makes the game unique is that players may customize time, lives, graphics and more within the settings of the game. Players also have the option to load from save states and replay their own plays, as well as other player’s replays on the Rankings Menu. 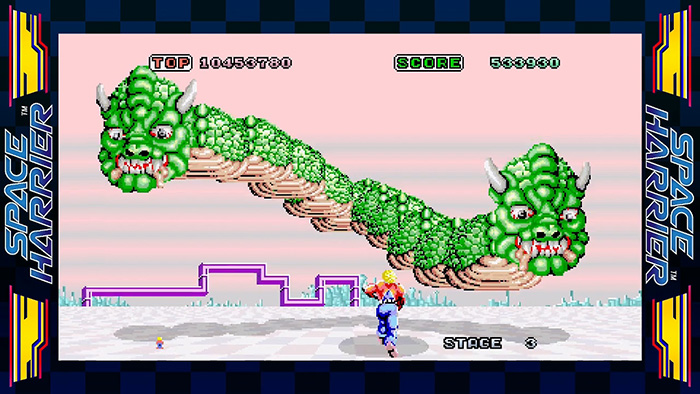 Overall, the SEGA AGES Space Harrier game is fun and a good time killer. While the controls are the only notable flaw in the game’s design, the game itself has charm and challenge within its stages and enemies. If you want to experience an arcade classic that makes you feel like you are playing at an arcade, this game is definitely one of those games for arcade and retro gamers.

Sammi loves Pokemon and their fascinating properties and powers. Everyday, Sammi's curiosity is peaked by the wonderful imaginative world of the Internet and enjoys only the most refined of memes.