Finally, the latest Shantae adventure has reached the Wii U, being the series’s first release on this platform (and not the last one, considering Shantae: Half-Genie Hero), being a sequel to the acclaimed Shantae: Risky’s Revenge on DSiWare (also the first HD title of the series since it was remastered for mobiles and PC).

Basically, Shantae and the Pirate’s Curse is a 2D platformer with metroidvania elements, a mix that fits well but feels that can be better executed: The level design is pretty good most of the time, like those old 16-bit games, but sometimes it can be really simple during segments of the game. 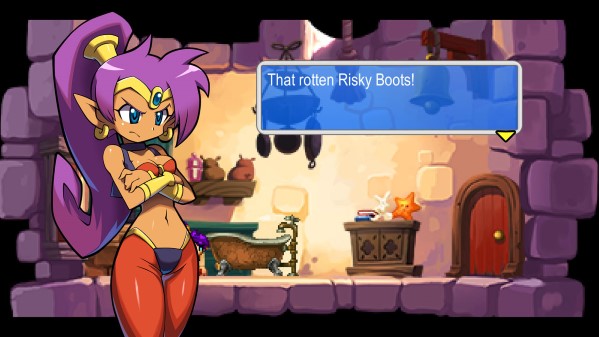 With that said, the game wants you not just to platform, but also explore, being a vital element in order to progress the story, upgrade your character and also obtaining the true final ending. A little detail (that some won’t like) is that you’re in your own, no help is given.

Now, since Shantae is no longer a half-genie this time, but a normal human, she can only count with her hair in order to attack enemies. But how she can get stronger? By collecting gems you can upgrade how strong and fast is your hair attack, including a few abilities that will help in your adventure.

Meanwhile you advance in the story with the help of Risky Boots (in this game, you join forces with Shantae’s nemesis), you will find heir weapons and accessories you will use to gain new abilities, such as her pistol (long distance attacks), her hat (glide), her scimitar (attack enemies or hit objects below you), her boots (run faster, and attack everything in your patch with the sword) and a cannon (multiple jumps).

During your adventure (hidden or not), you will find Cacklebats you need to beat in order to get dark magic needed to get the true ending and Squids, where getting four of them will give you an extra heart.

Meanwhile you play on the TV (or the Gamepad with the off-TV) you also have access to an inventory (with items you can win from the enemy or buying them). Basically, they’re two types of items: for restoring and for support.

The restoring group contains food and potions you can use for recovering health, including one that will work once you lose all your life avoiding the game over screen.

The supporting one includes a shield that reflects certain attacks like bullets, a drink that makes your attacks stronger, spikes that attacks the enemies around you and an item that allows you get back to the entrance if you’re outside of a dungeon.

The controls are great, and the duration is pretty good as well: it took me 8 hours to get a 100% save but an average player should need around 10 hours. Once you finish, you can start a new save having all the pirate skills enabled (the Pirate Mode) being a great mode for speed-runners. 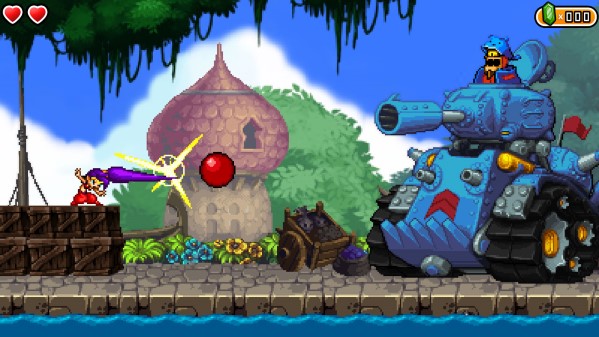 About the difficulty, I think the best way to describe it is average. Some segments are easy to beat and others are really hard until you get used, I personally found most of the bosses (including the final one) really easy to beat, being a small disappointment.

Another detail I didn’t like are the maps: they are pretty basic, and despite of showing the rooms limits and the saving rooms, it doesn’t show where the exit is. A small detail indeed, but an annoying one.

Basically, the game’s graphics are similar to the 3DS release using detailed sprites, a smooth gameplay animations and great quality backgrounds and character art. Since there’s a big gap between 240p and 1080p, the image quality on the Wii U version is far superior in order to avoid a pixelated experience… uh… aside from the pixel graphics.

And before you ask: yes, there’s plenty of fan service like in many WayForward titles and some humor that easily explain why this is an E10+ title instead of an E one. This is just a matter of taste (I don’t mind some fan service). 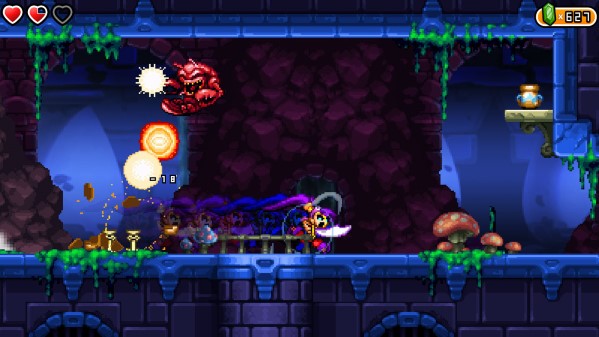 The soundtrack is just amazing; there’re so many tracks full of energy and that “adventure feeling”, it’s a fantastic piece of work overall – the only flaw being how repetitive some of them can be. Since I played both Mighty Switch Force games and listened to the Shovel Knight OST, it’s easy to identify Jake Kaufman’s style in most of the songs, and being honest, he is now my favorite indie composer…

The presentation is also nice, and thanks to the Gamepad you can still play it with two screens at the same time like in the handheld offering… or play with just the controller on the bed thanks to the Off-TV mode. If you don’t like the big controller, you can always grab your Wii U Pro Controller or your Wii Remote with either Classic Controller. The manual is really simple but it explains what you need to know and the game’s duration is lengthy.

Conclusion:
The price tag can look heavy, but this is a retail-quality game like the ones you can find in stores and is really worth its price (at first I was surprised that this wasn’t cheaper, now I’m surprised that this isn’t for $25 or $30). WayForward is an amazing developer and this is evidence of their experience making games and their love for Shantae, a must-have for any owner of either systems!