More often than I wish, I find games designed to resemble retro releases dull, restrictive affairs that claim and try to dish up sweet nostalgia but instead are so terrible that one wonders what was so good about retro titles anyway. But some time ago Vblank Inc. released Retro City Rampage DX, a retro-themed game that showed that current games could possess, one way or another, the magic of retro ones. Recently Shovel Knight, one of the 3DS eShop’s most-hyped titles, arrived after a lengthy development period. The game is Yacht Club Games’s first release. Obviously the second most burning question on everyone’s mind after, “What’s for dinner?” is, “Was Shovel Knight worth the wait?”

Shovel Knight tells the story of a small knight wielding the mighty ShovelBlade, adventuring in a fantasy world that seems to have been influenced by that of Zelda II: The Adventure of Link. One day, while he and his beloved Shield Knight enter the Tower of Fate, an evil amulet knocks them both flat. When Shovel Knight awakens, Shield Knight is gone and the Tower seals itself after his exit. Drat that amulet. It could have been beautiful between the two.

Once the Tower of Fate is reopened by the scheming Enchantress, though, Shovel Knight embarks on perhaps his most epic adventure yet: taking down the Enchantress and her Order of No Quarter while rescuing Shield Knight.

If you ever thought that no one would never come to care for a small, short, voiceless knight except his parents, then Shovel Knight can prove you wrong. Somehow or the other the developers made the character endearing enough (most likely because they weren’t afraid to make him look foolish every now and then) that I really did care about how the story turned out, which is pretty amazing for a game whose character doesn’t exactly have a face. 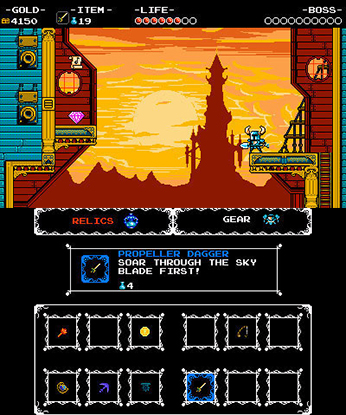 But the gameplay is what everyone reading this will probably have scrolled down to read about. Shovel Knight uses only two actions for the face buttons. You can jump and you can dig, and that’s all there is. Actions such as a downward thrust while jumping (one of the most important moves in the game) and using relics (‘special items’) are carried out by using a combination of the face buttons and the directional buttons. The simple control scheme helps with the retro feel and works quite well, especially if you use the Circle Pad for the directional controls.

Shovel Knight – an action platformer at its core – shows influence from a lot of retro games – the good bits, that is. The game is challenging but not frustrating. Hand-holding is almost non-existent though, so you should read the game’s digital manual before you play it. Having a tutorial would be pointless anyway, because the game continuously lets you find new ways of getting through the well-designed levels – and the, “A-ha!” moment when you figure it out is immensely satisfying.

Gold is important since you buy everything – health, relics, items with it. Shovel Knight can dig up dirt, navigate treacherous rooms to open treasure chests, and even ‘fish’ for treasures in certain spots using relics. If you die, you lose a third of all your gold at that spot and can go back to reclaim it – if you’re brave enough to risk going back to the spot where you died, because if you die again you lose a third of your gold again and the previous batch of the money you saved and scrimped and then lost disappears.

The visuals are somewhere between 8-bit and 16-bit, and are gorgeous. The retro art style isn’t used as an excuse for getting away with a lazy job on the graphics. The 3D effect makes things even better, adding a sense of depth and some effects even jump right out of the screen. Shovel Knight was one of the few games in which I wanted to keep the 3D effect on while playing. The retro soundtrack is well done and and the sound effects fit in well with the gameplay. 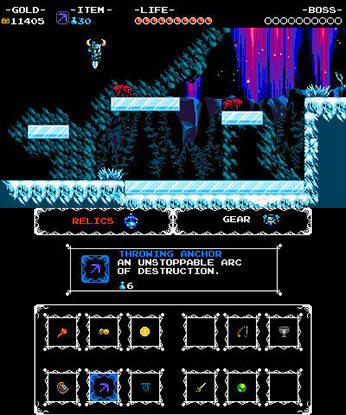 The game is presented well with retro menus and quick load times. The references to classic games and the influences that show are nice to spot for anyone who has had the pleasure of playing 8-bit and 16-bit games. The game’s default controls use B as the ‘confirm’ button though, as it would be on other consoles, which was somewhat confusing at first after using the A button as the ‘confirm’ button for pretty much every 3DS game ever – but you’ll get used to it.

‘Feats’ are achievements that you can unlock as you go through the game (don’t expect to unlock them all easily) and you can collect music sheets and give them to the Music Bard (whom I like to think of as the musical retro equivalent to the merchant in Resident Evil 4) who’ll then let you listen to the game’s various BGMs. These features, along with the ‘New Game +’ option, increase the replay value by leaps and bounds.

Shovel Knight is an almost-perfect game. Yacht Club Games put a lot of effort into it and it shows. The game is fun to play, has humour and is both challenging and rewarding. The price may be high for an eShop game, but there is enough content in the game to warrant it being so. If you were even slightly interested in the game before its release, go ahead and buy it. If you weren’t, then you should at least seriously consider it. It’s a brilliant title that shouldn’t be missed.