Shuttle Rush is a 2D-platform runner and if I were to compare it, I would say it’s like Super Meat Boy but quite harder with a time limit… So yeah, it’s really challenging (and frustrating for non-skilled players). The game is broken into six worlds and each includes five main levels, one boss and a bonus level making a total of 42 levels (don’t worry, the game will keep you occupied for a couple of hours).

Basically, in each level you need to find the exit while avoiding enemies, jumping platforms and pressing switches before the timer reaches zero. Since the levels are mazes, you’re required to play and memorizing (as well as think up a strategy for which routes to take) the level by trial and error. You can also find coins across the levels that you can use on Oxygen system: each coin will add four seconds to your timer. In addition, you can also find a weapon that is capable of stunning your enemies which you will need in some levels in order to progress. 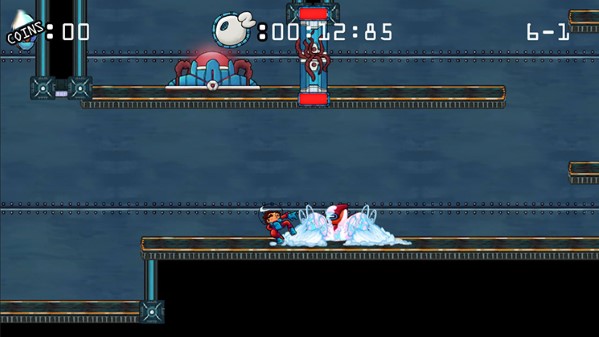 With that said, the best way to play the levels is using the Gamepad as a second screen since you need to do a lot of exploration because having the map without pausing is really handy and makes the game less frustrating as well.

The boss levels have one difference when comparing them to the normal levels: you’re racing against an enemy that blocks your exit. If you’re slower, you will lose. Sadly, those levels don’t feature a map and can be pretty frustrating with the time.

Finishing a level gives you access to the next, still you have three different achievements for each level: one for beating the level in a determined time (or faster), another for reaching the exit without being hit and one for picking up all the coins (it doesn’t matter if you spent it). Since you can’t get the three at the same time, this adds plenty of replay value.

If you unlock the 18 achievements in the world, you will unlock a bonus level which is a bit more difficult to beat… if the normal levels aren’t challenging enough. Since I was only able to unlock one bonus level, I’m not sure if there’s a difference between those. 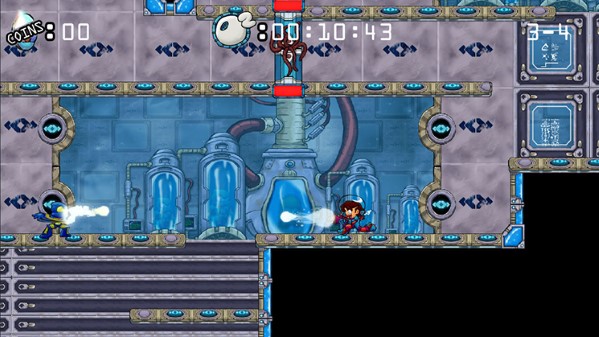 Graphically, the game does a good job despite its simple looking graphics which are pretty varied but there are plenty of details and drawings used for the game’s presentation and a smooth framerate that helps it to be really precise. The soundtrack is well done as well, using different chiptune-electronic tracks resulting in a nice mix between both genres.

The presentation is fantastic, the manual is great, the details for the interface varied, there is an online leadboards for each level, plenty of levels and a lot of controller options are supported that works flawlessly. My only complaint is the lack of a practice mode since the difficulty can be really hard.

Conclusion:
Shuttle Rush is not for everyone due its extreme difficulty, however, it’s really worth it for skilled players who want a challenging game with a good quantity of content. Actually, if it wasn’t for the title’s difficulty, I would recommend the game to everyone since it’s greatly done.