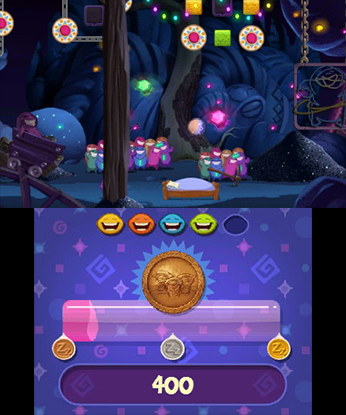 GAMEPLAY:
The mechanics of the game are pretty simple: it’s side-scrolling paddle-and-ball block breaking with some arcade elements from Pinball games, or side-scrolling pinball breakout for short.

In Siesta Fiesta, you must destroy as many blocks as possible to get the best score while you try to survive from not falling off the paddle… I mean, your bed. More points will increase the juice bar allowing you to get larger medals. The default one is the Bronze medal, the Silver one is easy to get if you play nice but for the Gold one… you need to master it.

In every level, bouncing is a required skill. If the ball (the little guy that is sleeping, his name is Siesta) touches the ground, you will lose a life, and when you lose the five lives, you will have to start the level from the beginning. A good way to win more points is by making combos, breaking more than five, ten or fifteen blocks in a single bounce.

Time Trials and Boss levels work a little different, where instead of using a score, it uses a time counter, being faster the better. Time Trials are quite different from the normal play, instead of getting the side-scrolling part, you will have different waves you need to destroy. For the bosses, each of them has its own way to be hit, using both old and new ideas.

Some levels use a different paddle, using a fan and a cannon. Those offer a different gameplay style, and also, another type of challenge. With the Fan bed, you will make Siesta float, and with the Pooper Bed (the cannon), you will shoot him upwards needing to catch him before shooting him again. 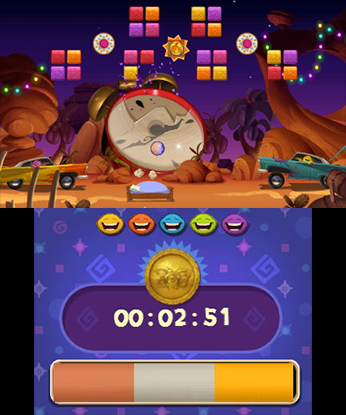 Siesta Fiesta is really easy to control, having two different methods available: the first one uses the console buttons, and it’s excellent for a comfortable experience meanwhile you enjoy the 3D effect. The second one is with the tactile screen, being excellent for faster reactions and for mastering the game itself.

With the buttons, you use the buttons A, L and R to boost your shot and the Control Pad and the Circle Pad to move the paddle. With the stylus, you need to drag in the tactile screen to move the paddle and boost with just tapping the screen. Of course, the Start button will pause the game.

The game includes a tutorial level that explains the basic stuff of the game, and the first world is pretty easy with the intention of getting used to the gameplay mechanics. Still, most of the original stuff from the game appears since the second half of the game, presenting more gameplay elements.

The game present a total of eight regions, meanwhile not all the regions have the same quantity of levels, nor the different modes, all of them have the boss level. The game presents a good quantity of levels that will give you a gameplay of around two to three and half hours to finish (depending of the gamer skill, it can be more), and there’s a lot of replay value trying to get gold in every level, or at least the silver one.

The game mechanics and physics are excellent but there’s an element I missed: the power-ups and items and there are plenty quantity of both elements. The items are basically the objects that will appear in the level, such like the bumpers, the piñata blocks, switchers, fans, fountains, timer switchers, fire blocks and more.

For the power-ups, they are four (if you lose a live, they will stop): 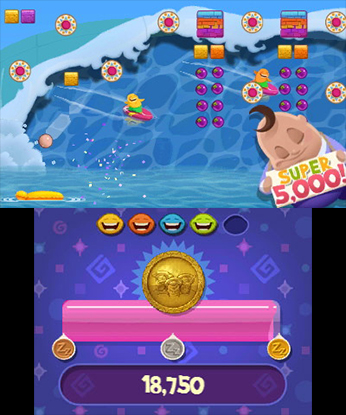 GRAPHICS AND SOUND:
Siesta Fiesta looks excellent (a little blurred in the 3DS XL), a good 3D effect and a smooth 60fps frame rate, where the eight different regions present a unique style with a lot of details included, including the animations used in the game.

The soundtrack, for the other side, is really good but quite repetitive in general. Still gives me a smile sometimes. There’s a good variation of sound effects too.

In overall, the audio and the graphics quality are excellent, making an excellent companion to the gameplay and doing a memorable game.

PRESENTATION:
The presentation of the game is excellent, where everything is included: one of the most complete manual for the 3DS eShop, replay value, a good tutorial, a friendly user interface and two different controls.

This is just an example of a polished game from an indie developer. If I have to find something bad about the game, it can be the high difficulty for the gold medals, but without a challenge, there is no replay value.

CONCLUSION:
This is a lovely work and an excellent option for 3DS users, most for those who want to search for a new way to play classic games. It looks excellent, sounds really nice and the gameplay is awesome. I want to play more, if I have to be honest.