I can believe if there are people who do not know about Mario, and hardly do it when it’s about Tetris… but I found it almost impossible to find someone who does not know about Snake, mostly considering it was the game included in the cellphone’s boom with the interactive functions and SIM support after those “brick phones”… Not to mention those cheap LCD ‘999in1’ toys that people gifted to kids.

Now we can experience the classic game again thanks to Game Bytes, since they released Snake Den on the Wii U eShop featuring local multiplayer and lots of different levels for $3.99. Now the real question is… is it worth it? 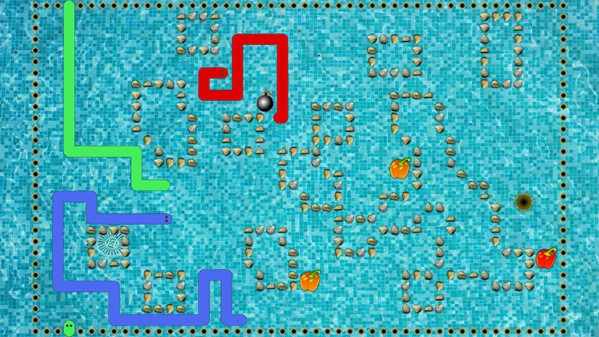 The game is pretty simple: you as the snake needs to eat fruit in order to grow longer. Once you’re long enough, a mouse will appear (one per snake) and eating it will unlock the exit. Touching a bomb, eating yourself or another snake will make you shrink and the same rule applies to the other snakes.

The items you can find are pretty limited: a mushroom that will make you faster, a smaller fruit that makes you even longer, a bomb that damages you (I already mentioned this one) and a harder fruit that needs to be bit three times.

There are five different worlds you can play (the only change is the background) with twenty levels each doing a total of 100 levels, however, only the first level in each world will be unlocked. In order to unlock everything, you will need to play level per level. There’s also a small achievement once you finish a level: the three mice, where it works like the classic three star system. 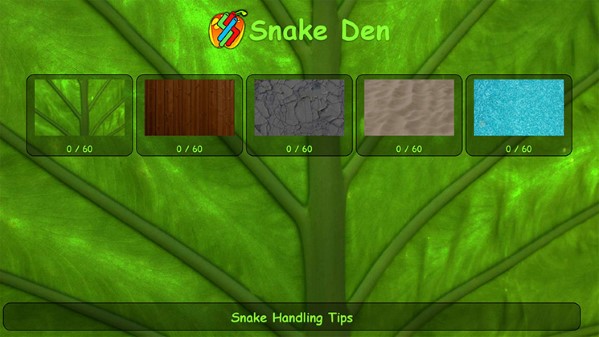 You will also notice different dots on the level map in the level selection screen: purple ones are portals and red one permanent bombs. Now, despite being a basic rule in most Snake games, touching the wall won’t kill or damage you: instead, you will move to the snake’s right direction (like a clock).

There is a variety of controls you can use to play, meanwhile the player one is limited to the Gamepad using buttons or the touchscreen, the other two players can easily grab a Wii Remote (and Plus), Classic Controller (and Pro) and a Wii U Pro controller to play instead of the CPU. Meanwhile the controls work nice, the Wii Remote is hard to recommend since you need to use it vertically so instead of playing like a NES controller, you will be using a TV remote to play, and that’s not comfortable.

One additional thing to add is that the game lacks challenge or speed, where a higher difficulty or a faster velocity option can actually make a major difference. With that said, some levels for its design can be pretty boring due to the title’s speed. In addition, the CPU’s AI can be better. I found many situations where the snakes just move on circles due to the level’s design, or they just don’t decide where to go. 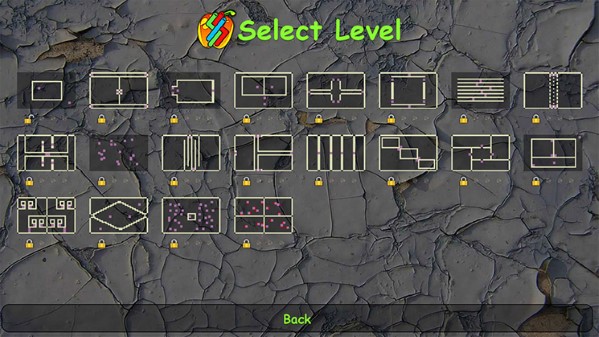 As a game that offers quantity, it pretty lacks of quality: like I mentioned earlier, the only variations between the five worlds is the background. Meanwhile it’s really simple graphically, it won’t be the deal breaker of the game: the lack of music does. With that said, the title only features a few generic sound effects resulting in a lacking experience.

Even with some lacking aspects making a mediocre presentation in overall, but at least it does a nice job offering an easy interface and also including the needed explanation of the title.

Conclusion:
Snake Den offers a large quantity of levels, however, the quality aspect is really lacking, making it hard to recommend considering its price tag. With that said, those interested should wait for a discount.