GAMEPLAY:
The concept of the game is simple and if you’ve played Sokoban before, you will get the concept easily; you need to move the crates on the levels (horizontally or vertically), to a transit target or a frozen target square.

Some of the crates you move will have momentum, as explained in the manual. The crate will feature little arrows explaining the presence of this feature, and when you push one of those crates to a direction of the arrows, it won’t stop until it hits a wall or the character. Moreover, you can also use one of those to move another crate with momentum.

There’s also different puzzle element in the games such as doors. Those can be opened or closed pressing a switch. It can be done with the character or a crate.

Another type of switch available are for movement floors, those work every time the character or a crate moves over it. They work not only for doors but also for rotary squares.

There are two types of rotary squares: the back one makes the momentum crates move backwards, eg. bouncing in contrast to the left-right ones which makes them rotate 90 degrees. On the levels, you can use those to move crates around the level, and with switches, you can change the orientation of the squares.

If you’ve made a mistake, there’s a little feature pressing the L button: you can rewind the game for up to one minute (60 seconds). Essentially, it’s like an “undo” function. However, there’s a trick to this, the steps and score you had will remain without any changes.

The last thing to add is the ability to skip up to ten levels and this is especially perfect when you have problems with a level. Once you’ve skipped ten levels, the option will be disabled until you’ve beaten one of those ten levels. 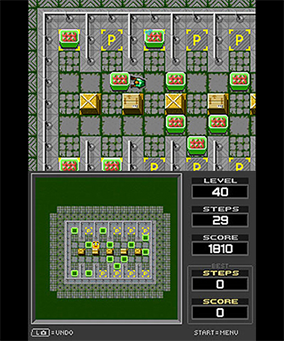 GRAPHICS AND AUDIO:
The graphics of the game looks extremely nice for being a DSi Ware game, with a nice quantity of designs for each of the levels.

Additionally, there would be the map on the bottom screen which substantially helps on levels when there’s some action in the background. For example, when crates are moving and you want to watch it without using the camera.

Something interesting about the audio is that they’re using their own music composition software for the DSi, Rytmik. The few songs available in the game are nice and relaxing hence making them a great complementary for the game. The FX sounds of the game also are good, but some of them can be better.

PRESENTATION:
The presentation of the game is good.

They explain how to play the game, the menu is easy to use and there are a good quantity of levels.

A critique however, is that it possibly needed better tutorial levels for some minor stuff in the game.

There is also a leader-board system available in the game. You only need to submit your game code to the website and it’s a good solution when the DSi online servers will be closed soon. I tried it when I was playing part of the game and it works excellent.

The game also gives you the chance to make three profiles which is a nice touch if you share your console with other people.

CONCLUSION:
For just 200 Nintendo Points or $1.99, this game offers a substantial amount of content. It’s fun and offers a lot of levels which is especially great for puzzler lovers. If you love Sokoban, I can’t find a reason for you not to buy this game. There is also some replay value if you try to get a better score for the leader-board system.