GOTTA GO FAST? GET THE OTHER VERSION. 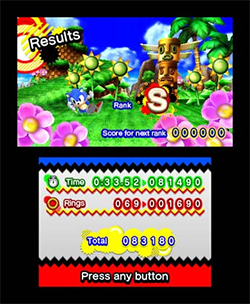 STORY:
The story starts on Sonic’s birthday party. Then, a monster appears kidnapping Sonic’s friend while also erasing and draining the color and life of some worlds. Sonic runs to the monster trying to save his friends and the world.

The story takes place in White Place, a realm where time and place appears when they have been removed, and like the usual Sonic plot, there is a story twist that you’re going to see coming and an end that you will also see coming.

The differences of the story on both versions are really small, so I don’t need to explain them.

GAMEPLAY:
The game offers the chance to play two versions of Sonic with different gameplay. Meanwhile, the HD version of the game offers 2D and 3D stages, the 3DS one only has 2D levels if we don’t count the special levels.

I think the best way to explain how the game is played is using categories, so here’s a little list with the different gameplay of the game:

– Classic Sonic:
Like the 16-bit games, you will play 2D levels as a normal platform game. You jump on enemies, collect rings, spin dash, get a shield, etc. In addition, you can also unlock the Homing Attack later. The Homing Attack is a move that allows you to attack enemies in the air and this break the classic formula just like we saw in Sonic The Hedgehog 4.

In this version, Sonic is a little slow, and if we compare the Classic Sonic from the HD Sonic, it’s mediocre. You can master it but you wouldn’t enjoy it like you should. Another point to add are the physics, those aren’t perfect either.

Using more classic elements than modern, this Sonic is better done, but it still has some problems when using him, mostly when you’re learning how to play those levels.

Later we have more boss battles – Big Arm (from Sonic the Hedgehog 3), Biolizard (from Sonic Adventure 2) and Egg Emperor (From Sonic Heroes). What do they have in common? They’re not epic like the original.

The only good thing is the 3 boss battles are played in a different way, meanwhile the difficulty is different for every boss, the only problem with those is the execution. With this, I mean they’re mediocre.

The final boss is something I found somewhat better than the HD version. On this boss you swap 2D and 3D version, the challenge is great for a final boss and it’s memorable at least. It can be really long for some players due its difficulty, but it isn’t too much memorable.

– Special Levels:
Like it’s normal for Sonic Handheld games, they have the special stages that allows you to get the Chaos Esmeralds which are needed to beat the game. This time, the levels are like the special stage we saw in Sonic Heroes, but you play only as Modern Sonic with a little differences.

I found those fun and I really like them, and those have a great challenge if you want the S rank because you must be almost perfect to do it. 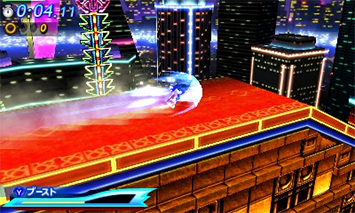 Now, the controls of the game work well and are easy to use, but some levels will need a lot of skill and the 3DS XL is the better option to play the game.

The level design is normal, nothing memorable, but not bad either. Sadly, the last two levels are quite identical to the original games. I also find it offensive that they just ported the original Green Hill level for Classic Sonic instead of making a new level.

Also, the game is too short. I’ve finished the game’s story with all the S ranks in just 8 hours. With a $30 price tag, this game is a little expensive for the content it offers. The game also offers less levels than the HD version as you can see from the list below:

Something else to add are the missions. They use the Streetpass feature where you can share the missions you bought (every mission cost 5PC and there is a total of 100 missions) and get the missions other people already have. Beating them will unlock game extras such as models, music, artworks, etc. 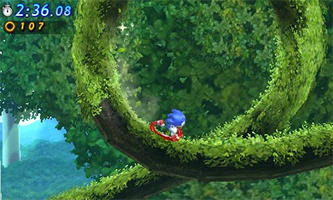 GRAPHICS & SOUND:
I would like to say this game looks nice for a 2011 game for the Nintendo 3DS, but being released after Super Mario 3D Land, we know this game could have looked better.

The 3D on the other hand looks good, but I don’t think you will like to do use it on the Nintendo 3DS XL because the game will start to look really bad.

Now, cutscenes aren’t some videos like the HD version, those are just some model animations with text boxes, no voices or anything. They didn’t even bother to use videos from the HD version. That’s no good Dimps, that’s no good.

The soundtrack has different songs with some that can also be found on the HD version, and being honest, one of the best songs remixed from this game is the one used for Big Arms, made by Cash Cash. The soundtrack is good, like most of the Sonic series, but the voice acting is lacking, a lot. 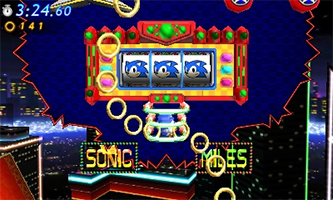 PRESENTATION:
The presentation of the game is okay, you will find everything you need. However, considering previous Dimp games for the Nintendo DS, we can see that they have not done a lot of work on this game. The game is really short, one of the levels is a port from the original one and the level design isn’t the best either. Also, the music you unlock, you can hear it in the game, but sadly you can only use it to play a level like the HD version.

‘Sonic Generations’ feels really simple if we watch previous Dimps works on the Nintendo DS or just the other version of the game. The game feels unpolished sometimes and $30 for this game is expensive. You won’t miss a lot if you don’t play it, so I recommend choosing the PC version instead.