Life isn’t always fair and more often than not, things might not go our way. In order to lead an acceptable life, we have to abandon our regrets and grudges. But this isn’t always easy. Especially after a brutal and sudden death. When this happens, the negative feelings that linger behind might take a physical form. That’s how a Spirit is born. This concept represents the premise upon which the Spirit Hunter series builds its stories.

Spirit Hunter: NG is the second and the latest chapter of this franchise as of writing this. Just like its predecessor, Death Mark, the title is a Point-and-Click Adventure with Visual Novel elements.

The game follows our protagonist, Akira Kijima, in his struggles to find his missing sister, Ami. That’s right on Akira that the malicious spirit Kakuya turned her attention. With his sister’s and his own life on the line, Akira is forced to take part in her cruel game. He will have to search for the Spirits that are protagonists of Kissouji’s urban legends and put them to rest. In case of failure, Kakuya’s curse will fall on him and his loved ones. In this desperate race against the clock, Akira won’t be alone. Seiji, Akira’s childhood friend, the bizarre goth girl Hazuki, the broke journalist Ban and the occult expert Rosé will help him. Each one with their own motives to partake in this dangerous game. 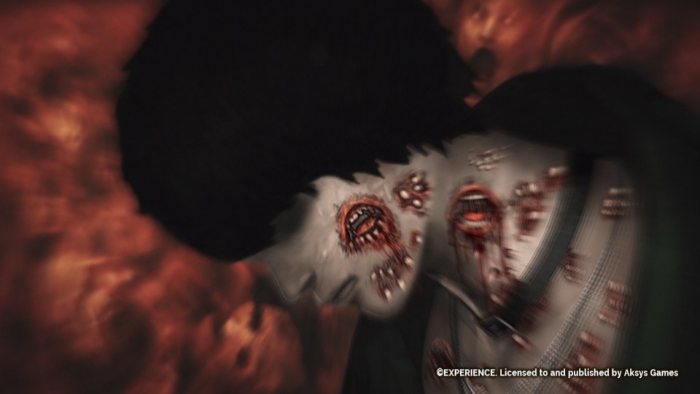 The overall plot isn’t particularly complex, with only a few twists along the way. However, what really shines in this title are the Spirits’ stories the protagonist will investigate. Each chapter opens with the retelling of a local legend, followed by Akira’s investigations. The legend isn’t always true to reality and the player has to expect more than one surprise. The game will manage to keep your interest high until the end. The main problem NG has regarding its story is that a few passages are somewhat abrupt and reduced to mere info-dumping, relegated to the endgame. Despite this, the story is presented in such a way that keeps the players entertained enough that they will address these concerns only once the title ends.

Since the events of NG take place in a relatively short timeframe, it isn’t possible to delve much in the supporting cast’s life. However, the game manages to highlight their most important and noteworthy traits. The resulting characters are incredibly likable and the player can’t but grow fond of them. Kakuya herself represents a worthy antagonist, with her childlike sadism and the aura of mystery that surrounds her. Characters alone could be the driving force of the game.

The game is divided up between Visual Novel segments and Investigation scenes.

Textual sections follow your standard Visual Novels’ style. The player will see character portraits on a static background, with an occasional CG in some pivotal moments. Akin to Visual Novel standards, the protagonist is never shown speaking, but only in a handful of CGs. From a technical standpoint, there are Skip and Auto functions and a backlog of text previously displayed. 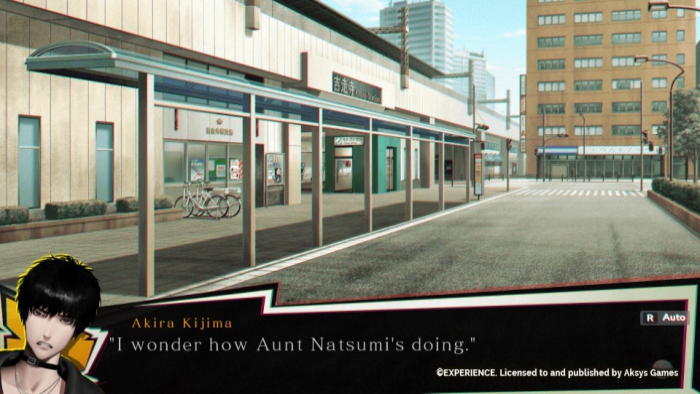 Two are the main features unique to this game: the Judging System and Crisis Choices. During certain conversations, the player will be able to select Akira’s attitude towards a character. The game will show five different expressions the protagonist can assume. They range from one of outright disgust to a blissful smile. Depending on the chosen response, other characters will react in different ways. The Judging System doesn’t have any relevance plotwise, but it still represents a way for the player to immerse themselves into the game.

Crisis Choices appear during tense and dangerous situations. The player will have to make a decision in a limited time. Should they choose the wrong one, the timer will deplete accordingly to the mistake’s gravity. When the timer reaches zero, it’s Game Over. This however doesn’t pose a real problem, since a Game Over isn’t excessively punitive. It is, in fact, possible to reload the latest save or return to a checkpoint that precedes the Crisis Choice. While this diminishes some tension from the game, it also prevents excessive moments of frustration.

Investigation segments represent the core of the gameplay. During these phases, Akira will explore the chapter’s signature location. They follow a common Point-and-Click formula, with static screens shown in a first-person view. Objects with which Akira can interact present a little glowing sign. Each interaction starts with a brief description of the element in question and further options might follow. Akira can either pick up an object, examine it further, use an inventory item on it or resort to Bloodmetry. 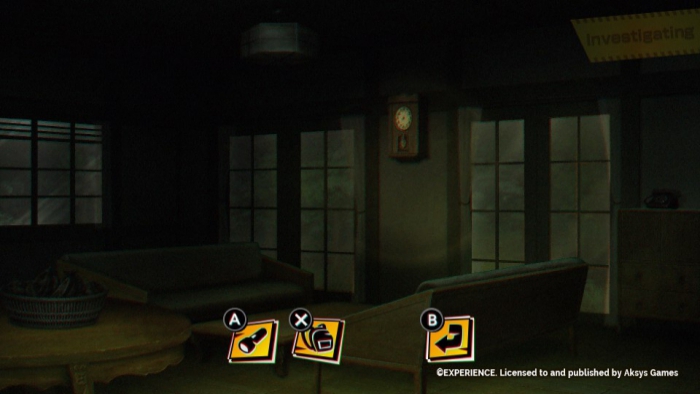 Bloodmetry is a special ability Akira possesses and is triggered by touching a bloodstain. He will receive a vision about past events related to the blood’s owner. This interesting system partially substitutes the classical notes and diaries conveniently scattered around. It manages to keep up with the creepy and paranormal-centered theme of the game and it’s coherent with the whole plot.

During each investigation sequence, the player can select a partner to assist Akira. They will provide hints to solve the game’s puzzles and additional commentaries. Assisting to the numerous banters between the protagonist and his partners is an additional source of entertainment.

The game won’t proceed unless Akira has checked out the most important places currently available. It’s unlikely for the player to miss something and get stuck. Each object that ends up in the inventory has a brief description. It’s important to read them thoroughly because they hold a lot of additional information that isn’t otherwise explained.

The final confrontation with the Spirit represents each chapter’s climax. The game will zoom out on the creature, finally revealing their features in detail. Each confrontation is divided into “turns”, during which the player has to choose a point of the static scene on which use a specific item. Selecting the wrong option enrages the Spirit even more. Akira’s gruesome death and a Game Over screen directly follows. Instead, if the player has guessed right, they’ll come across another scene and so on, till the Spirit’s demise. 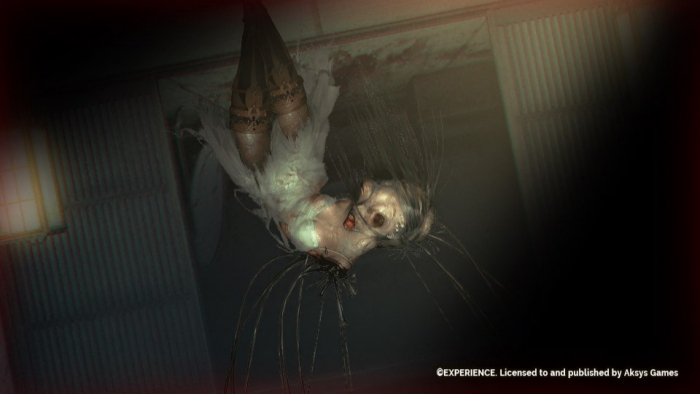 Each Spirit can be taken care of in two different ways. If the player manages to calm it down and put its soul to rest, the Spirit will be Purified. On the other way, if they end the confrontation in a violent way, it will be Destroyed. Beware of Destroying a Spirit, since an unsolved grudge can have disastrous consequences on Akira and his companions.

The game provides numerous hints on how to proceed, so do items’ descriptions. Therefore, the player is given all the means to solve each scene without resorting to external help. Some solutions might still appear far-fetched at a first glance, but the explanation that follows almost always makes sense. Even if the player cannot piece together this info, the subsequent ‘trial and error’ isn’t excessively frustrating thanks to the forgiving Game Over and the possibility to skip text.

NG’s presentation is the game’s strongest point. Character designs are pleasant to the eyes, with a mixture of anime style and a more western flavor. The character design’s quality reaches its culmination in the Spirits’ representation. They are terrifying creatures that only partially retain their former human features, disfigured by their violent deaths and their appearance forever entwined with the legends surrounding them. Locations are detailed and suggestive. They are extremely diverse, ranging from an old Japanese manor to the dark hallways of a rundown mall, each one with a full set of creepy details.

CGs are incredibly detailed as well. Characters’ various deaths are extremely graphic and they don’t hold back in showing gruesome details, while the accompanying text expands and indulges in them even more. Although for some people this might be a turnoff, these scenes embody the vicious and cruel nature of Kakuya’s game very well. 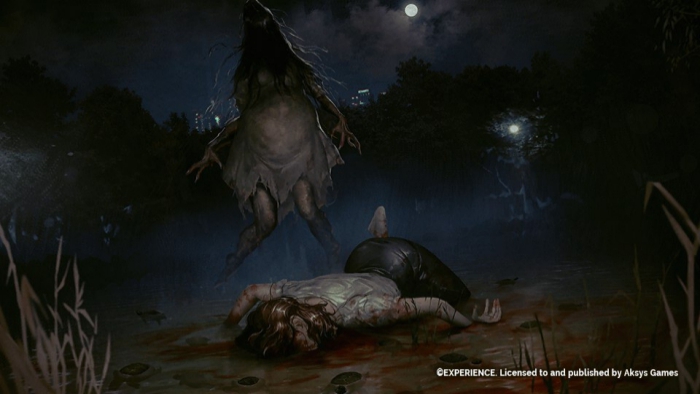 The soundtrack follows this same trend. While there aren’t many tracks and those present often repeat themselves, they still manage to represent the tension of each situation really well. Sound effects also concur to the creepy atmosphere of the game, with moans, screeches, sudden gusts of wind and so on. Each one of them triggered just at the right moment to frighten the player.

Before starting the game, it’s even possible to select the frequency of jumpscares met during the playthrough. These little events usually consist of ghosts lunging at the player while screaming and then disappearing as soon as Akira directs his flashlight towards them. They don’t add anything to the plot but are a nice addition to the already tense atmosphere of the game.

The first playthrough of NG will usually last around 15 hours. There are 3 different endings that depend on how Spirit confrontations went and which characters survived. If curiosity towards the game’s different conclusions isn’t enough, there’s also the completionist aspect that comes into play. There is, in fact, a gallery that waits only to be filled, with an astounding total of 171 images to unlock. Thanks to the skip function, subsequent playthroughs are far shorter than the first one, especially if the player-created multiple save files. The playtime required for completion will rise to around 20 hours.

Spirit Hunter: NG is an incredibly good horror game. It manages to create tension without resorting to frantic action but with text, images and sounds alone. It’s a huge improvement over the previous title both regarding its technical aspects and the overall narrative. The way the game presents itself even manages to mitigate most story flaws and engross the player into its twisted events.

A must-have for people who appreciated Death Mark and for any Japanese horror lover in general.