Nintendo recently released a new game called Splatoon. The game is a fast-paced third-person shooter, but there is a twist. Instead of firing bullets, you fire ink! In regular battles, your main objective is to cover the battlefield with most of your team’s ink color.

The game begins with the player choosing their gender and their eye colour (the hair depends on what color your team has in battles). After the small character customization, you will enter Inkopolis. This place acts as the main plaza for the game, it is filled up with other inklings (players) that own the game and you have the ability to check their miiverse profiles and their clothing as well. However, first, you will watch a newsflash featuring the squid sisters Callie and Marie. They will inform you that our precious zapfish has been stolen from Inkopolis. They will then proceed to informing you about the stages that are currently available in the online battle mode. Right after that, you can jump into the action! 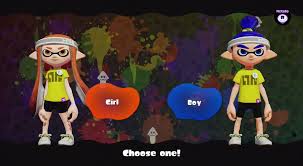 The only weapon available from the start is the splattershot, a rapid fire weapon. There are currently two battle modes available: Turf war, and Splatzones. Turf war goes under the category “regular battles”, where the main goal is to cover the map with a majority of your team`s ink. But be careful, because when members of the enemy team spots you, they will most likely try to “splat” you (the game`s word for eliminating). If you get splatted, you will get a time penalty, and respawn at your team`s base. But do not worry, if you want to get right into the action again, you can simply tap a player on your minimap from your gamepad, and you will jump to their location. Another method to quickly get to parts of the map is to enter squid form. As a squid, you can swim in your team’s ink. Swimming is much faster than walking, so be sure to use this when you have the opportunity. Diving into your ink can also be a clever way to escape enemy fire, and when your ink tank (ammunition) is empty, dive into your ink, and it will refill quickly. The matches lasts for 3 minutes, and when the battle ends, the cat Judd, will announce the winner. After level 10, you will unlock ranked battles. The only mode currently available there is splatzones. These matches are more competitive than turf wars, and they will affect your rank. Instead of inking the entire stage, you will ink one or two splatzones. The main goal is to cover the splatzones with your ink, and hold it for 100 seconds. However, if a team loses the splatzone(s), they will get a time penalty based on how low the timer count is. The first team to get to 0 (or has the least remaining seconds when the match stops), wins. 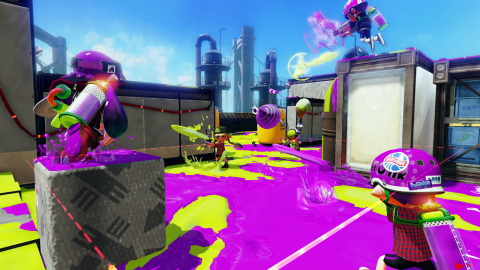 There are three different kinds of ink weapons. I already mentioned the rapid fire type, which acts as the most basic kind of weapon. It can be used both to ink the area efficient, but it also works fine as a weapon for splatting your opponents. Next, we have the roller. The roller is basically an ink roller capable of painting lots of ink in a short period of time. As you may have guessed, this weapon works best for inking the map, but if used correctly, you can also take out enemies by rolling over them, or shake off some of the ink on your enemies. The last type is the charger type. I like to see this as the opposite as the roller: It works best for taking out enemies from a distance. You fire by holding the ZR button in, aim at an enemy, and release! As you fire, a line of ink will cover the area you shot over. There are also sub-weapons and special weapons. Sub-weapons are power-ups you can use by pressing the R button. Much like main weapons, there are many different sub-weapons, and some of them are bombs, sprinklers and seekers. When you fill up your special meter, you will be able to release your special weapon. Some of the special weapons are the Killer wail, a weapon that sends out a great beam that will destroy all of the enemies in its path,  the inkstrike, a missile that can ink a lot of territory, and the bubble, a shield that will protect you from damage.  As you play online matches, you will gain experience, and you will eventually level up. As you reach higher levels, more weapons will be available, so try to find the weapon that suits you the most. 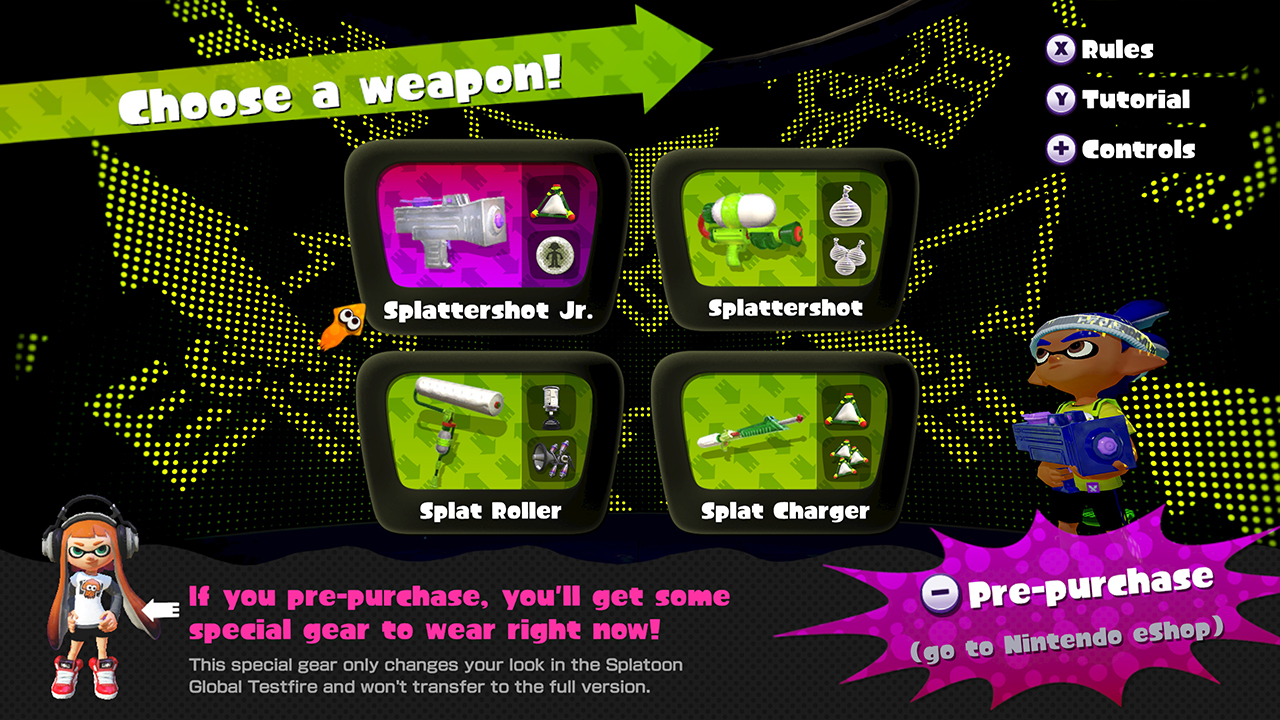 In Inkopolis, you will discover four buildings. These buildings are shops. In Splatoon, you  can buy weapons, outfits, shoes  and hats to customize your inkling character and make them look as cool as possible. These clothes do not only look cool though. Each piece of clothing comes with ability slots. The ability slots have different effects in battle, like dealing more damage, move more quickly, and so on. After you reach higher levels, you will be able to buy clothes with more slots. And if you meet a guy named Spyke, he will gladly increase the numbers of ability slots on your clothes… for a price. 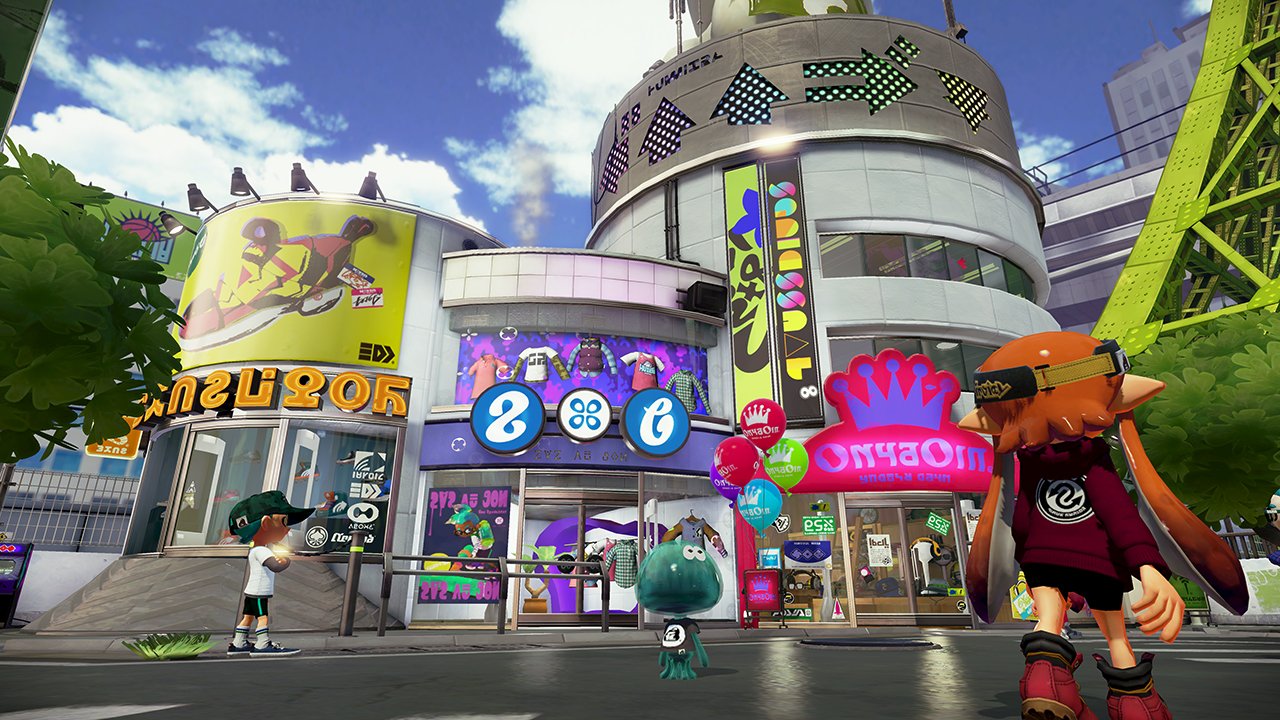 You might have seen a strange guy staring at you in Inkopolis. This guy is none other than the legendary Cap`n Cuttlefish. You may remember that I wrote about the great Zapfish`s sudden disappearance. Well, Cuttlefish has discovered that the abductors are the Octarians, the Inkling`s worst enemies. Their goal is to take over Inkopolis, and you need to stop them. Dive into a fun and action-packed single player campaign featuring 27 levels and 5 bosses. The different levels have many exciting game mechanics, and the bosses are indeed something to looks forward too. Besides the campaign, there is also a local multiplayer mode called the battle dojo. One of the players uses the gamepad screen, while the other one uses the pro controller with the TV screen,  The goal is to splat more balloons than your opponent in 5 minutes. I haven`t gotten the chance to play it because of the lack of a second player, but by the looks of it, it looks decent. 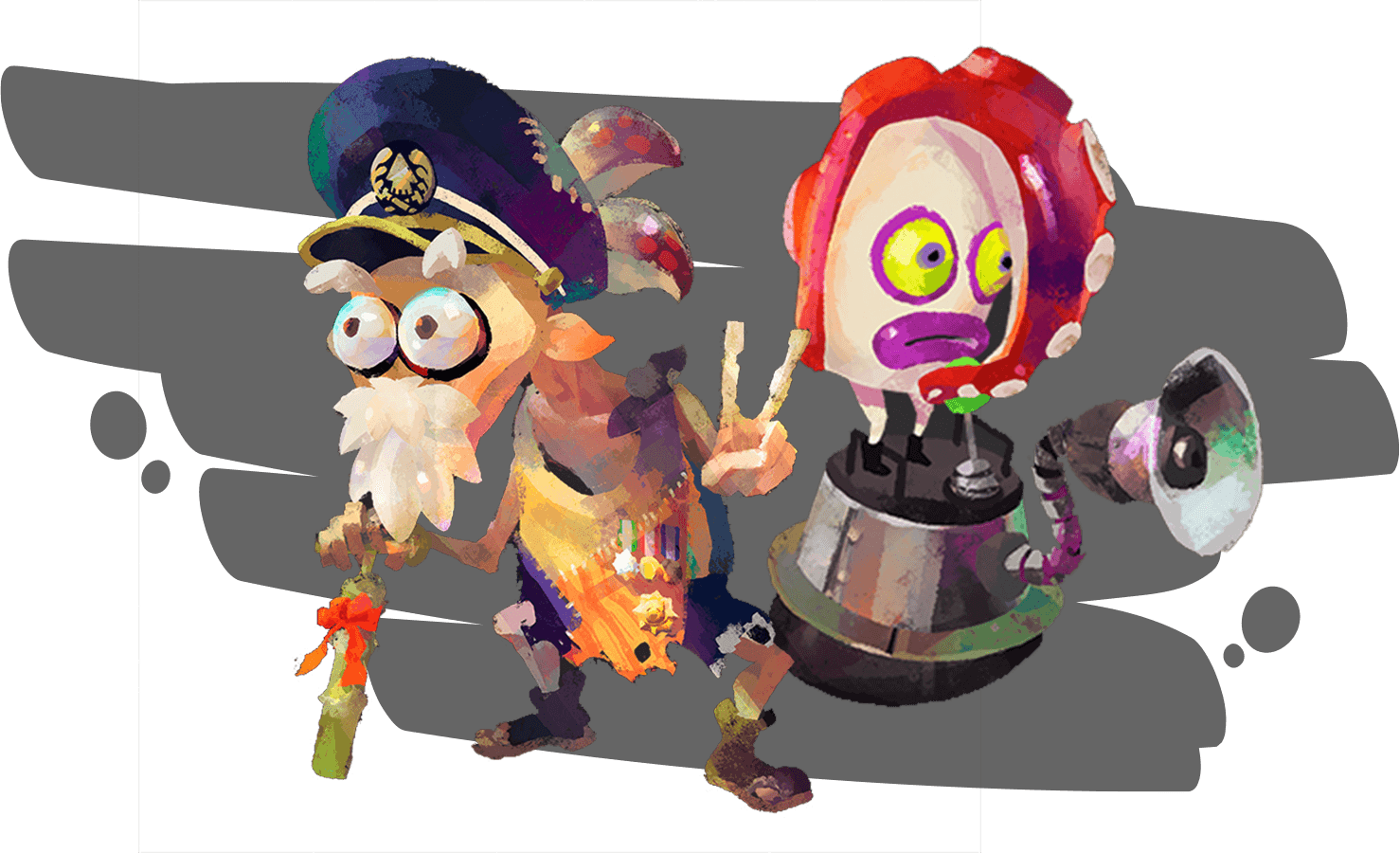 In my opinion, Splatoon is a great game that every Wii U owner should buy. The online multiplayer mode is perfect whether you are competitive or not, and the wide variation of weapon and clothes will make sure that you find something you will like. The single player campaign consists of both challenging puzzles and exciting action, Nintendo has announced that free additional content will be released in the following months, so the game will have even more content than it already has. Splatoon gets top score!

Gerudo is a big Nintendo fan, and The Legend of Zelda is his favorite franchise of all time.