Spy Chameleon, also know as The Spy Chameleon: RGB Agent on Steam, is a mix of an arcade game and a mobile one, with good reason: it works for everyone. It’s easy to learn how to play, it gets challenging but not frustrating, offers gameplay value in a mobile-like interface and plays like… a little arcade game.

In simple terms, you need to reach the exit in each level, avoiding cameras, obstacles and enemies, but it won’t be easy: the security is tough. But wait, there’s more! As a spy chameleon, you aren’t just skilled at avoiding stuff, you can also camouflage yourself with the room in order to not be spotted (four colours actually). 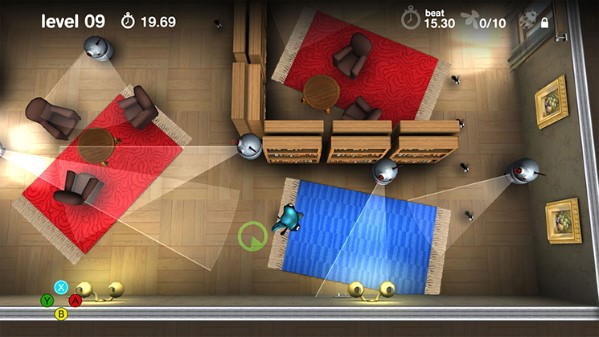 The game features a total of 75 levels divided into five worlds (or missions), where the difficulty and game’s elements change depending on each world’s theme, including enemies and interactive objects such as switches, paint buckets, color-changing platforms, moving walls and more…

The replay value is also a good aspect of the game: reaching the goal won’t be enough since each level have three achievements. The fist two are unlocked from the start: eating the ten flies and beating the level within a time limit. By beating the fly goal, the third one will be unlocked: grab all the ladybugs. If that isn’t enough for you, there’re two difficulties: normal and hard.

The controls are well done too, where you move with the L-Stick and the camera with R-Stick, and swapping colors is just pressing the A, B, X and Y buttons (the screens shows the colors). 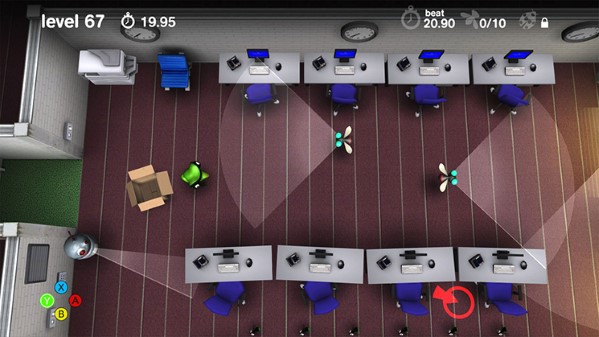 Graphically, the developers did a good job, and thought it’s not an exigent game, it looks great on the Wii U, being identical to its PC version running at a smooth 1080p 60fps. The soundtrack is also great, featuring a good variation of melodies and well-made sound effects.

Lastly, the presentation is pretty complete (the only missing aspect is the manual), where the Off-TV mode is present, each level features a leaderboard, the Pro Controller is supported, there’s a good quantity of replay value and also, a great quantity of achievements.

Conclusion:
Spy Chameleon is actually a great entry for the Wii U eShop, and considering it has the same price as the PC version, the off-TV is the only reason to consider the Nintendo console’s release… Well, maybe the power bill depending on what PC you are using.