Squids Odyssey takes place in the sea where a mysterious black ooze starts corrupting everything and it’s up to a group of squids to save their home from devastation.

Being honest, Squids Odyssey has a really generic story. Normally I would write this off as being a bad thing, but thankfully the game has a great sense of humor. The characters have their own personalities and expressions which makes for some funny dialogue and cutscenes, which is great for anyone looking for a quick laugh.

While we’re on the topic of humor, I want to bring up the hilarious level titles. Most of the levels within the game are either a reference or a pun to another game or show, including Little Big Squid (Little Big Planet), Red Squids Redemption (Red Dead Redemption), and my personal favorite, Squids Ball Z (Dragon Ball Z). This doesn’t really add anything to the game itself but it’s a nice little detail for anyone that actually understands what they’re referencing. 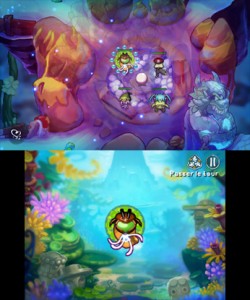 Honestly, the game feels and plays like a top-down Angry Birds. This isn’t bad or anything but it’s certainly worth noting for any of you that don’t enjoy flinging creatures all over the place to hurt other creatures.

Essentially the goal is to get from point A to point B while clearing out any obstacles or enemies in the way, and that’s fine. Each squid has a designated number around it each turn, with bubbles being a guide to how many times you can fling your squid in said turn. You can either fling it a short distance or a long distance; it’s really up to you. 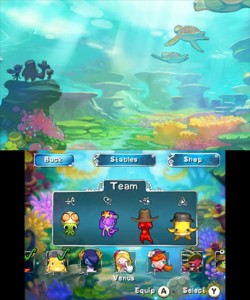 If there is one bad thing about Squids Odyssey, it’s the edges or holes that squids can fall into. Yes, they’re there for the sole purpose of making you avoid them, but at times you can fall off while being quite a bit away from them. It’s really frustrating when it happens near the end of a level especially, mostly because it could mean that you have to restart the entire level. I know this is extremely miniscule but it’s worth pointing out.

At its core, Squids Odyssey is a basic 2D Strategy RPG game. You can hold up to four squids in your party at a time (15 squids within the game total). Each squid has their own stats and have a level cap of 30, and can also wear a helmet to improve stats. This adds a great number of options between squids and helmets, so be sure to try different helmets with different squids to see what you like.

The game also features its own virtual currency (as does almost every other game ever created): pearls. Pearls can be used to buy helmets and items. Items can be used during a level to assist you, whether it be a Miracle Tentacle, which revives any squids that may have fainted; Sushi, which will increase movement distance and heal a small amount of health, or even a Pearlfish, which will double the pearls earned during battles so you can buy even more items. Once again, this really just adds more variety so I can’t complain. 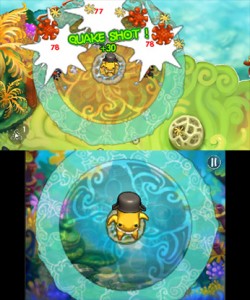 For what The Game Bakers were going for, they did a great job in terms of presentation and overall quality. The game feels like what it should be; a cute, enjoyable world full of adorable and charming sea creatures. The soundtrack fits the world great and I never once found it annoying (which rarely happens).

The game features stereoscopic 3D, which thankfully works pretty well all things considered. It doesn’t add anything to the gameplay, no, but it adds a sense of depth that you aren’t going to find on the Wii U version of the game.

Squids Odyssey has a lot of content to unlock and complete, be it the 3 stars in every level, the extensive amount of bonus levels within the game, or just unlocking squids in general; there’s a lot of stuff to keep you busy for quite a while.
Conclusion:

In short, Squids Odyssey is near perfect, and it would be without pesky holes all over the place and a rather bland story. Thankfully, the gameplay, replay value, presentation, and humor do more than make up for it. For those of you looking for a lengthy budget title to complete, you should absolutely check it out.