STORY:
Being short without spoilers: An infectious black ooze is corrupting the Squids’ world and you need to control a band of new heroes to save their underwater home. The story is presented in an interesting and humorous way, and if you’re not interested, you can easily skip the cutscenes. For this type of game, the story is well done and I like the work they made in the cutscenes.

GAMEPLAY:
Squids Odyssey is a strategy RPG with some mobile game elements, making an interesting gameplay for any type of player including casuals and hardcore gamers. It also has TRPG elements,because you will be playing by turns: you move first then the enemy moves next and the process continues in that order. In addition, the order you set for your squids is the order you will play them in the game, as you can see in the first screenshot.

You move the squids around the level by launching them like rubber bands with the L-Stick to aim the angle and how much power you will use and the button A to release, or you can do it with the tactile screen, an interesting way to play allowing you to be more precise with your movements.

You can defeat enemies by hitting them, using special abilities or by making them hit spikes, doing them damage this way. Trowing you or an enemy in a hole or an environment limit (the places where they can fall) means an instant KO. There are a lot of strategy elements and risks, and the AI of the enemies is well done, therefore you need to be careful when attacking. You can even use hippocampus to move around the level when available, however, I do not want to spoil anything.

There are different items that can be purchased in the store and saved in your inventory. With those you can rescue or revive squids, attack enemies or even win the double of pearls. 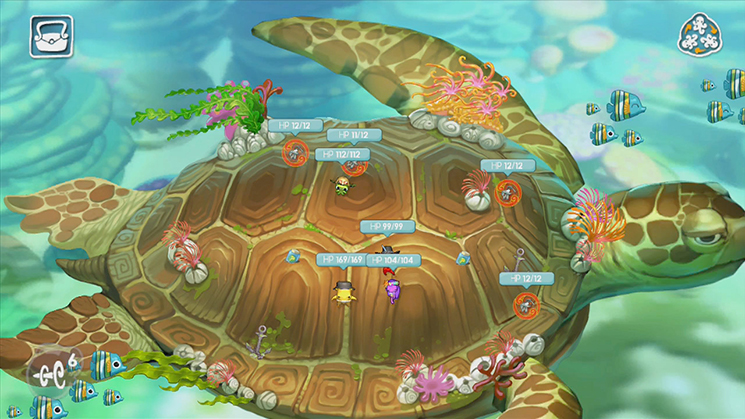 The game presents over 90 levels, with an extra mode that can be unlocked later in the game. Every level has three stars that can be earned: one can be found in the level (you need to find where it’s hidden), the second star is earned if your squids don’t die until you finish the level and the third is based on the quantity of turns you need to beat the level. You don’t need to get the three stars at the same time so you can see what strategies would be better for you.

Now, you have 15 different squids to choos (most of them will be locked when you start the game), where the only difference with the squids are their personality and their stats, so you can actually pick your favorites. There are four different classes of squids, having one special ability per class:

Scouts: When they’re in movement, you will be able to make a few short busts being able to reach longer distances (or more hits to the enemies).

Shooters: Like the name says, they are able to fire a ranged attack, being useful for example, move an enemy outside the level or kill it if it has low HP.

Troopers: They are able to do a stomp attack in their area, being able to damage and move away enemies. You can also move spikes with this move.

Healers: They will restore the health of your squids when it collides with them.

Using the button A will allow you to use the squids special ability, and the Y button can be used to pick the enemy when you’re using a shooter squid. 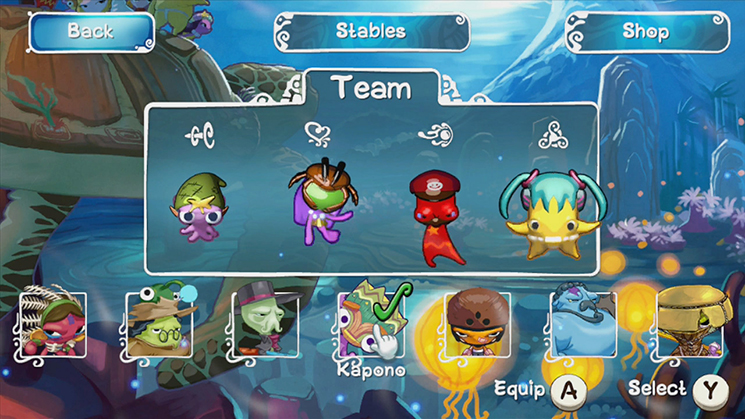 There are also some power-ups that can be found in the levels, offering different effects when consumed. For example, you can recover health, have a shield when it’s the enemy’s turn, having the ability to evade one attack, have another turn or even another turn with stronger moves.

Chests can be found too, offering pearls and hats: Pearls are the actual currency of the game, where you can use it to buy objects, leveling up your characters and buying hats. You can also win bonus pearls when you do combos or when you win the level’s stars.

The hats, for the other side, can boost your character’s stats (and you can event transfer that boost to every squid). There are different designs for each class, so you can choose the one you like the most after transferring its power.

The controls, which are pretty varied, work superb with the game, that includes using the GamePad screen or the TV. The Off-TV option works perfectly as well, however, the only bad thing about it is not being able to switch screens anytime. 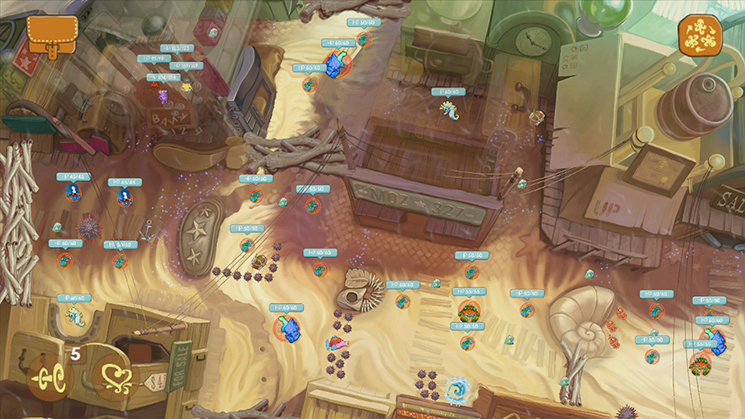 GRAPHICS & SOUND:
In first place, the game looks great on both screens, using high quality drawings for the backgrounds (some of them animated), great character drawings and detail with a cartoon style. For the character, it uses 3D-sprites animations that look good but not as great as the game’s environment.

The music isn’t behind either, featuring different songs which most are pretty cool, that mixes perfectly with the game itself. For the other side, FX sounds are also well done presenting a good variation with a great quality. 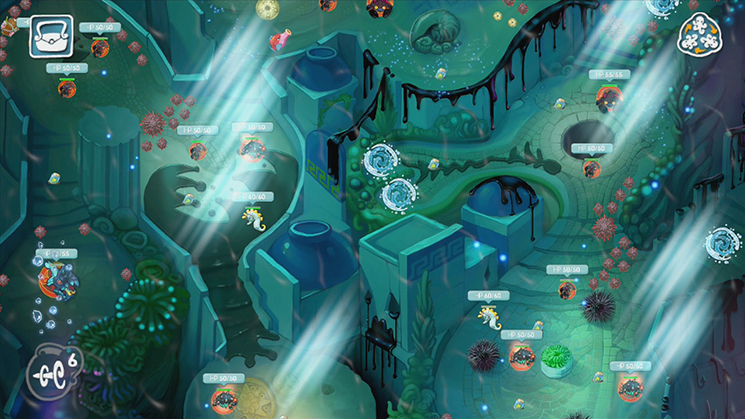 PRESENTATION:
The presentation of the game is great. You have different ways to play the game, the GamePad integration is excellent, the manual and the in-game instructions are well done, the menu and UI design are great, it has a lot of levels and replay value and the list can continue.

I can say the only problem with the game is the lack of introductions of the menu itself when you start the game, making it difficult for those who are playing the game for the first time and don’t like to read the manual.

Additional note: If you visit their website, you can find a complete guide of the game. You can access it here.

CONCLUSION:
Being honest, Squids Odyssey offers a lot of content that’s worth its price, including replay value. The presentation is excellent, and the music and graphics make a great companion for the game. I can’t find a reason not to recommend it, unless you don’t like the genre.