A little more than 17 years ago, Star Wars Jedi Knight II: Jedi Outcast was released for the first time. At the time, the game received very positive reviews and ratings. The game clearly did well upon its first release. The question is, does it hold up these days, and was it ported well over to the Nintendo Switch?

The gameplay of Jedi Outcast is mostly classified as an Action-Shooter, both first-person and third-person. There are many opportunities of platforming and puzzle-solving within the game. You can reach secret areas by jumping onto ledges and up on top of boxes in rooms. There are many areas that are locked from one direction, but can eventually be unlocked and opened from another pathway, to allow for easier access to areas in the game.

Jedi Outcast can last between 12 to 14 hours for the main story mode. Throughout this story, you play as Kyle Katarn, a former Jedi, now cut off from the force. Though, many events come into play which allows you to see the character of Kyle develop during his adventure. You can unlock force abilities and different weapons which you can use as you prefer. The timeline of the game takes place almost 10 years after Return of the Jedi. 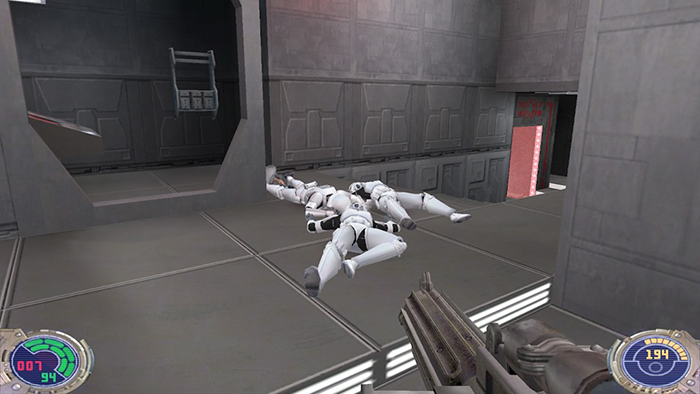 Jedi Outcast holds itself at a challenging pace, but not so challenging as to ruin itself. There are four levels of difficulty when starting a new game. They are Padawan, Jedi, Jedi Knight, and Jedi Master. Each difficulty getting gradually harder and harder.

It is almost certain there will be a few deaths during gameplay on the ‘normal’ difficulty, which in this case would be either Jedi. Some may classify it as Jedi Knight being the normal difficulty. 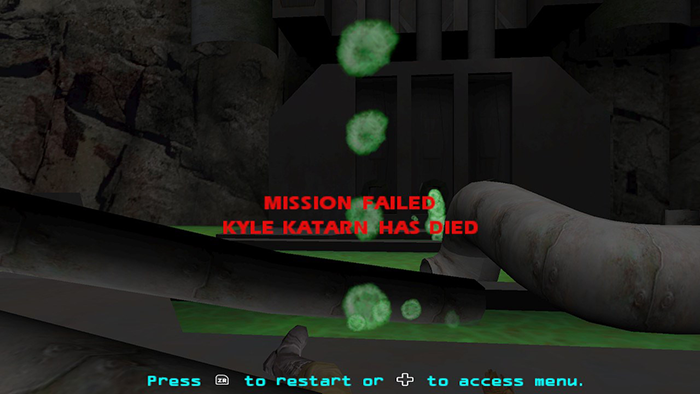 Upon first look, the game’s graphics are clearly dated, as it was not remastered or rescaled in high definition at all. Though, the big problem came from how tedious the first few hours were. When playing with a controller, it was found to be very sensitive when aiming and moving. As this game has a decent mix of combat and platforming/puzzle-solving, both these issues truly affected how the game played. There is gyro-control aiming, which makes it a bit easier, but it still is very sensitive. 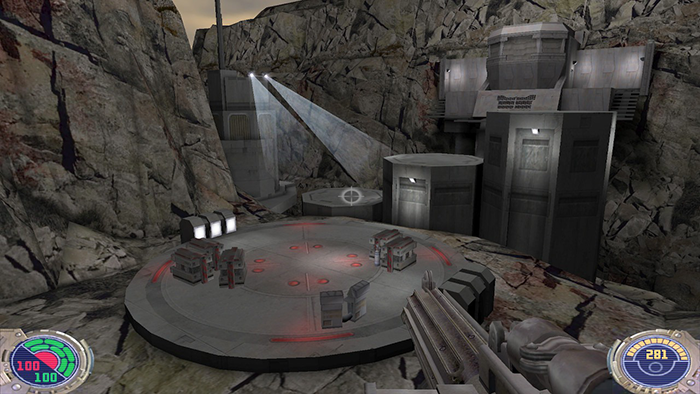 In terms of enemies, you often see stormtrooper after stormtrooper, and officer after officer, that you defeat over and over again. Since this game is more focused around being a shooter, and not an in-depth story-telling game, it is mostly fine that the enemies are repetitive. Especially since most of the time you are infiltrating some Imperial base or outpost. 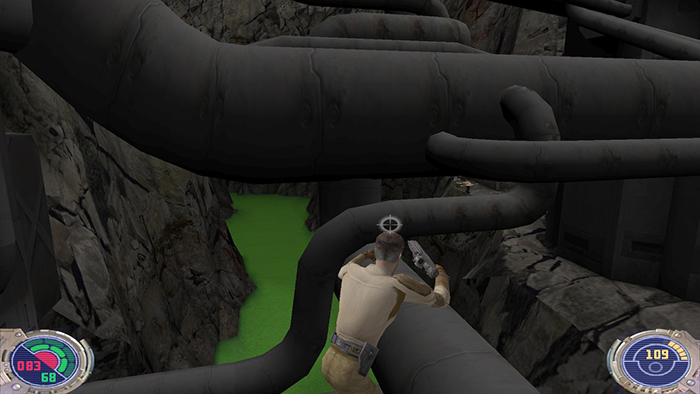 Once you receive more melee-based weapons, such as a lightsaber, the game is a bit easier to control. Abilities such as throwing your saber, blocking with it, and deflecting are very useful. You can also switch between first-person and third-person quite easily with the touch of a button. This allows for easy transition between when you need to platform or jump across gaps, and when you need to shoot your weapon from behind some cover.

A lot of the areas in the game are quite detailed. Many hallways and directions you can take allow for you to become quite immersed while playing it. However, some areas such as the outside areas appear a bit rushed and non-detailed. For example, the second level of the game has you first going through some mountains. The terrain of these mountains feels like they just put some walls up to ensure you took the right path, but did not really care about the detail of the pathway. Not adding anything along the way, or fun secrets outdoors. 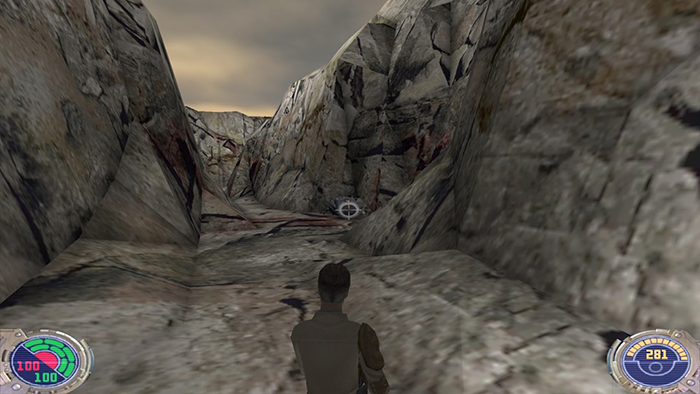 The game does have a few bugs on the ported version. For example, one that was encountered was after clicking on an item or supply cache to retrieve ammo/shield/etc., if you then pause the game in the middle of the supply cache sound effect playing, the effect loops endlessly.

The soundtrack of the game is quite good. As expected from the orchestral songs within the Star Wars franchise. The game includes both original instrumentals, unique to the game, and well-known Star Wars themes. The soundtrack truly does give the impression of an intense ‘in the midst of combat’ circumstance. Every time an enemy spots you, and a firefight begins, the music feels just right.

Star Wars Jedi Knight II: Jedi Outcast on the Nintendo Switch can be a great time-passer with its long levels, multiple abilities, and engaging story. While it doesn’t look or sound the best with this ported version of the original game, it still does show itself as one of the many great Star Wars video game classics.