Remember the SteamWorld: Tower Defense from Nintendo DSi? Well, I sure do and to be honest, I didn’t like it. Why? because I’m not a big fan of Tower Defense games at all. However the Swedish developers, Image & Form have released a sequel to the original SteamWorld game which is not actually a direct sequel instead a whole new game with completely different gameplay called SteamWorld Dig.

SteamWorld Dig is a mash-up of different games, it’s part platformer, part RPG and part puzzle but All fun-filled highly immersive game. You are a lonely robot miner named Rusty who’s come to a little town to claim his uncle’s mine. All Rusty has in the beginning is a pickaxe which comes in handy while digging. You will find a lot of treasures, minerals, and even strong enemies along your digging journey. You can then sell your findings in order to upgrade your character and its weapons. You can buy other tools and also upgrade your robot, after all machines need an upgrade every now and then.

The game is not all easy because there will be times when you get stuck, like permanently stuck and your only choice would be to use the Self Destruct option. This is where the worst part comes in, when you die you lose 50% of all the money you have to renew your broken body. It doesn’t seem much in the beginning when you have small amount of money but it will definitely shock you when you’re much farther in the game with  lot of money. Just don’t die. 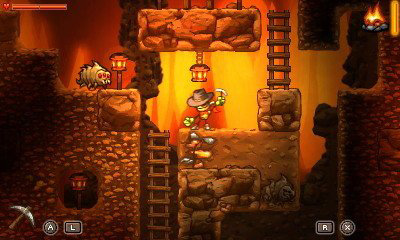 When it comes to visuals, SteamWorld Dig is one of the best game I’ve played so far on my 3DS (which isn’t a lot). It offers great graphics for a small budget game, everything from the world, towns, mines, enemies and all the robots look simply awesome.

The sound and background music is also pretty decent but once you’re into the game for an hour, the music might start getting a little bit annoying or maybe, that’s just me. I like the dark theme of the music though but for an hour straight, it started getting on my nerves, not a downside at all though, it’s probably just me. It doesn’t take away anything from the gameplay either.

Finally, even though SteamWorld Dig is a sweet and short game but the developers have worked hard to give you all the fun and entertainment in the few hours of gameplay. You’ll enjoy each second of it. Once I started playing it, it was pretty hard for me to put my 3DS down, however, I had to do it, the review wasn’t going to write itself.