Image & Form just announced their new game SteamWorld Heist, being the third title in the SteamWorld series. Meanwhile the price, date or even the platform wasn’t released yet, it’s aimed to be released on Spring 2015, and it’s likely it will reach the Nintendo’s consoles, the 3DS at least.

In SteamWorld Heist you won’t digging again, because it’s an survival / space adventure game. Recuiting teams of ragtag robots to explore the remains of a destroyed robot and board enemy ships will be part of the experience, where in the last you will command your crew in a turn-based combat style. 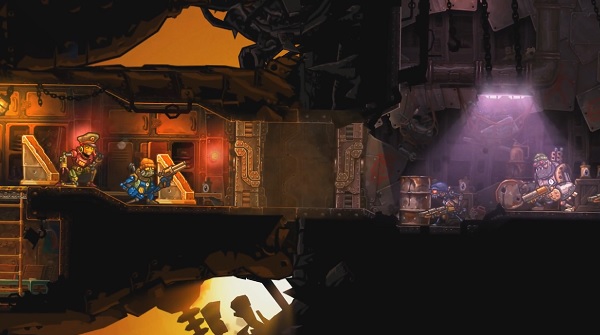 It will take place some time after SteamWorld Dig, where a cataclysmic event shattered the planed forcing its population to live on steam-driven spaceships (Rusty dug too much?). The water, a needed element for robots to remain in operation, is lacking as well, and bad guy will try to heisting other ships and bases.

“Heist isn’t a sequel to SteamWorld Dig, It’s set in the same world and the cowbots are still the heroes. But a lot has happened to SteamWorld since then, and we want to make a game that is radically different. Partly because we really wanted to make a turn-based strategy game, but also because it felt like a clever move. The obvious follow-up would’ve been Dig 2; we wanted to surprise instead.”

You can see the teaser below, still don’t expect to see a lot: