SEGA is doing their 3D remakes of Genesis / MegaDrive games, but they aren’t the only ones because Mebius brought us Steel Empire, a 3D remake of the game that was released for the 16-bit console and Game Boy Advance. Thanks to Teyon who did the localization of the title, Steel Empire is making its way to the North America region, but is it worth its retail price? 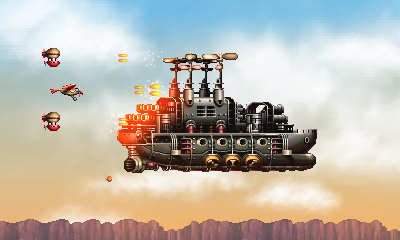 Steel Empire has a total of seven stages, containing two different bosses each, where every stage lasts between five to ten minutes besides the last two levels which takes up a little more time. Still, this duration depends on the skills and difficulty chosen. There are also four different difficulties (the last one unlocked later) offering a different experience with each difficulty, adding replay value.

Between every stage, you’re able to play as any of two different vehicles:

During the levels, you will see different items that can be used (the container must still be destroyed first): 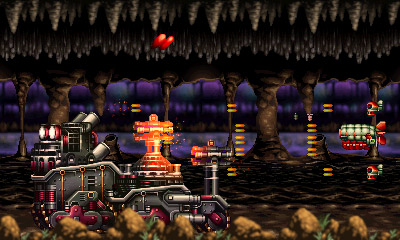 After finishing the level, you will get the extra points based on the lives you used, the Bonus items you picked and how many Bombs are left, still there’s an interesting feature: a replay option. With a maximum of 60 replay saves, you’re able to save the entire stage play. Meanwhile it isn’t a big feature, it’s is a great addition if you want to learn the level or record it with a camera to share.

After finishing the story mode, there are two more elements that add replay value to the game: a local leadboard that keeps a full detailed score including ships used, hits received (a total of 99 actually) and other elements, adding the arcade element to the game. Still, the lack of an online leadboard is a missed opportunity.

The other element is the achievements, being a total of 20 and completing all of them unlocks a picture, and completing most of them, the access to the gallery.

The controls of the game are pretty simple, you move with the Control Pad or the Circle Pad, shot to the left pressing Y button and to the right with A button, use the ‘The Thunder’ with B button and pause with START button.

Steel Empire also contains a quantity of options, affecting the gameplay, including: 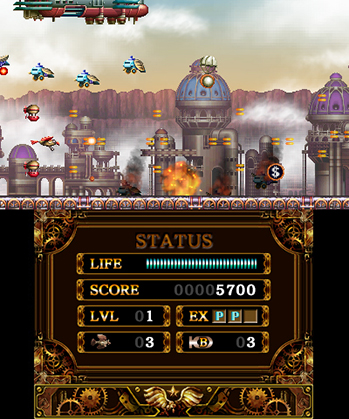 GRAPHICS AND SOUND:
Steel Empire presents wonderful retro (but remade) graphics with a steam puck design that makes me remember games from SNES, featuring a classic menu interface that makes you feel really old. The explosion effects are really impressive!

The 3D effect is flawless, being greatly done to the game. Meanwhile it looks really cool in the menus and story explanation, it doesn’t make such a difference when playing.

The soundtrack of the game is pretty good but repetitive (this is obvious considering how old the game is). Still, the remastered work offers a great quality in overall, but for some reason there are times that sound like a midi melody instead. The sound effects are limited but also feature a great quality.

PRESENTATION:
Steel Empire actually presents a flawless presentation that can even be better that some retail games, featuring a really cool looking interface (also user-friendly), a good manual, lots of options, replay value, etc. (I would repeat elements I already mentioned).

The only thing wished for in the game is the online leadboard, or maybe a little voice acting, but that’s all.

CONCLUSION:
Amazing gameplay, great replay value, excellent remastering work and a premium presentation is the best way to define Steel Empire, where I can easily recommend it to any fan of the genre. Still, the price can be quite heavy, so if you see it on sale, it’s a must have.