The second-last mission in Chapter 6 of Stella Glow has your characters trying to escape from the ruined city of Fahrenheit but being trapped underground by the Harbingers. It’s definitely one of the trickiest missions in the game and took me several tries to get through, because Dorothy’s Dekurins were relentless and always ripped through my team quickly to get to Alto. It’s a matter of playing defence and cutting down enemies one by one. 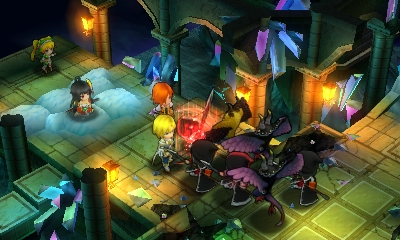 Best units for this battle: Alto (required), Rusty, Archibald, Ewan, Mordimort. You can pick any sixth unit you like – I recommend Sakuya.

At the start of your mission, your characters will be in the centre of the map. Hilda and Dante will be north of you with Hilda’s One-Eye familiars. Hrodulf will be to your east with Harbinger Cadres, and Dorothy will be to your west with her Dekurins. There’ll be a set of stairs leading down to two treasure chests near Dorothy’s part of the map.

Dorothy’s Dekurins Mark II have the extremely annoying ‘Guts’ ability, which lets them cling to life with 1 HP even when you inflict a fatal blow on them – this gives them another chance to attack, which they’ll almost always avail. Add in the fact that having low HP increases their ATK and rate of critical hits, and they’re quite formidable.

Move Rusty towards the stairs at the start of the battle. Use Knife Throw on the Dekurins, although it won’t damage them that much. The familiars will head for your team immediately. Cast Butterfly Dream using Mordimort on the tile indicated below to hold them off for a while. 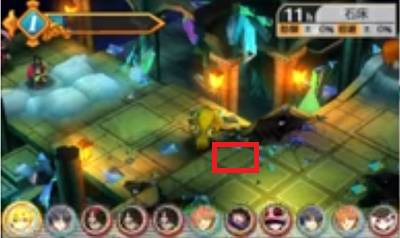 Have Archibald cover the adjacent tile to keep the One-Eyes from getting through while you have the rest of your team head down the stairs. Use Archibalds ‘Brothers-in-Arms’ ability on adjacent allies during his turns to raise their DEF. Use Mordimort’s ‘Butterfly Dream’ ability one more time near the stairs and, in her next turn, her ‘The Night Passes,’ song on the Dekurins as she goes – it’ll render them blind for a while so their attacks are almost guaranteed to miss.  Eventually you should have your team arranged on the stairs like this:

This way, you’ll be able to attack enemies that come for you using at least four units: Archibald, Rusty, Mordimort and Ewan. Have Alto attack the treasure chests to open them. It’s likely that you’ll have to use HP and SP-recovering items on Archibald. Don’t hesitate to do so. You’ll probably level Archibald up one or two times as well, which will always come as a lucky break. Dorothy and Hilda can summon more Dekurins and familiars, but stick to your arrangement – use Archibald’s ‘Weak Grosso’ on enemies, then have Rusty and Ewan finish them off with diagonal attacks and ‘Sharpshoot’ respectively.

Once you clear the mission, you’ll have a relatively easy boss battle as the last battle of the chapter. A certain character will come to help you during it.