A game without so much style…
This game offers what it says, but with a really short experience, it feels more like a flash game than an eShop title.

The gameplay itself is simple and solid, however, it’s short. Every part of the game is controlled with the stylus. The controls are well made and I have to say that I didn’t have any problems when playing with it.

There are 13 different tools in the game, some of them have the same use but in a different way. You can cut, color, curl, wash, make the hair grow and use accessories for example. The result depends of your imagination and skills to play it. 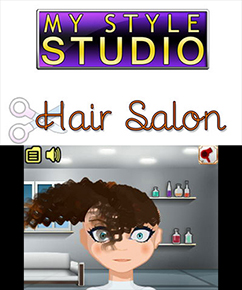 The sound part of the game is kind of lacking, being the main reason you only have one song for the entire game. At least it has a mute button so you can listen to your own music while playing.

The FX sounds used in the game have good quality and a little variety, but nothing more.

The game’s graphics are simple but well done with some animation in the faces of the people and good quality drawing. Sadly, the hair position when you’re playing isn’t perfect when you’re using some tools, but it isn’t a problem at all.

Of course, how the game only uses the tactile screen to play, there is no 3D effect, but this isn’t a bad thing because existing or not, it won’t be used.

A good thing to add is you can export your hair design as an image to your SD card so that you can share it or just watch it on the Nintendo 3DS Camera. 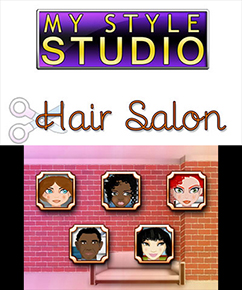 The presentation of the title in general is really poor because you enter the game, you select one of the five characters and start playing without any explanation of how to play.

Also, not that important, but when you export the design as a image, the in-game graphics such as the mute buttons are showed as well.

The game feels like a flash game that is available to play for free but without the ads and price tag.

VERDICT: 40/100 (Mediocre)
The game isn’t that bad, but it’s lack of content and presentation with a high price tag doesn’t help it at all. Of course, I recommend this game to girls under the age of 8 years old or when there’s a discount. With more content and features, this can be a better game.