There is a high chance that you’ve come across the Super Monkey Ball franchise if you’re a SEGA fan. Either by playing the main games or seeing references in another title, you have probably seen this iconic monkey multiple times. The series seems to be pretty dear to Nintendo’s former rivals. Super Monkey Ball: Banana Blitz HD is the porting and polishing of the homonym game released on Wii in 2006.

The peaceful life of AiAi and his gang is once again on the line. The evil space pirate Captain Crabuchin has stolen all of their bananas, and it’s up to our protagonists to get them back! If you’re here for an interesting plot, well, this is the wrong game for you. Except for the introductory cutscene and a brief conclusion, in fact, the game doesn’t offer any story at all. 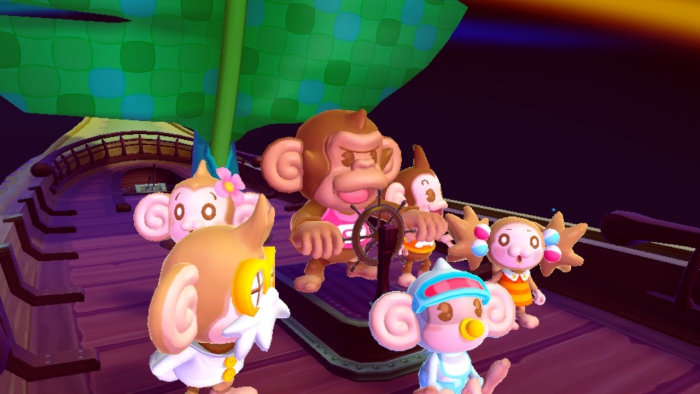 It’s disappointing, since the previous entries in the series managed to set up an interesting and cute world. It was always on the simplistic side without a doubt, but at least it gave some context to our actions.

The game is a stage-based 3D platformer with a simple scope: to reach the end goal in every level while picking up as many bananas as possible without falling off-screen. True to its arcade origins, the game gives the player three starting lives, which can be increased by one for every twenty bananas they collect. Luckily, there’s no game over: when you terminate all lives, a Continue prompt will appear and you won’t lose any in-game progress.

Since the original game relied on motion control, it was necessary for the multi-platform porting to adapt to a traditional controller. The resulting optimization retains the simple gameplay: the player can only move the character around and jump. There isn’t a proper way to control the camera but it regulates itself. It’s possible to change its sensibility, but it can only be done from the main menu. Therefore, it’s a bit frustrating to test which camera type is the best for each level.

Controlling the monkeys isn’t a flawless experience, as the ball doesn’t always move in an expected way. Surely, we’re controlling a rolling ball, so one shouldn’t expect a great amount of precision, but instead of adding flavor and originality to the experience, it feels too casual and frustrating a majority of the time. It’s also a shame that the Switch version doesn’t offer the original motion controls.

Other than the undisputed protagonist of the series, AiAi, the player can choose between 6 other characters: MeeMee, Baby, GonGon, YanYan, and Doctor, plus an unlockable that won’t be spoiled here. Each character comes with their own distinct characteristics. For example, Baby is fast and tiny, therefore he can pass through specific obstacles, but at the same time is difficult to control. Gongon is slow and big, and ideal for levels that require more precise maneuvers.

Each character will then be particularly useful for specific levels. Part of the fun consists of finding new ways of tackling a level with your favorite character, after all. By progressing through the game, the player will also unlock alternative costumes for each character. They won’t do anything other than alter their appearance, but they are a nice addition nonetheless.

Levels are short and compact. The monkeys will jump between obstacles, avoid enemies, ride along narrow rails, and perform many more acrobatic actions. They come with a time limit of two minutes at most, but this rarely represents an inconvenience, since there’s plenty of time to finish them. A handy View Stage option is available all the time; the game will display a full rendition of the level, freely rotatable and zoomable. While the view is a bit cramped in Portable mode, it still gets the job done.

Stages are designed in such a way that encourages experimentation and toying with the game’s physics to get around most obstacles. Will you follow the intended course all the way, or master a leap of faith to end the level in five seconds? Most levels aren’t excessively complicated, and they can be bested in a few tries, however, those that are difficult are a rare exercise of frustration. Even the unresponsive camera contributes to artificially inflating the difficulty.

There will be a boss to defeat at the end of each world. Boss battles in this game follow a recurrent pattern: the player has to hit a specific weak spot to damage the monster, all while avoiding its attempts of throwing the monkey off the stage.

There isn’t a great variety in the way bosses are fought. The only one that does seem to stray from this trite style is the one in the fourth world, where we’ll have to move along the back of a giant, mechanical dinosaur to reach the head, avoiding the missiles and monsters it throws at us. That said, boss battles aren’t particularly difficult and the real threat is only the time limit, which might feel a bit tight on this occasion.

A thing that characterized the original version of Banana Blitz was the astounding quantity of minigames. With 50 different activities to partake in, the game was surely packed with content. For the HD remake, the developers went for a lighter approach by only having 10 minigames survive the porting, chosen among fan favorites and easier to adapt to the new control scheme.

The minigames are a nice diversion from the main game and play differently enough. There are the pocket shmup, the whack-a-mole, the snowboarding race and many more. Up to four players can join in locally, so expect some multiplayer fun. Too bad that, when played alone, they aren’t particularly compelling, and they overstay their welcome fast. Some come in different difficulty levels, but there isn’t any substantial variation in style or gameplay.

The game is challenging, but has a good progression curve. The initial worlds prepare the player pretty well to overcome what’s to come. Some levels present a higher difficulty spike and the fact that they have to be beaten to allow progress isn’t particularly helpful, but they’re still too few and far in between to ruin the whole experience.

For the most daring players, there’s the Champion Course. Instead of ramping up the game’s difficulty by altering existing levels, the game offers this challenge, immediate to explain but extremely hard to pull off. Can you beat a world without using any Continue? While for the first part of the game this is pretty feasible, it becomes more difficult to accomplish. A misjudged jump can jeopardize the whole Course, forcing the player to restart that world. In the original game, getting every Champion Medal was mandatory for unlocking two extra worlds. Luckily, this restriction has been removed, therefore there is no reason to attempt it if not for completionism.

The game falls short when it comes to replayability, as it can be completed in a handful of hours, half of which consists of replaying the most difficult levels repeatedly. That said, to invoke replayability, the game has two special modes: Time Attack and Decathlon. In Time Attack mode, the player will get through a set number of levels to score the fastest time, while Decathlon will make them go through all minigames in a row in an attempt to achieve a high score. Both options offer an online ranking and a friend ranking leaderboard to compare the obtained results. While this is a great feature for speedrunners, the possibility of playing directly against opponents online would have been far more engaging.

As the title implies, the game is an overhaul of the original in high definition. If the gameplay falls short, the same cannot be said about the game’s visual presentation. Bright colors and a cartoony design for both the characters and the enemies make this game a joy for the eyes. The improvement over the original is evident, and graphics are crispy and neat, even on portable mode.

The soundtrack isn’t particularly outstanding and most of the time falls in the background. This new version is also different from the original and it’s a shame that there is no option to change between the two.

Albeit not the best game in the series, Super Monkey Ball: Banana Blitz HD holds its own as a platformer with 100 levels of bouncy action to get through and a great visual presentation. It’s possible to pass over its most frustrating moments and get a few hours of fun out of it.