This opus is different in the sense where it’s on a handheld, and in the sense where it has the largest character roster of the whole franchise (of course, I won’t spoil the hidden characters and the number of playable characters). In addition to this, the fact that you can finally use the Mii(s) you’ve created and play as them. There are three different movesets for the Miis, being the Mii Brawler, specialized in physical attacks, the Mii Gunner, using a gun, and the Mii Swordfighter, who has a sword. 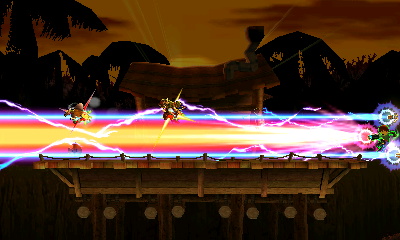 The Mii Gunner also has a powerful Final Smash.

We can also note the presence of a customization mode, where we can select which Special Attacks (also called B Attacks) a character will use, if it’s a Mii, we can also change its appearance, and more than all, change the stat in which the Mii will specialize in: Attack, Speed, or Defense. Of course, in order to balance the game, having one will decrease another stat.

Now, let’s go to the game modes. We have Smash Run, the good old Training mode, Multi-Man Smash, All-Star, and much more. There is really a lot of choices and we can even play some of these modes with a friend who has a copy of the game (locally, of course). 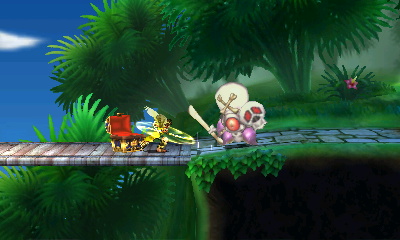 In Smash Run, you attack enemies from various games in order to get bonuses that increases your character’s statistics.

For the trophies, we also get new things: First, you can buy trophies from a shop using the money you’ve collected in the game, or by using your 3DS’ Play Coins. Second, there’s a new feature called Trophy Rush, where (using your coins once again), you get a set time where you must collect as many trophies as possible, each being added to your personal collection, so you can show it to your friends.

To add a bit more fun, the challenges from Brawl, where you would unlock content by meeting specific conditions, are back. And there’s even more of them, for your own fun!

When it comes to graphics and music, it’s also shocking in a positive way. The graphics are excellent for a 3DS game, they are smooth, it’s pleasing to the eye, and yet the 3DS doesn’t, or rarely has lag. We do also have a lot of music, even more than I expected. There are remixes or popular Nintendo themes, soundtracks coming from Super Smash Bros. Melee and Brawl, and much more.

Now, the stages. We now have two kind of stages: the regular stages, and the Ω (omega) stages. While the regular stages are typically stages as they are, with hazards and all, the Ω versions of the stages are like Final Destination, but with the hazards removed, and thus, they’re more suitable for balanced tournaments, and they’re also used in “For Glory” mode when you’re playing online. 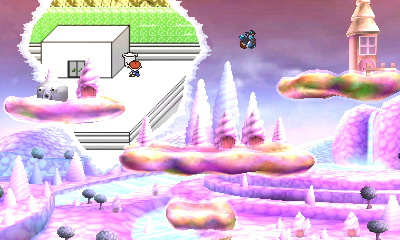 Some of the stages also feature references to old Nintendo games, like here, where we can see Ninten from Mother 1 (NES, Japan-only, prequel to EarthBound)

Talking about online, Super Smash Bros for 3DS has two modes: “For Fun”, where you fight up to 4 players around the world, with items and regular versions of the stages, and “For Glory”, where you have the choice of battling with 3 other players, or go 1-on-1 or even team up with somebody for a 2-on-2 match, with items banned, and Ω versions of the stages. While in “For Fun”, only your victories are recorded, in “For Glory”, both of you victories and your losses are recorded.

Of course, if you’re planning on going outside, be sure to activate and configure StreetSmash. Basically, it’s a mode where you have a token, and by walking near people who have the game and a 3DS, there will be even more tokens on your screen, and if you push them off the stage, you earn coins, and trophies. In other words, it’s a nice feature.

Conclusion: This game is a must-own. This version of Smash for the 3DS is just excellent. Lots of characters, stages, modes to choose between, a customization mode, and much more in one game. And of course, excellent graphics and music too. Literally, you can’t ask for anything more because of how much content there is in this game. If you ever get bored, there is an online mode that will keep you on your toes.