Swaps and Traps is said to be a challenging puzzle platformer, where getting lost in a single screen is the main draw. You can find out just how challenging this game is in our review and if it’s worth getting.

This game is a challenge: you need to be precise with your movements. The controls themselves are not difficult. You simply move your character who is named Mike with the analog stick and jump with the A button to get through a level which takes up the screen and you must get to the villain, named Divider, at the end of each level in order to clear. This must be done while collecting a few keys and avoiding still and moving obstacles. 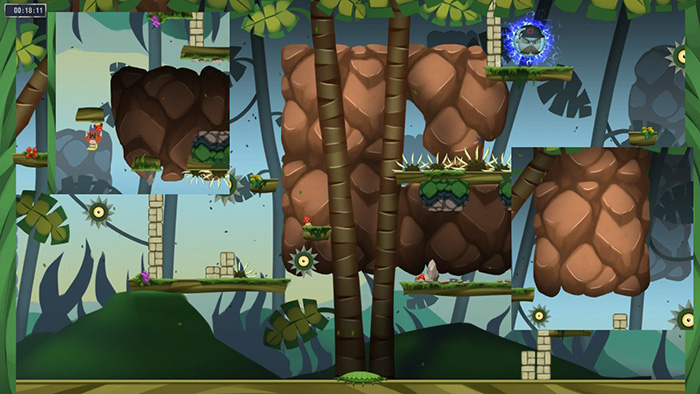 The main mechanic comes in once you pick up a key. Sections of the screen will either swap or flip directions or even both. This makes it more difficult to see the path you are supposed to go through. If you enter one of these sections, Mike will continue to be aligned with the level itself so you don’t need to worry about that. When this happens, it can become confusing on where you are, however, you can press B at any point to pull up a picture of what the level previously looked like before sections of the screen were altered. This allows you to keep a mental note on where to go if you can’t exactly tell due to the screen being altered in some way. There are 3 worlds in this game that each have their own theme and new obstacles to change the gameplay.

The music, voice acting, and sound effects in this game aren’t that notable. There is a music track per world that loops throughout each level in that world. There are a few cutscenes in this game that will sometimes play after a level is cleared where the characters will talk to each other fully voice acted which is nice. However, that’s where it stops being pleasant because in every level the characters talk, the villain (Divider) feels the need to comment every single time you slip up (which will be often since the game is a difficult platformer) and he will also give a remark every time a key is collected in the level, randomly throughout while you are playing, making noises such as sneezing, yawning, or sniffling, and at the end of the level once you get to him. Mike isn’t clear from this either. He will also start talking to the player to get their attention to keep playing if he stops moving him. This happens in as little as 10 seconds of the player not keeping him active, even if you’re just trying to think of what your next move should be. Unfortunately, that caused me to turn the volume off after the first world of trying to let it grow on me.

Does the game have replay value?

Swaps and Traps is a single-player game. The majority of its content is found in each world’s main levels. However, there are a few extra levels that can be unlocked after clearing a world. Other than that, you can aim for a higher rank and fastest level finishing time. Its online leaderboard may convince you to keep trying the game’s levels to have your name show up on the list of who did the best. 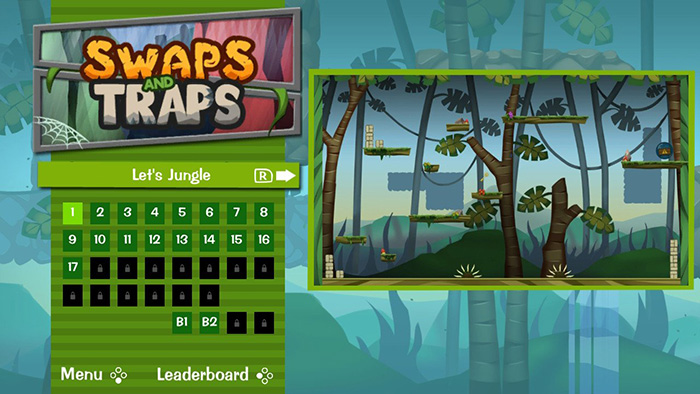 There is no difficulty setting so you can’t replay levels with a harder difficulty.

The game’s main gimmick which is its screen switching, while neat in concept and even cool to see and play through and experience early on in the game, also feels like a hindrance while playing. Often all it does is become an inconvenience and obstructs what you’re supposed to do a bit too much. When you come into contact which a section of the screen that has been shifted, skill turns into luck as you have to try and guess where the obstacles are since you can’t tell all that well and just hope you don’t touch an obstacle because you will have to start the level over again even if it feels like it wasn’t your fault but the game’s for being confusing to tell where everything is. As mentioned before, you can press the B button to pull up a picture of what the level looked like before the portions of the screen were altered which is where the obstacles are, but that’s all it is, a still image, and that does not help that much when almost all of the time the obstacles are constantly moving throughout the level and not just idle as the picture shows. So while that feature seems really cool and does make you get lost on a single screen, it feels like it could have been implemented a lot better since it not only makes you feel lost, it also makes you feel like you have to rely on lucky jumps and where you move and land to get through the level, which I feel doesn’t mix well with this game being a difficult platformer.

Swaps and Traps for the Nintendo Switch is only $8.99 on the eShop and while you can get your value’s worth, it may be forced if you do not enjoy the main gimmick of the game, but if you can understand and tell what’s going on then this game should be a good challenge for a player looking for one in this genre.