Recently, I received the system update Version 6.0.0.12E. Depending how ahead or back Australia is with the rest of the 3DS users, this may or may not be news, however, if you haven’t had an update in some months it will not hurt to check your system for updates. This update is necessary in order to get the Mii Plaza upgrade.

To update StreetPass Mii Plaza, just open the application. It will trigger a screen message that will request your approval for the update. Before you run the update, I must, however, alert you that there are currently problems with the Mii Plaza application. It freezes at some points – for example, the shop might forced closed when trying to access it. I would recommend you to wait until Nintendo releases a new update or a hot fix.

UPDATE: A new fixed version of the upgrade has been released, so if you haven’t downloaded the upgrade yet, you don’t have to worry about freezing anymore.

I can still tell you what the update will bring to your Plaza:

Now we’re in the Base screen, where you can see the menu icons surrounding your Mii and your recent Miis behind you. In essence, they look just the same, however, new icons were added. 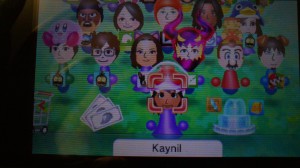 The Menu Play has gotten a revamp. If you press it, instead of giving you the options in arrows like before, it will display them visually by having your Mii walking around. You will see your Plaza Miis happily enjoying the outdoors of your Plaza as you stroll in circle around the game options for Puzzle Swaps, StreetPass Quests and… four rabbit holes with a Rabbit each, and each will pop out as you pass around them – they are simply placeholders for the aforementioned four purchasable games.

About the New Games

First of all, I want to outright say it bugs me that they are actually charging real money and not Play Coins for the new game, according to what I read on Joystiq. If you want to get the newest accessories you will be required to pay a few bucks. Of course, I am trusting that since they decided to charge, it is going to be an optimal trade in exchange of many more hours of entertaining. They will work just like the other games by walking around gathering StreetPass you will slowly progress in them. It is completely up to you which games to buy and in which order.

There is a combo pack with the four games available, however, you will hear nothing about it unless you try to buy one of the games for first time. For Australians, each game costs $6.50 AUD. The combo pack gives you the four for 19.50 AUD. This is basically a “buy 3 get 1 free” kind of saving.

These are the new four purchasable games:

I got a new piece for a new Panel, surprisingly enough it was not for a 3DS game. I took my 3DS up for a walk and I got a few new pieces but people had other panels I didn’t have so I can confirm you that at least there are three new panels:

Stay tuned and I’ll let you know as soon as we get the freeze issue fixed.