Sanuk Games has announced a Phrasebook application for the Nintendo 3DS on the European 3DS Eshop on November 27 2014.

Talking Phrasebook 7 will be priced at €4.99/£4.49. There are 780 expressions in 53 categories for English, French, German, Italian, Spanish, Portuguese, and Dutch.

“Translate from any language to any other among English, French, German, Italian, Portuguese, Spanish and Dutch. Get both the spelling and the pronunciation right, as everything is written and spoken!

The content is offline and can be accessed immediately: there is no loading time, which makes the application convenient to use. You don’t need to have access to a network, nor will you incur any roaming charges: it is a better alternative to using a web-based translation service on a smartphone.”

The release date for America has not been announced yet. 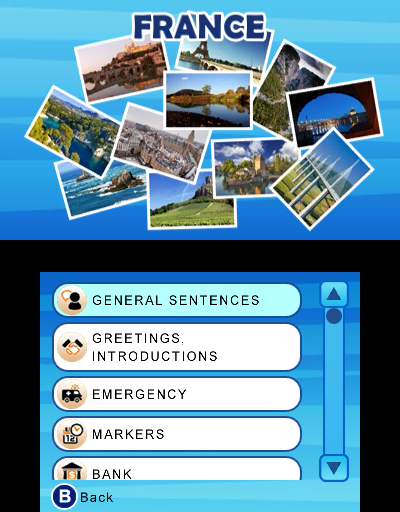