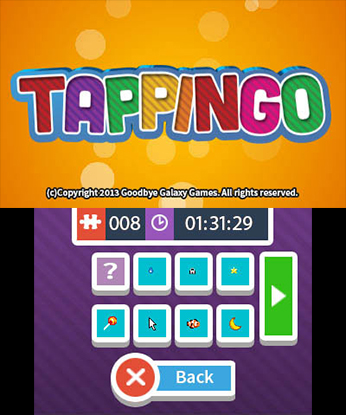 GAMEPLAY:
This is an interesting new way to see grid-based puzzle games which offers a new mechanic that works quite well.When you start a level, you will see blocks with numbers (some of them don’t have numbers) in the tactile screen and the actual result in the upper screen.When you move a block in one of the four directions, it will extend along the grid until it touches another block. The little number on it will tell you how many spaces it needs to extend until it stops for another block.Sounds easy, right? Well, it isn’t. You can’t control the length of a line therefore, you will need to conceptualize and find ways you can move the blocks until you find a solution which creates walls to contain other lines. You can always remove the line by touching the original block and get it back to its original state.The game features a total of 104 levels, unlocked from the start, being harder and bigger with the amount of time (i.e. the level number being bigger). Some of the levels can be finished in around one or two minutes, but some of them will need more than five minutes before they’re completed which requires a lot of patience. The good thing is that every level has a timer to record your best times in essence adding replay value to the formula.The game is controlled with the stylus, and it works excellently, but there are two big flaws that will sometimes ruin your experience, changing it from fun to frustrating.The first one is the lack of the zoom function that makes the bigger levels hard to control and even harder if you aren’t using a 3DS XL as it is easy to make a mistake and touch another block instead.The second one is the lack of a “back” feature and this combines very badly with the first flaw. If you move back another block by accident and you were using that line as a wall for other blocks’ lines, those will start to expand making you have to start a section from zero. 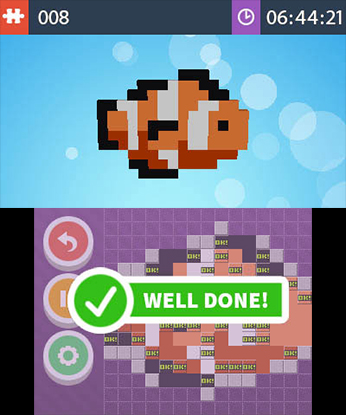 GRAPHICS AND AUDIO:
The game looks good in both screens which offers a nice menu design and a 3D effect that works excellently.The soundtrack offers different songs; it’s relaxing, cool and original. The sound quality of the game is great and the sound effects are cool too.

PRESENTATION:
The presentation of the game is a mixed bag. The game design is great, the idea original; it includes a good manual, an easy tutorial, and ultimately, a good quantity of levels with some replay value.On the other hand, there is also a lack of a sharing options for your scores and the two big flaws I pointed out in the ‘Gameplay’ section.

CONCLUSION:
Tappingo is an interesting offer for the 3DS eShop with a lot of levels and sells for a good price that offers pure fun for puzzle fans. However, some flaws don’t allow the player to have a perfect experience. Grab it if you desire; it’s actually fun.