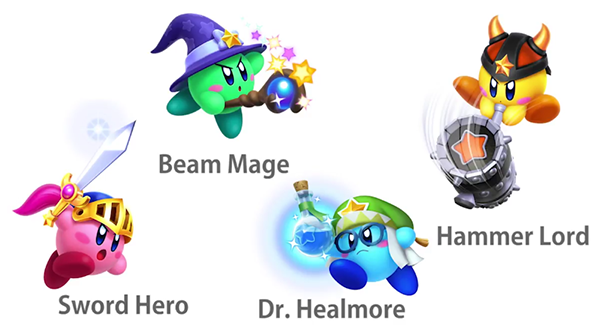 The roles in Team Kirby Clash Deluxe are surprisingly different from each other and the copy ability they are each based on. I personally like all of them for different reasons but liked some more than others. Here is a quick guide of each of the classes to hopefully help you find the perfect one for you.

The sword hero is probably the simplest and what you’d expect. It has quicker medium strength attacks and can run around quickly. Its charge attack can move over distances and does a decent amount of damage. Its attacks are all for close combat, however, they do have a lightly larger range than the hammer lord. It also has a guard move that raises an area shield for your teammates. Perfect for someone who want to be up in the action and running around.

Hammer Lord is the tank. It has a massive damage output, but at the cost of speed and mobility. Its dash speed is about as fast and the normal walking speed. His charge attack does massive damage, however, it is difficult to execute without getting hit since it is very close ranged. On the plus side, you can move while charging your attack but only very slowly. Great for someone who wants to do a ton of damage.

As you can probably guess from the name, Doctor Healmore is the typical healer. His charge attack puts down a healing aura that heals any teammates who walk inside while it’s active. His attacks are low powered and aren’t able to do a whole lot of damage to enemies. The good thing is that some of them are ranged. Best for those who want to help, but also stay out of the fight. Great for making sure your teammates stay alive.

Beam Mage is an attacker and a supportive teammate at the same time. His damage output is slightly low, but his charge attack has some very nice benefits. His charge attack does decent damage and also help to freeze the clock for a certain period of time. It is a long range shot that travels the length of the screen. It’s very helpful to freeze time to avoid running out of it and also get in lots of free damage along the way. Close ranged attacks will also push you away from the enemy. Good for ranged combat and coming up close when safe.

Hopefully you were able to learn something new from this guide of the different classes in the game.

It seemed fun at the time.