Tekken 3D: Prime Edition was a very hyped release for the 3DS. With other excellent fighting games on the 3DS like Dead or Alive: Dimensions 3D and Super Street Fighter IV 3D Edition to compete with, the game had a lot of expectations to live up to. Upon its release though, it received what can be described as a lukewarm reception at best. It still remains one of the major fighting titles for the 3DS though, which is why I chose it to give a second look-over more than a year after its release. 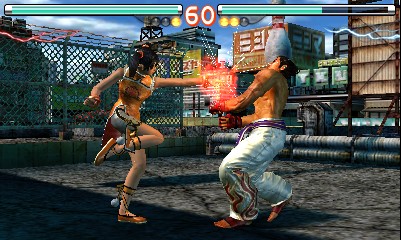 Tekken 3D isn’t an entry into the main series. There is no Story Mode; canon and chronology go out the window here. It’s a game designed with portability kept a priority. The Quick Battle mode included in the game is a testament to that fact. It’s for you to whip out your 3DS when you get a spare five minutes or are bored on a bus, beat a CPU character up and put your 3DS away again. Although this doesn’t mean the game’s average play time will be long in your 3DS’s activity log, it’s nice to see a fighting game that doesn’t try to be a home console game on a portable console.

The Tekken games have always impressed in the visuals department, and Tekken 3D: Prime Edition is no exception to that. The screenshots might make the game look underwhelming, but you’d make a big mistake by judging the game from those. It’s in movement that the character models, with their smooth animations, really shine. The game runs at 60 FPS, which is quite an achievement for a handheld game – even more so when it still runs at 60 FPS with 3D turned on. The background environments, however, don’t fare quite as well. Most of the backgrounds are just static images that move in time with the camera. Considering the excellent animations and character models, this seems rather half-hearted on the developers’ part.

Obviously the controls for fighting games matter a lot. The 3DS’s + Control Pad isn’t really placed to feel instantly familiar in fighting games. Playing the game with the + Control Pad can be a bit tricky if you haven’t broken it in already, although Tekken 3D is so fast and furious that it’ll definitely help you speed that process up. Throws can be executed using the touch screen, which is quite a nice addition and makes the touch screen useful.

The gameplay is lightning-fast and oily-smooth. Tekken fans really won’t have much to complain about in the gameplay. You use the face buttons to attack and do combos. There are 41 characters to choose from, all with different combos and all taking a long while to master if you haven’t done so already. Fortunately for people new to the series, the game doesn’t have a cruelly difficult boss like Azazel from Tekken 6 – in fact it doesn’t have a proper boss at all. This can be justified by saying it’s for the same reason that there’s no Story Mode, but it does mean that the difficulty isn’t balanced if you’re not as good fighting some characters as you are at fighting the rest. It doesn’t ramp up steadily even though gaming has been teaching us that doing so is the best course of difficulty for a game for the past thirty years.

There are some new modes added. The most notable, perhaps, is Tekken Cards, which contains over 700 cards to be unlocked which will stretch the play time a long way for completionists. I didn’t really see the ‘Special’ in the Special Survival Mode though – it’s not different from the Survival Mode as you take on as many characters as you can with one health bar. I really liked the fact that there is online multiplayer in the VS Mode though. 3D is disabled in online multiplayer and it lags slightly sometime (maybe it’s my internet connection?) but the fact that there’s online multiplayer is always great.

As a bonus, the CG animated film Tekken: Blood Vengeance is included with the game and can also be watched in 3D. It’s great for an extra, and it’s pretty generous of the developers to squeeze a game and a 3D film into a single cartridge. While we’re on this topic, Tekken: Blood Vengeance is much better than most films based on video games and the animation is amazing, but the English script is cheesy and has some awkward dialogue and it’s just an OK movie in reality. 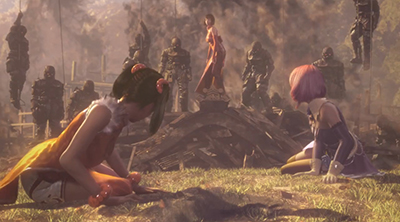 It’s nice to see that Tekken 3D doesn’t take the generic fighting-game-trying-to-be-big-on-a-small-console and instead aims for being a fighting game made to be portable, but it falls short of the high standards set by its predecessors. The music and sound effects are fine (the sound effects are the same they’ve been in every Tekken game since forever), but there isn’t much in either to write home about. All in all, it’s a decent fighting game and will satisfy both fans and people who want a portable fighting game that’s really, well, portable; but – barring the creepy-crawly awful Tekken Hybrid – you won’t get into too many fights if you went around saying that it’s the worst Tekken game to date.