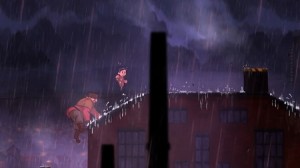 GAMEPLAY:
Teslagrad is a 2D-Platformer game with puzzle elements on it and a non-linear metroidvania structure. As you should now, they’re two different sides of the magnets: negative and positive (in this case red and blue). This means red elements reject other red elements but attract blue ones, and the same way happens in the other way: blue reject other blue elements and attract the blue ones.

In this case, you will need to take advantage of the magnetism in order to progress in the game, electricity, where the game also features four different bosses on the way before the final boss. 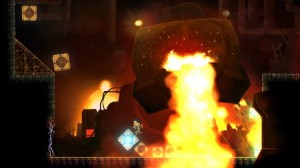 When you’re progressing you will get some upgrades, first you will get gloves that will allow you to change the magnetism of the elements you’re able to, like boxes.

The second upgrade will be an item that will allow you to teleport small distances, being able to avoid enemies attacks or electric fences.

The third one is a cape that will allow you to magnetize yourself, allowing you to use the environment to stick in some places or being able to move long distances, being the main example the little elevator part where you can access the top of the tower.

The last one is a portable laser, where it replaces the gloves if you are touching the ground, allowing you to change the magnetism from a long range and also attack enemies, well, actually kill them. 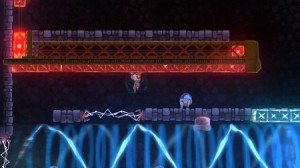 Teslagrad will be a good challenge, still there is no health or lives system: if you get damaged, you die, restarting the zone or the boss from the start. This can make the experience quite frustrating for non-experienced gamers, where in the case of the bosses, learning the pattern will be needed in order to beat them.

The controls works great, still it can be hard to get used when you start. If for some reason you don’t like them, you can easily change them for a setting you like. The game duration feels right, but it feels more close to the short side than the large one, mostly if you don’t explore searching all the cards.

GRAPHICS AND SOUND:
Teslagrad uses an steam-punk style with hand-made backgrounds environments (and there are a lot of them) based on the old Europe, looking really great. Everything looks really great with some great touches on the game details, still some animations needs to be a little more fluid in my opinion.

The soundtrack of the game is wonderful, you can ask me more details but it’s wonderful. I also highly recommend to unlock the secret ending of the game, again. The sound effects are limited but they’re well done. 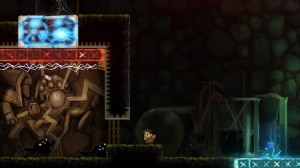 PRESENTATION:
The presentation is quite good: there’re no instructions at all but the game gives you hints on how to play, the Off-TV mode works well, there’s a good quantity of options and the interface is minimalist but nicely done.

The manual is quite simple but it works, there are six save slots and something interesting are the languages included: Chinese, German, Spanish, French, Italian, Dutch, Norwegian, Polish, Brazilian Portuguese, European Portuguese, Slovak, Serbian, Russian, Turkish, and Ukrainian, a lot right?

The only problem with the game is a little wrong explanation on the manual: pressing right on the Control Pad doesn’t show the amount of cards collected when you’re on the menu, the tactile screen is needed to change the page, nor it doesn’t explain the list can be scrolled. Nothing big but can be confusing for some players.

CONCLUSION:
Teslagrad is a great game, but it will be hard to appreciate for certain players that lacks of patience or get frustrated really easy, but experienced players will really enjoy this. Something to add is the Wii U version is more expensive than the PC version, but the Off-TV play should compensate it.