Imagine a world without a blue sky, ruled by daemons and law enforced by beastfolk who think little of humans. That’s the type of setting players will find in The Alliance Alive HD Remastered where an alliance must be made to stand a fighting chance against enemies.

Explore, build up an alliance, fight, unravel the story and fight some more. That’s the game in a nutshell. With a variety of weapons to equip, enemies to encounter and ‘worlds’ to explore, The Alliance Alive HD Remastered will keep you occupied for many hours. 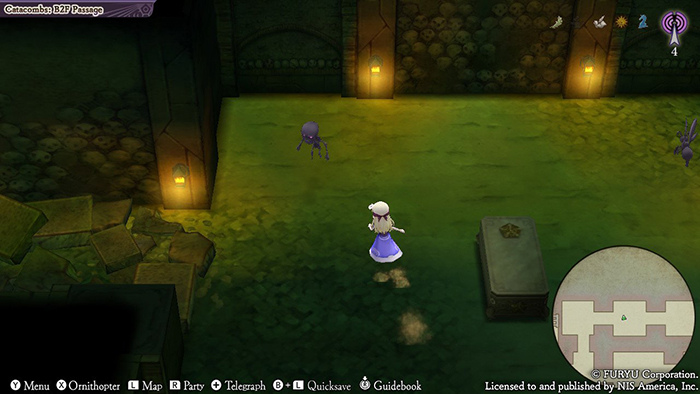 While exploring the many different lands which try to outdo each other in scenery, a number of enemies will be waiting for you to cross their path and threaten your progress. You can choose to fight, dodge or escape. Enemies are present on the map and will chase after you if you’re spotted, however, it is possible to outrun them to avoid a fight. It’s perfect for people who want to explore and are tired of constantly fighting enemy after enemy. Traveling through the map is also made easier the further you get.

Fights are turn-based and who strikes first, whether it be one of your characters or an enemy, is determined by the character’s agility stat and possibly weight. Arts, commonly known as skills in other games, have their own little animated action scenes during battle when executed. They depend on a character’s SP which slowly recovers each turn or with the use of a consumable item during battle.

A character who falls in battle will lose some of their max HP until they rest up at an Inn. Therefore this game will sometimes have you abandoning your objective to heal up at the nearest Inn so that you can return to fight at full strength.

There is a twist when it comes to learning new Arts. Instead of the common method of leveling up to learn new skills, The Alliance Alive HD Remastered takes a different approach by randomly letting your characters learn new Arts when they’re about to attack. This helps in a way that your possible favorite character will not be left behind in terms of strength when you recruit more powerful characters later in the game. Arts themselves can be leveled up to increase their power while max HP and SP have a chance of increasing after winning a battle.

The game offers a variety of weapons and different Arts to learn/use. Don’t want to use the greatsword or spear that came with a character? No problem! You can put an axe and a shield in their hands. Spells are exclusive to daemons/beastfolk, however, do not fret as humans have a worthy equivalent although it has its differences. As characters are capable of learning many Arts, the ‘sort order’ feature is a godsend for a game such as this one. It solves the issue of scrolling through a lot of Arts just to pick your favorites. 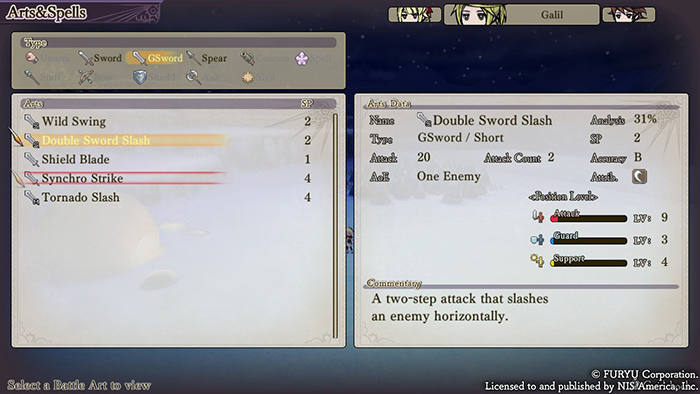 While the soundtrack isn’t bad, don’t expect to be overly pumped up for a battle scene. The music you listen to in this game is more relaxing if anything. You may also find yourself using the same Art over and over until the character’s SP is low or the state of Ignition is active. The Ignition state can be extremely overpowered early in the game but its final strike does come with its risk to balance it out.

If you thought the game was all about gorilla tactics, think again. There is some strategic thinking involved and one is known as Formations. You can choose one of the default formations, unlock them or make your own. The positions you place your characters on the grid formation field improves how well they perform on the battlefield. From dishing out extra damage to tanking a hit to being a better healer.

While fights are fairly easy, some boss battles are not. Even though some battles are accessible early in the game, they may not be meant to be done at that specific time. As for the boss fights within your league, you’re often going to try to hit them as hard as you can and pray your next attack will conclude the fight in your favor. This is because the enemy’s HP is not visible. 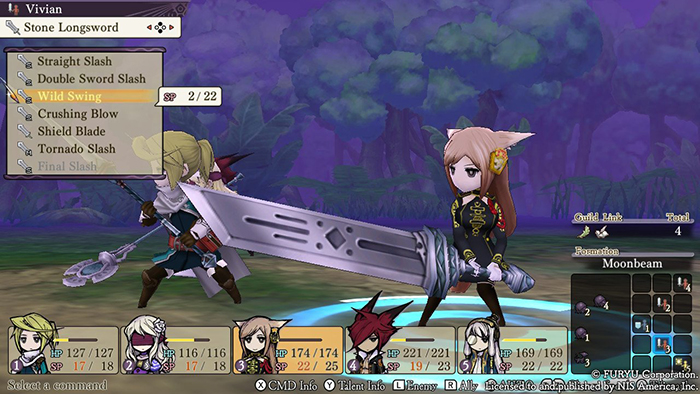 The obstacles thrown your way are mostly straightforward and the main single-player campaign will not leave you stranded at any point. You will always be informed of the next step to take to continue the story. The guidance you receive when starting the game will also help you learn the ropes and redirect you to the guidebook if you ever want to relearn or read up more about something. 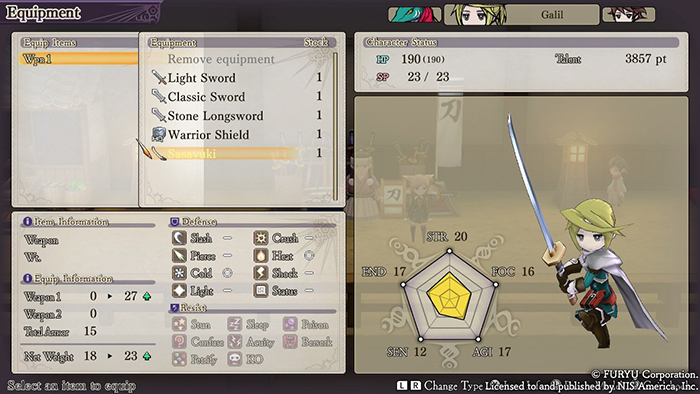 It isn’t necessary to grind in this game, however, if done at the correct locations, it can result in easier fights. An auto-battle option is available as well as a fast-forward button, making grinding less of a chore if the player decides to go through with it. Although this makes grinding less of a pain, the auto function isn’t perfect. You will be required to start the auto-battle at the beginning of each battle.

Of course, it goes without saying that upgrading weapons and gear is a necessity to hold your own during battle. The game’s currency isn’t easy to earn so you may encounter struggles with getting the very best gear on all of your characters.

Unfortunately, if you were looking for an RPG with voice acting, you’re out of luck if you’ve set your eyes on this game. Although it’s not much of a bummer because of the emotionless faces characters make and the comedy behind some of the dialogue. 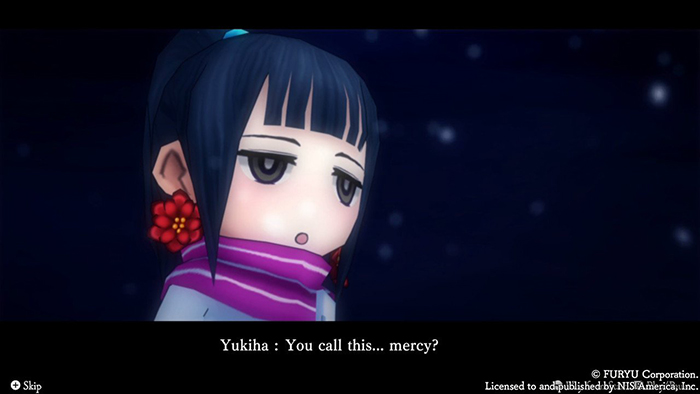 You’re also not going to be tortured from rewatching cutscenes if you’re replaying the game because there is a built-in skip option. Although the wording says “skip”, it is a fast-forward button, however, it still does the job right. If you’re a slow reader, the game has you covered as well. Not only does the game have a fast-forward option, but it also has an option to restart the cutscene in case you missed something.

There are two options for saving: normal save and quick save. A normal save is done at specific save points (eg. Inn) while a quick save can be done anywhere. Quick saves can trap you and force you to restart or load a different save if you’re not too careful.

Finishing the game unlocks New Game+ and EX so there is a reason to replay the game. One lets you keep most of your belongings except for guild content while the other strips you more but kickstarts you with a generous amount of talent points. It will also be possible to recruit characters who you couldn’t in your first playthrough. New faces always brighten things up after all.

The Alliance Alive HD Remastered will certainly keep you busy with over 35 hours of gameplay, an interesting story, a little humor here and there, and some challenging boss fights that will make you sweat (not literally). You may find yourself spamming your most powerful Arts during fights with the intention of unlocking new ones or leveling them up, to the point it may become tiring the more enemies you fight one after the other in the long run. On the bright side, players can try to avoid battles when they need time to recuperate, however, sometimes the enemy will not make it an easy task.

The remastered version of the game does not offer much except for new visuals so there is no major benefit of getting the Switch version if you’ve already experienced it on the 3DS. That is if you don’t want to relive the experience again on a new console that looks much better.