Instead of telling us a new story that could expand the world of Thra and allow us to know more about it, BonusXP has decided to retell the facts that have taken place during the first season of the series. The narrative is awkward and very confusing which makes it significantly difficult to follow for those who do not know the story. In fact, they have not even bothered to offer a minimum of character development that make us feel that those heroes and villains that we see on the screen are really the same as those we care so much for or despise, beyond their physical appearance.

As a licensed product, they could have included sequences extracted directly from the series that would help us get into its history and give us a better context of what is happening, but what we really find are some poor and brief dialogues in boxes of text with static illustrations and no dubbing of any kind. This kind of narrative and stiff characters make the game lose the magic that this universe emits, making it incapable of feeling the world of Thra and the feelings in which this work is based on.

We Stand In Battle

In a majority of the missions in the game, you will have to take care of enemies while trying to complete the objective you’ve been assigned to, such as opening cells, getting to an exit on the map or fighting a boss, without forgetting the conditions for defeat, like defending a specific character from being defeated.

One of the positive points in the game is its battle system. The confrontations are very different from one another. Maps are full of obstacles or unique traps which can be used to your advantage, especially during boss fights designed similar to a real puzzle, where you must use the same strategies that the characters use in the series against them; giving it a tip of fidelity from the original work that we like so much.

It should be said that this SRPG takes a long time to show its potential, so at first, it will seem like a tactical role-playing game taking advantage of a license. Initially, there will only be three jobs (classes) with very few skills at our disposal, almost all of them useless. As the progress is slow (despite the farming), it will be mandatory to reach level 10 in order to promote our characters and have a secondary job to see the differences in weight. 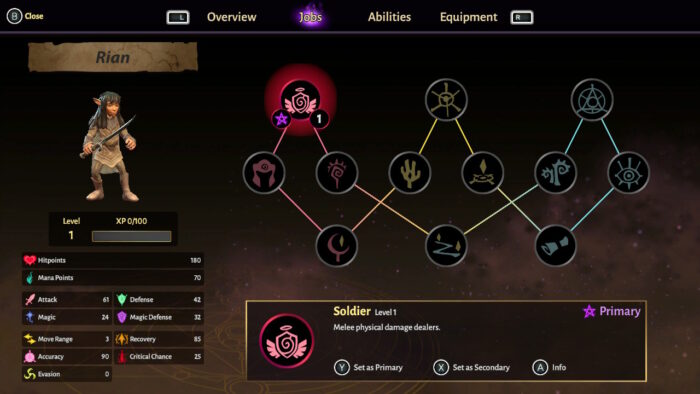 It is there when we go from the jobs of Soldier, Scout and Mender to separate in other more complex classes, such as Paladin, Stone Warden, Thief, Tracker, Bramble Sage or Adept, which in turn derive in three more specializations (Grave Dancer, Strategist and Song Teller). All of this in relation to the gelfling, because we can also recruit, for example, a podling, with five new jobs, or even a fizzgig, which in this case only has one.

You will likely not change the characters in your main group often since those who do not participate in missions will not receive experience points. If you constantly modify the team members of your party, you will stay well below the recommended level in story battles, forcing you to repeat the same optional fights repeatedly to level up. It becomes an extremely tedious task to maintain their levels at the recommended numbers in a game with 14 characters in which you can only send an average of four characters to fight per mission.

Perhaps this figure has numbers that have attracted your attention for being low, which brings us to the next point: the scale of the fighting. Forget about gigantic maps in which there are real armies fighting each other since everything takes place in tiny scenarios and in which we hardly have room for maneuver, so the number of rivals is usually very similar to ours.

Battles are fast and direct because they are very simple and we don’t have too many tools to think about our next movement, although they get longer than they should because of tedious and cumbersome controls. Additionally, the slow and boring animations to see even if we accelerate them, while the second responds to an interface that seeks to become our greatest nemesis.

In a genre like this, controls and menus have to respond quickly and efficiently, also clear and intuitive, is something fundamental, but The Dark Crystal: Age of Resistance Tactics does just the opposite, forcing us to go through lots of additional steps to do anything. It is from something as simple as moving (where we must select the character in turn, open a radial menu and choose the option to move) to others such as undo an action that should be executed with the press of a button. Unfortunately, this is a fault that also extends to the management and personalization interface of the characters, making the preparations of each mission a real pain while we navigate through lots of submenus and takes dozens of steps that feel totally unnecessary and counterproductive. In addition, they do not respond precisely in an agile way.

The Darkening of Thra

Its graphic section follows the same line as the rest of the game, with quite simple scenes and characters that stay far away from capturing the beauty of Thra, not to mention its animations and effects, far below current standards. When playing on handheld mode, some of the letters are really small, to the point that some lines are barely visible or virtually illegible.

Finally, the sound leaves us with a soundtrack with themes that adapt well to the musical style of the show, but which is clearly scarce, as there are very few compositions. They are not particularly varied and are repeated until exhaustion. The effects also leave a lot to be desired and do not always work or sound when they have to, and the dubbing is practically non-existent, except for a couple of shouts emitted by the skeksis we will encounter.

The Dark Crystal: Age of Resistance Tactics is a big disappointment for fans of this magical license. It is not that it is a complete disaster, but it is incapable of capturing anything that has made the work on which it is based on great. SRPG fans will find its turn-based gameplay decent with its lengthy campaign and a reasonable amount of role-playing depth for those new to the genre.

A teacher who loves to spend time with his family. He also loves to read and play video games.