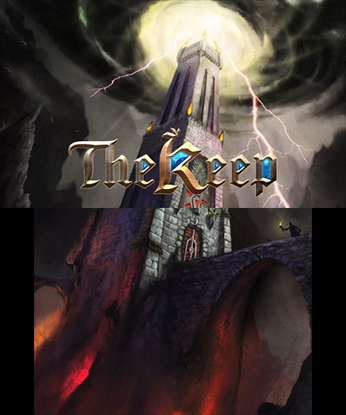 Yet dungeon-crawler genre has been curling as a niche. Famously known for its difficulty, not everyone dares to challenge. Its mood is often interpreted as gloomy, or even fierce, since sometimes you are in the verge of death while dazed in the maze. On the other hand, dungeon-crawler is mesmerizing some people – either by its daunting environment or the alluring puzzles exercising your gray cells.

Cinemax want to capture those feelings while taking advantages from the Nintendo 3DS touchscreen feature; their newest eShop title is The Keep. As a dungeon-crawler enthusiast, my curiosity tickles me to see how successful their effort to bring this genre in these days.

The Keep tells us a classic tale where Crystals, old resource to magic is discovered, yet too dangerous to control. Upon discovery, Watrys – a nefarious wizard – rises from darkness with terror following him. The Council wash their hands as they act innocent to hide the terror behind the curtain, but eventually Watrys’ destructive power slips out. Our nameless – but not silent – protagonist here is one of the brave people who have been barging in Watrys’ territory, though many have died along the way.

That story alone is nothing new to me, since I consider the plot as mainstream. The nice thing is how Cinemax execute the tale. It’s told by a narrator with awesome voice acting, written with good choice of words, and to write the plot between each chapter backwards is a powerful move. Through the journey, conversation appears as a part of the story with very convincing, full voice acting. 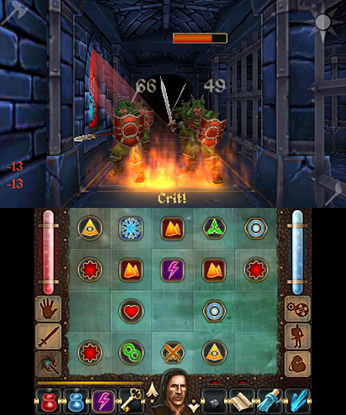 The innovation comes alive as 3DS touchscreen is fully used in the gameplay. You could say that most features are controlled by the stylus. There are three sets of controls, but basically you will need your analog stick for movement, control pad or ABXY buttons for shortcut, and everything else via touchscreen. It might be intuitive since the battle input – that I will explain later – are given by swiping the stylus. On the other hand, this scheme is ergonomically tiring. You can only hold your 3DS with one hand (which also controls the analog stick) since your other hand will always grip the stylus.

Yes, the battle input in The Keep is very intuitive, that reminds me of Inazuma Eleven that also heavily uses the stylus. From a 1st-person perspective, you may attack with your weapon or via magic incantation through stylus-swiping. Physical attack gets a 3×3 grid that lets you attack horizontally, vertically, or diagonally, to certain layout. Imagine the upper screen is divided by that 3×3 grid, then you will know where to attack – enemies on the ground get attack on the lower grids, flying enemies get higher grids, and so on.

Magic incantation serves both as offense and buff. Sets of magic are prescribed by scrolls, and the runes are the ingredient. Your next task after collecting both of them are placing the runes into a 4×3 grid. The puzzle is how to put runes in a certain way so you can cast more magic. The magic casting mechanism is the same as the physical attack but more flexible since you can swipe a zig-zag or L-path according to your rune placement. 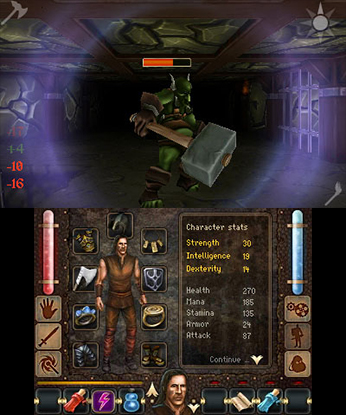 What makes The Keep difficult is the real-time battle. There are stamina point and mana point (aside of health point) that decreases each time you do physical attack or magic incantation. Though the bar replenishes over time – and there are other options to heal – I got many cases where I had to run away from enemies… Either because my loot was depleted, or I did not have time to drag the item to my avatar (that’s how you use consumable item). It seems like that hit and run looks like the only strategy to win, and I don’t really like this. Moreover, you cannot grind, since the amount of enemies is fixed. It feels more like a survival than an RPG; that you cannot change strategy to defeat enemies. It’s relieving that you can save anytime in the game, and better than that, to change difficulty.

The dungeon design is an old-school one – yeah, real dungeons; maybe The Keep is intended like that. What really lacks for me is the puzzle. I found nothing interesting other than playing with the lever, finding hidden rooms, or stepping on certain stones to open a path. It isn’t as challenging as defeating the enemies since you do not have to think too hard to solve the problem – even trial and error in a couple of minutes of work. I could also see their effort to design characters as realistic, but it fails to make them appealing. Yet the music perfectly fits the dungeon atmosphere they want to capture in this game – though most of the pieces are gloomy, they never bore me.

Through the tiebreak between innovation and control difficulty, The Keep will keep you on your toes. As a dungeon-crawler, it’s once again not a game for everyone, but $12.99 worth superb voiced narration, dialogue, and the atmosphere.