The Legend of Legacy isn’t a game that focuses significantly on story. Instead, it revolves around exploring unknown territory and battling monsters until the character’s objective has been achieved. That does not mean the characters are given no backstories at all. As time passes, you should learn more about the character you chose at the start of the game. They all have a purpose on Avalon that somehow connects them together and a three-man party will eventually be formed to go on an adventure to accomplish their goals.

The game starts off with a list of playable characters to choose from and the story will be told from the perspective of the character you chose. That just means a little more face-time for the character even though there isn’t much dialogue or cutscenes. 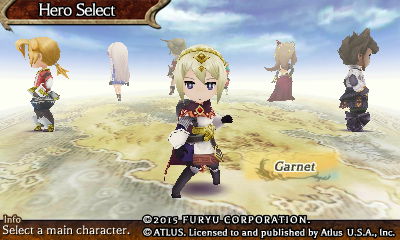 The combat gameplay will have you thinking strategically from time to time to overcome certain challenges by changing stances in your battle formation to fend off attacks and dish out sufficient damage in a turn-based battlefield. Instead of the common leveling up system in a majority of the games we see nowadays, the game uses a process where HP, SP, Guard and Skill stats have a chance of increasing with each battle. Everything else is dependent on the gear you equip on your characters and stances you use.

Occasionally you may find yourself as if you were screaming at your characters to block or counter attacks and at other times when they fail to meet your expectations, you might feel even more disappointed than a football fan whose opposing team scored a goal.

Shadow figures in the form of animals represent enemies appearing on the map which makes it possible to avoid encounters, however, the game does not make it too easy. The noise from footsteps and the sparkle from items reveal their location even in darkness. You get penalized for fleeing from a battle, making you start over from the entrance of the map. It can get annoying to the point of wanting to quick-save after covering a bit more distance from your last save point if you’re just not in the mood to battle weak or powerful hordes of enemies. Having a fighting chance of dodging enemies instead of the guarantee of running into them after a certain amount of steps saves you time and that sigh-feeling players experience from battle scenes popping up when you just want to move from one point to the other. 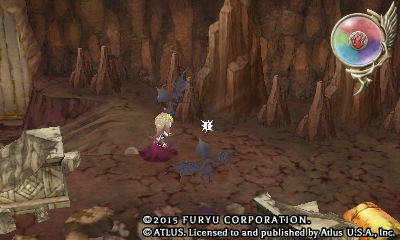 Fleeing a battle isn’t the only way to get penalized in the game. Letting your party members drop to 0 HP and taking any additional damage cripples your team pretty badly until you make a visit to a resting place (eg. Inn), eliminating any carefree decisions you might have made during battle, especially when your primary aim at the time is to safely travel to a boss.

The game has an exceptional ratio of weak and strong enemies you will encounter in each area. A small amount of creatures that can be considered as bosses are extremely difficult to beat (one took me over 60 attempts to finally slay the beast), but even without the option of choosing the difficulty of the game, it has been made with casual and hardcore gamers in mind. 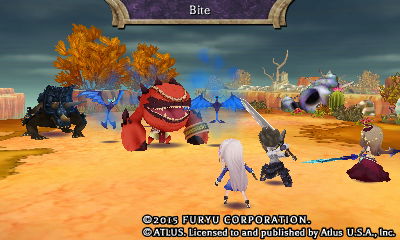 The graphics are gorgeous and the 3D effects are impressive for a 3DS game. The Legend of Legacy is definitely a game you might want to have 3D enabled for some parts of the game (including battle scenes). Character designs are not short of perfection, having a variety of characters to choose from, from downright adorable to muscularly strong. There should be a handful of characters each player might want to play as.

The controls are not difficult to memorize and the music blends in pleasantly with the gameplay. Only when fighting the same powerful monster (eg. a boss) repeatedly for a ridiculous amount of times will you want to turn the volume down. Even if you heard voice acting will be present in the game, do not expect it from character conversations because you are only going to listen to it from the narration every now and again.

The amount of content the game offers is satisfactory and with multiple characters to play as from their own point of view after beating the game, there is replay value even though you will find yourself playing over with the same maps and enemies found in Avalon (although all discoveries can’t be made in the first playthrough). To top things off, the game offers a special feature after beating the story that makes it easier on the eyes when using previous characters you played with in your new game. It may make a significant difference for some.

The Legend of Legacy does not have story twists or many conversations between characters concerning the story, however, it does offer a great exploration experience with a lot of freedom and challenging battles to triumph over. It is a game you will most likely find yourself playing over to see the story from each of the character’s perspective after beating the game.