If Liberation Maiden is a mini-Kid Icarus: Uprising, then Thorium Wars: Attack of the Skyfighter is a mini-Star Fox 64 3D. Big John Games have produced a game that, despite it shortcomings, fulfils its promise of dogfighting, barrel-rolling action to players. The game is a sequel to the DSiWare title, Thorium Wars.

The story is pretty simple, but if you haven’t played the original Thorium Wars, you might feel like you’ve started reading a book in the middle. Thorions, a mechanical species of war machines, have decided on a rematch after their loss in the original Thorium Wars. You must pilot one of three Skyfighter -each with their own strengths and weaknesses in terms of firepower, speed and armour strength – through eight levels to defeat these pesky robots once again.

The gameplay has all the smooth-flying, guns-blazing thrills a good flight-action game should give. The controls are simple and as responsive as you wish. You can perform a barrel roll to dodge incoming objects, but there are no quickturns which causes problems in closed, narrow paths. There are two types of guns – a rapid-firing one and one that you can charge up to unleash a more powerful attack. Switch between them sensibly to prevent your guns overheating. Crashing or being shot down in flames imposes a time penalty if you continue, which affects your rank.

The level design was great in most of the levels, but there was one that was very troublesome especially if you picked the Shango Skyfighter, which is the fastest, because there are no quickturns and steering in the icy corridors leads to immediate crashes. One of the levels seemed pretty inspired by Resistance: Retribution, and was excellent. The city level, while great for flying around in, could have used a little more detail though – it felt small and empty for a city. Still, most of the levels are well-designed, but you aren’t allowed to fly too high in the majority of them. 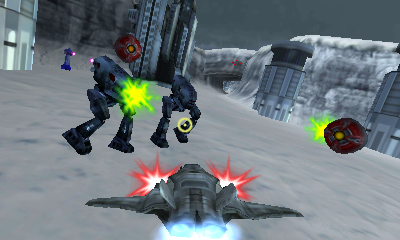 The visuals never make Thorium Wars: Attack of the Skyfighter seem limited as an eShop game – they’re on the same level as a retail game, at least, which is to say the game is beautiful. As mentioned before, a couple of levels would have loved a little more detail. The water-splash effects were a little less impressive, but to illustrate how excellent the rest of the graphics are, I’ll say the water-splash effects seemed out of place in a game that was otherwise so beautiful. The enemies are well-designed and look brilliant, especially the somewhat scary Thorions that would dive in and out of the water. As with other Big John Games productions, the presentation is tidy and easy on the eye.

Thorium Wars: Attack of the Skyfighter is one of the best-presented eShop games to come along in a  while, so if you’re willing to play it despite the relatively short time it takes to finish it, I’d tell you to go ahead.