A NEW ADVENTURE IS HERE, GO TO YOUR WALL! 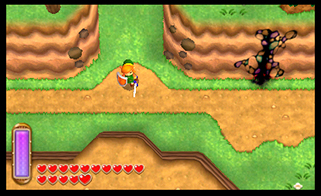 STORY:
This story occurs six generations after the events of ‘A Link to the Past’. Everything was fine in Hyrule, however, the darkness appeared. A strange wizard appears and converts people into paintings, including you.

Link will acquire a new power in the process, allowing him to convert into a living painting when needed. Zelda and the Seven Wise Men are kidnapped by this wizard who invokes the power of Ganon. In the process, you meet a new world, Lorule, and a dark mirrored version of Hyrule. In addition, you also meet its princess, Hilda, who will help you in your quest. Will Link be able to save her and both worlds?

GAMEPLAY:
Like any 2D Zelda game, you have to travel to different dungeons and beat its boss, while solving puzzles and defeating enemies. You can also find hidden objects and areas that you can only access with certain items, interact with people, obtain information and hints, etc.

In this case, I will talk about the new stuff this game brings. Firstly, we have two new innovations in the Zelda universe: the items system and the graffiti skill.

Instead of winning new items while you progress in the story, you can rent them. The price of the weapons will usually be cheap, however, there’s a little thing to remember: if you’re defeated (when you lose all your hearts), you will lose your items and will need to rent them again to progress. Of course, you can also buy them after a certain part of the game and you can also upgrade to become more powerful. (skipping details due spoilers)

For the other side, there’s the new skill of Link which allows him to become a living painting, moving across walls and moving platforms. This does not make puzzles more dynamic and it also adds more freedom to move across dungeons and, why not, all of the game.

There’s more stuff that will allow you to have a better experience. For example, you will meet a little witch that will help you warp to different places. Those places are the locations of the Weather Vanes, object present in the map that allows you to save.

Something normal in Zelda games are the mini-games that allow you to win rupees or, if you do it right, a heart container. You can also win some upgrades and objects as well in the process and most of them are a lot of fun, even when it isn’t needed to progress in the game.

Those includes cuccos evading game, baseball, rupee hunting and my favorite, the Treacherous Tower, a place where you need to beat enemies to progress until you beat the final floor, bathing in glory and rupees.

The start of the game is a lot more easy and shorter than usual, allowing any player to start the game and easily learn how to play it. With time, the game will get harder and harder, and it can be a challenge even for those who mastered other games of the saga.

There’s also a use of the StreetPass feature that includes some achievements. In this mode, you need to fight a Dark Link with the equipment and skills of the owner of the original Link.

The controls of the game are perfect. Something good that they did correct is the usage of the buttons instead of the tactile screen for swapping items easily. The ‘Nintendo’ quality is really strong in this game, however, I find it shorter than the average games in the saga.

Maybe it isn’t the best Zelda or the most innovative one, but it’s indeed the start of a new era with better puzzles and a new experience in the game series. 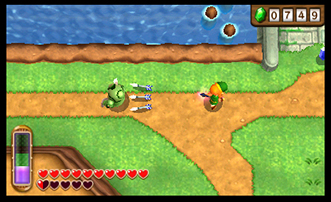 GRAPHICS AND AUDIO:
The game looks superb with the 3D effect and the 60fps, making a really smooth experience. The amount of little details given in the game are fantastic, like usual.

The main reason the game doesn’t get a perfect score in this department is because of the lag you can find in certain parts when using the 3D effect.

The soundtrack is fantastic and the little voice acting good. The reason it doesn’t reach a perfect score either is due to the large amount of recycled music, more than usual for being honest.

Being a little too much technical, the only part of the game that looks bad is in Treacherous Tower, a place where instead of using models for the public, they use animated pictures. It feels like it has a different quality than the game itself. 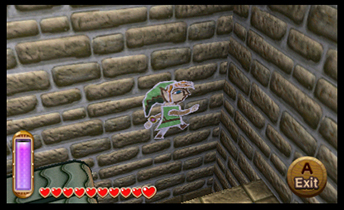 PRESENTATION:
The only thing I can say about the game’s presentation is that it’s perfect, that includes manual, game content, secrets, translation, and everything.

The StreetPass feature adds more gameplay value – defeating others’ Links and the offering of a new mode adds a reason to play it again without having the same experience with it.

If I have to find something bad about the presentation, it must be the lack of some options. For example, if you want to play it in another language, you need to change your system’s language, but again, Nintendo translations are the best ones in the video game world.

Conclusion:
‘The Legend of Zelda: A Link Between Worlds’ is a must have game for the Nintendo 3DS, mostly for fans of the series. It has that adventure feeling some games are missing. Looks great, sounds good, controls are perfect, there is no excuse not to play it.