On June 6th, one of the more bizarre games of the year for the Nintendo 3DS will be released, and being a surprise for a lot of players who thought this was a Japan-only game, Nintendo announced it in a secret Direct. A different one…

The video shows game footage just like every Nintendo Direct, but this time they used memes and a lot of them. Watch it if you have not yet, this is probably the best Direct they ever released.

Now, what does Tomodachi mean? It is the Japanese word for “friend”, and this game shows the life of the Mii that you’re playing. More Mii’s in the games means the crazier the story will be. You can reward them with gifts or clothes, their favorite food or stuff for their apartments.

If you thought this game would be like The Sims or Animal Crossing, or maybe a mixture of both, then maybe you’re right… or not. We will discover what it’s all about on June 6th, 2014. 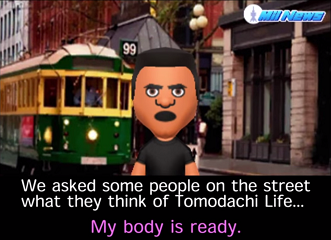 More information about Tomodachi Life will be revealed in the future. For the latest updatses, check out the game’s official website.

Tomodachi Life will be available in stores and in Nintendo eShop for the 3DS system family (Nintendo 3DS, 3DS XL and 2DS). The suggested retail prices is $34.99.