Remember (if you played it) that NES title called Battle City, where you controlled a tank across different levels with the mission to beat other tanks while defending your base? It was quite an addictive game, and my best comparison for Toon Tanks, but with simpler mechanics. Actually, everything is simple on this title, which is Toon Tanks’ main flaw.

Across 80 levels divided in four worlds, your mission is to destroy the others tanks without getting destroyed. The difference between each level is the placement and quantity of the boxes and the tanks, and between worlds the difference is just the background used. 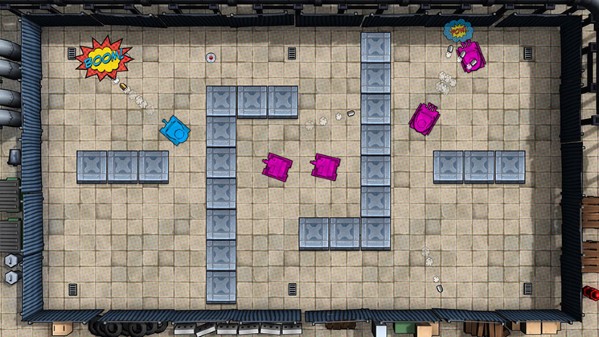 There’re three types of tanks, where the only difference is how many cannons they have (and with that, how many bullets they can shoot at once), being from one to three. The enemy also have two advantages: their bullets can bounce on boxes and walls twice (so be careful when you avoid their attacks) and also, they drop mines when they move. About their behavior on the battlefield: they usually move following a certain pattern and feature pretty basic AI.

Despite offering a good amount of levels, the variation between them is pretty lacking and since there’s no point to it such as a medal system, the replay value is also lacking, being a big missed opportunity for the developers. It’s worth mentioning that it will take between one to three hours to beat each level.

The soundtrack also suffers from being too simple: the music is basically two tunes (one when you start the level and the other when you win) and a really short war drum track that loops forever (and there’s no option to mute the music). The sound effects are basic but of good quality. 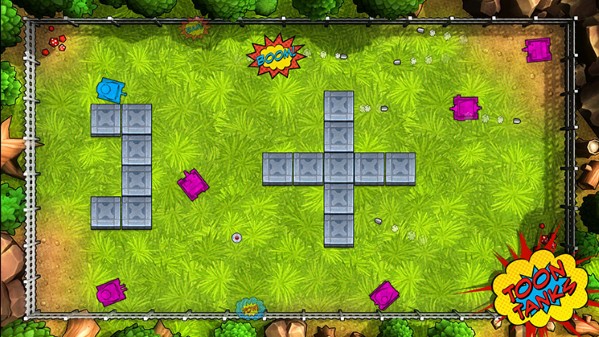 For the graphics, a comic-book style is used for both the gameplay and the interface, and it’s nicely done. I would have loved a better variation in the levels, but it fits great.

Finally, the presentation: it offers Off-TV mode by default, the instructions are explained very well with a practice stage, and the interface is really easy to use. The manual is almost non-existent because it only offers the small explanation of the practice stage; the replay value is lacking and the content limited.

Also, there’s a nice touch: if you tap on the logo, it will give you access to a secret hard level and if you win it you will unlock all the levels!

Conclusion:
Toon Tanks is a good idea, but its execution only brings half of the elements it needs to be a must-have for the console, making it just an average budget entry. It stirs up some nostalgia from older games, which is possibly my only reason to recommend it.