WHO WANTS A RETRO CHALLENGE?

STORY:
You are Shelldon and you’re living in peace in the Turtle Island. One day, Captain O’Haire and his monkey pirates sailed to the island and the little turtle with his water gun had to defend his home.

GAMEPLAY:
It’s easy, you need to walk and jump across the level until you reach the goal, in this case, you need to skip enemies and sometimes, defeat them with your squirt gun.

There’s also a health system where you will have four hearts. If you lose them all, you will die. If you’re low on health, don’t worry, enemies also drop some hearts when you beat them.

The game features 5 zones with three phases each and every phase contains 100 fruits that need to be collected. Once you collect the 1500 fruits available in the game, you will unlock the second quest.

The second quest is more difficult than the first quest. The difference with this mode, is you won’t be collecting fruits and you will have two hearts instead of four.

The controls of the game are simple, you move with the Circle Pad, jump with the “B” button and shoot with the “Y” button. The controls respond very well and feel great too. I do not like how you are not able to aim freely with your gun because it is only to the side you are facing. It isn’t bad either, but I find it awkward how you that you need to jump a lot just to shoot an enemy.

The game feels a lot like a NES/SNES era game, for example Castlevania. It brings not only the experience but also the difficulty in its gameplay. When an enemy hits you, you will lose a heart, but if you fall, you will die instantly. Now here’s the classic part: the enemies will knock you back when they hurt you, that means if you’re hit meanwhile jumping between platforms or you are just in the corner, you will fall and die.

The level design is classic and really nice, but a little repetitive. Still, the design between the first quest and the second quest is different. You will find a few enemies but still a nice variety available in the game.

The difficulty in the game isn’t balanced but most parts you only need to be careful, just like those retro games. In the game division, I can see the first quest can be for normal players and the second quest for hardcore ones. Was it a good idea? Yes, it was. 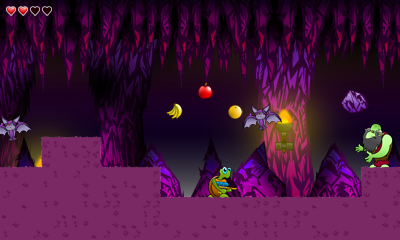 GRAPHICS AND SOUND:
The game doesn’t feature the best graphics in the eShop but they’re nice, or better said, great for its price. The 3D effect works perfect and the backgrounds are really well made.

Now, I have to say the soundtrack is great, I loved the melodies in the game. The quality sound is excellent for both, music and sound effects.

There are times I really wished to mute the sound. The FX sounds are good, however, I didn’t like what happened with Level 1-3. The FX sound for the jumping fish is awful and there are a lot of them in that level, I just played that level in silence because it was unbearable. 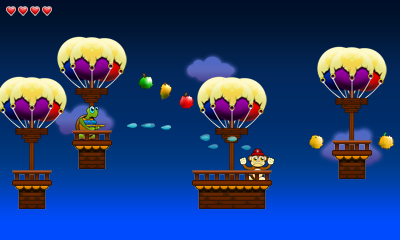 PRESENTATION:
The game presentation is okay. You can find replay value, a second quest, the option to select the level you want to play, it’s easy to use, etc.

The quantity of levels is great, two quest modes with 15 levels plus the final boss.

For the other side, I didn’t like the lack of sound options and the manual is really short, still there isn’t a lot of stuff to explain to play this game.

CONCLUSION:
For just $3, it’s a great game, with good content and good quality in overall. This game feels a lot like those 8/16-bit era platform games. The design is a little repetitive but the experience you get is classic. If you want a good and challenging platform game, remember to add Turtle Tale to your list.