Urban Trial Freestyle is a cross-platform game that people with likes in 2-D side scrolling motor-cross games will enjoy.

GAMEPLAY:
Whether it’s preforming stunts, beating your times, or just plain having fun, Urban Trial Freestyle delivers a unique experience that can’t be found in any other game on the Nintendo eShop.
This 2D side-scroller is no “hold-a-and-zip-through” game. This game comes with its own trials, solving some puzzles on the way with some hidden paths to explore.

Controlling the game is a breeze. Menus have no interest and look boring. The only menu that sparks some interest is the title screen. 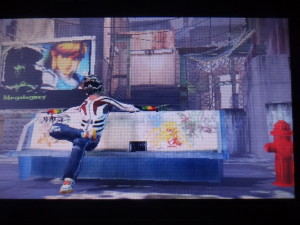 There are 5 areas with 4 courses in each area (so about 20 courses) with 5 extra Challenge courses. 25 courses that take 2 minutes long = short gameplay time. Good news is there is some replay value cause you might be trying to keep playing the track to get the world record on a stunt or get the best time.

You can play these areas in 2 modes:

Time Attack:
This mode relies on precision and speed to beat your personal record, your record out of all your friends, or the world record. You could either race alone or race with a “ghost”. If you’ve played Mario Kart you probably know what I’m talking about, if not, a ghost is a transparent racer that is a visual aid to you, basically replaying what that racer did.

Stunt Mode:
Stunt Mode is where you have to follow several stunts with their respective goals. Stunts are rated on how good you did on them, so if you did really good on all of the stunts, you get 5 stars. Some stunts are:”Highest Jump”, “Longest Jump”, “Precise Aim”, and “Flip Meter”.

Character customizations are present in this game. Players can change the character’s helmet, gloves, shoes, pants, and shirt with 5 options of clothing in each category. There are 3 bikes in the game; 2 of them unlockable. It doesn’t end there though, players can customize the wheels, engines, and design. Each part increases/decreases/leaves alone these 3 stats: Max Speed, Acceleration, and Handling. All of these items I just listed except the bikes requires in-game cash which you can get by playing courses and grabbing some on your way.

This game also takes advantage of the gyroscope function; the Challenge levels rely on the gyroscope to change gravity so you could do crazy stuff like drive on walls. 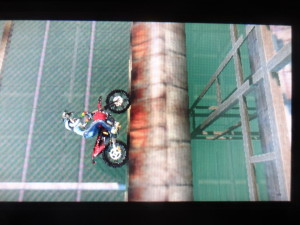 Using the gyroscope feature to change gravity = driving on walls!

Some features of the game require you to connect to the internet so you can race against record-beating ghosts or see leaderboards on who did the highest jump on a course. No online/local multiplayer, sadly.

In each level there are several checkpoints. If you fail to complete a level, you re-spawn where your last checkpoint was. That reminds me, this game has some pretty funny falling-off-motorcycle animations, although I think some more animations would be better, like doing tricks.

OK, lets talk level design. I think level design was one of this games strong points. The name of the game says “Urban” so I was expecting some kind of city background but boy was I wrong. It turns out the games levels have more creativity than I expected. From riding off the roof of a house, to doing a back-flip towards a train, players will be happy and thrilled with the experience. 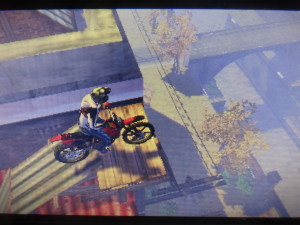 There is also the Track Builder which lets you build complex tracks to your liking. You can make up to 30 courses. There are no limits; you can put as much objects as you want. The downside is that there was no way to share these custom courses.

GRAPHICS:
I must say, the graphics impressed me. The models are pretty well done, and the background makes me think I could actually take a turn and drive through the area. 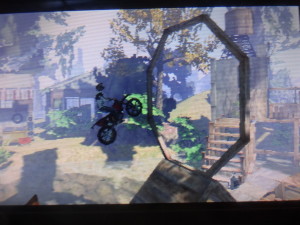 Artwork was superb. Some levels where you go by houses, the windows are poorly done but other than that I say the development team did a great job on artwork. Well done developers.

CONCLUSION:
Urban Trial Freestyle is a pretty good game. The 2D side-scroller works your mind to complete the trials within, and with the portable-exclusive Track Builder, you can make even harder challenges to test your friends. Most gameplay aspects are tip-top, while some should be worked on a bit more. Graphics are decent while audio is a bit of a weak point. If this review still doesn’t change your mind about it, there is always the free demo on the eShop. Overall, I think this game deserves a 75 for it’s quality gameplay, poor audio, and decent graphics.

Megalegacy is a big fan of Shrek and an experienced gamer that owns a Nintendo 2DS and Wii U. His favorite types of games are RPG games, action games, and adventure games.