Van Helsing’s transition from a simple Dutch doctor who kills three vampire women in their sleep and calls it ‘butcher work’ to a crossbow-weilding vampire-slaughtering master sniper is complete with EnjoyUp Games’s Van Hesling Sniper Zx100. The game is set in London. You, Van Helsing, snipe vampires and free captive humans by shooting at stuff on rooftops, from rooftops.
Anyone who played light-gun games will experience momentary House of the Dead-reminiscing nostalgia. The vampire’s character models even look something alike to the House of the Dead zombies, and the hilariously bad voice acting also helps make this game feel familiar to any light-gun game fan.
In reality, Van Helsing Sniper Zx100 is more Face Raiders than House of the Dead. You use the gyrosensor controls to aim, the circle pad to zoom in and out, the A/B button to shoot, the L button for a special attack, and the R button for a ‘bullet time’ Vampire Vision in which everything slows down and you can see hidden vampires.
You have to shoot a set number of vampires and free a set number of captive humans by shooting at their cages’ padlocks within a time limit. If you fail, you have to start the section all over again. Capsules of different colours float up and shooting them fills up meters that, when filled, earn you health points, extra time and special attacks. If you shoot a human straight in the face instead of around their cage’s padlock area, they die and won’t add to your ‘Freed Humans’ list. The vampires will initially just hop around and be scary, but later levels will have them attacking you and humans.
Since the vampires and humans look so small from afar, it’s somewhat irritating zooming in and out to find them, and more often than not I ended up depending on Vampire Vision to help me find vampires. Humans have a large ‘Help!’ written over their cages which helps find them. The game is difficult because of the time limit, even if the vampires aren’t much of a challenge. If you get 666 points, you unlock a survival mode which isn’t really all that different from the main mode. 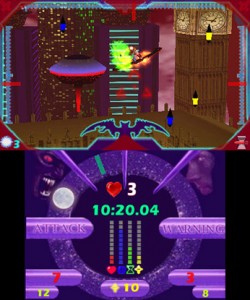 The 3D effect was really good – at the title screen the game’s logo popped right out of my 3DS’s screen. But because of the fact that you’ll be tilting your 3DS everywhere while playing this game, you’d prefer to keep it off after observing it with your 3DS still for a few seconds. The graphics are pretty basic and the sound was appropriate but not very memorable.
Speaking of tilting, one of the main frustrations of gyrosensor controlled games is that the alignment often goes wrong (EnjoyUp’s own Darts Up 3D suffered from this problem). Van Helsing Sniper Zx100 has a nifty re-center feature which fixes this problem: just press X or Y, and the screen re-centers.
Van Helsing Sniper Zx100 is good if you’re looking for a challenge, but stick with Face Raiders if you think it’s too repetitive with its high price. Once its price drops or it goes on sale, though, light-gun game fans might want to consider it.