Relationships are messy things. Drawing lines and defining what they entail can bring a mixed bag of emotions and history into play, further complicating an already tricky situation. What you say can be the difference between moving forward and burning down what you already have. This is the premise of We Should Talk, a short game with nine possible endings that depend entirely on what you say over the course of the night.

We Should Talk sets the nameless player character down in a bar—one she comes to quite regularly. Over the course of the night, she interacts with four people: the bartender, her ex-boyfriend, a random bar patron who got stood up on his date, and her girlfriend Sam. Sam is never physically present in the game; rather the player communicates with her via text message in between chat sessions with the other characters. 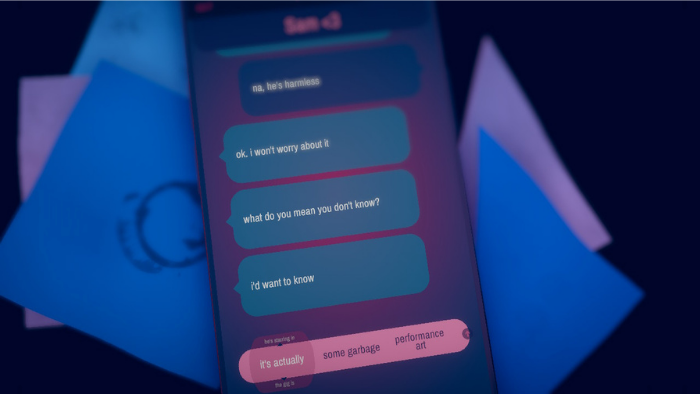 Depending on which dialogue options a player chooses, you can destroy your relationship with Sam, potentially cheat on her with at least one person, or make her the happiest she’s ever been. Flirting with everyone in the bar is an easy option, and while some dialogue options can feel like you’re drawing a hard line against their advances the characters don’t always take it as an absolute no. It can often be hard to see if your choices made an actual impact until the end of your run. 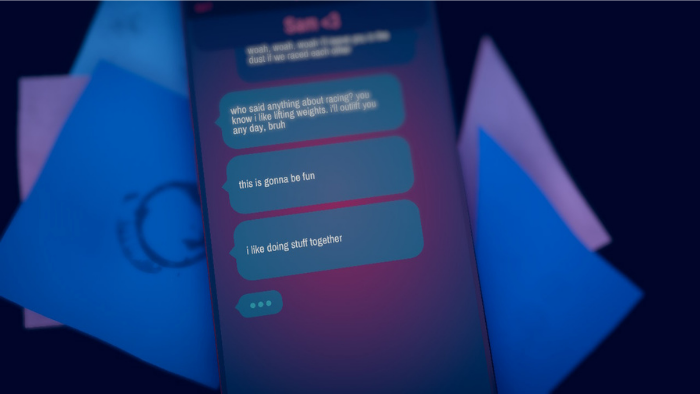 Perhaps the biggest praise that can be heaped on the story is the dialogue. The text messages coming from Sam feel extremely realistic to a real life conversation. The responses feel realistic—as if you’re actually texting a friend— without using any references that might date the game years down the line. Small touches like sending multiple texts back to back instead of long paragraphs or dragging out a word with extra letters make it convincing that you’re messaging a real person. Unfortunately, the attention to Sam’s dialogue makes the other characters’ much weaker in comparison.

The core concept of We Should Talk is the conversations people have and how they can impact everything in our lives, and the developers made this front and center in the gameplay as well. While the main gameplay mechanic focuses on choosing dialogue, the options are more robust than most dialogue branches in games. Instead of picking full sentences, the game features a dialogue wheel to let players mix and match their responses. It feels like a Rubik’s Cube at times—swapping out different sections of a sentence to set a specific tone with whoever you are talking to. 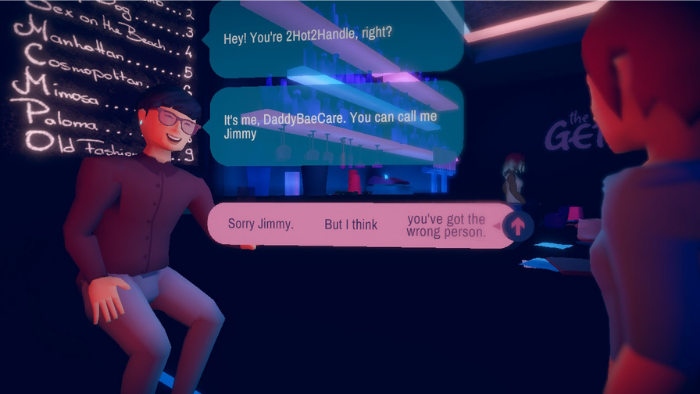 While this mechanic does provide a lot of variety in the moment, it does result in making it hard to find the right options to get different endings. The player might think they are going to get a different ending because they picked completely different responses from last time and still wind up with one of the three endings already unlocked. Additionally, the responses only change so much about the game: the player might be rude or cold to Sam during one section of the conversation. Instead of shutting down or acting angry, she’ll immediately bounce back into one of the preset benchmark conversations as if nothing happened. This makes the dialogue tedious to get through and loses some of the natural feeling the conversations managed to achieve earlier on. 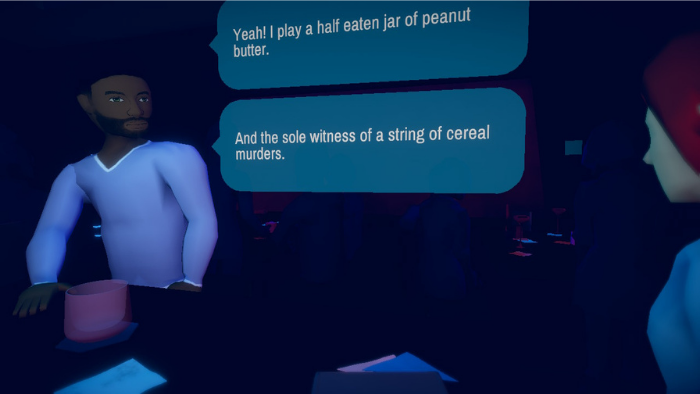 While a majority of the dialogue wheel options give you three selections for each response you give, there are a few towards the latter half of each playthrough that allow you to select from sometimes five or six options for each third of the wheel. While these seem like they are opening up the dialogue options at first, the options tend to be so similar to each other and get very similar responses from Sam. For a game that states its premise is focused on the nuances of conversations, some variety on its preset responses could have come in handy.

We Should Talk is very simple in its style. The 3D models are good, if rudimentary, and the designs do a good job getting across the personality of the characters when you’re already so limited on the time you spend with them. Because there are so few characters, the designs of the main three people players interact with are unique, particularly that of the bartender. The overall atmosphere of the bar is given a soft blue and pink neon glow, which can make players feel as if they’re really out on the town. While there are no splashy CGs to screenshot, the endings do come with a nice still-life 3D display that feels like observing a diorama—a glimpse of life beyond the one night at the bar.

One of We Should Talk’s greatest strengths is the music incorporated into the game. With no voice acting, the music helps set the tone for the game, and the selections are fantastic. Songs range from more lo-fi influenced pop songs to jams that feel as if they could have run on the radio concurrent to 2008 Ne-Yo and Chris Brown. However, there are less than a dozen songs on the soundtrack, so players doing multiple playthroughs back to back may find themself turning down the volume or tuning out the songs after circulating through them a few times.

Replayability is a must for We Should Talk as there are nine endings total accessible to players. The short play time that accompanies the game makes it easier to achieve these endings; however, it is not a guarantee you will get different endings each time you play. Since the game is so short, it isn’t hard to find yourself stumbling onto two or three of the same endings over and over again. Players might find themself frustrated after a few runs and dropping the game for some time. Although, a few days away can result in forgetting the specific combinations someone has already tried, forcing players back into the repetitive cycle of getting the same few endings. 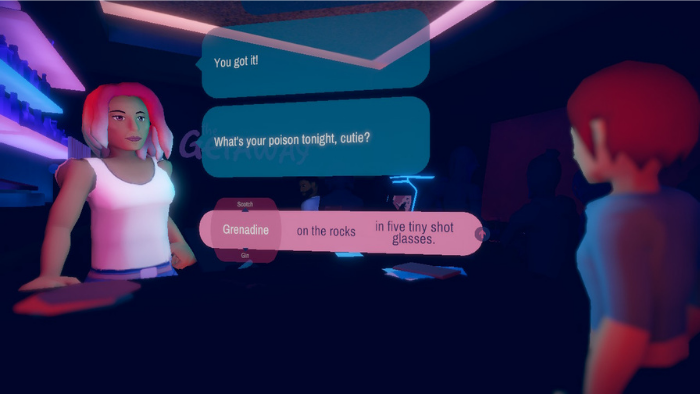 Another aspect that doesn’t help is the clunky pillars of conversation that the game clings to. No matter how different your responses are, Sam will inevitably ask you to go to the gym with her, or try to tell you about her day, even if the player responses are indifferent or outright mean. The changes between playthroughs are not as immense as one might think, meaning replays can get somewhat monotonous while trying to achieve those last few endings.

Although We Should Talk has an interesting gameplay mechanic and creates a good atmosphere, at the end of the day the need to replay multiple times to see the variety of different endings really harms the overall flow of the story. Players with a short attention span or who don’t like repetitive dialogue should steer clear of this game. At least some of the endings will require you to pick the “bad” dialogue options to see every ending in the game, so players who dislike being mean should also skip this one. However, if you have always been fascinated by the endless possibilities of conversations or the nuances of dialogue, and have hours to sit and go through endless dialogue options mixing and matching until you get the right options, this would be a great game for you.