Have you ever wondered what might happen when Kirby eats Mega Man in Super Smash Bros for 3DS and Wii U? I have, but Masahiro Sakurai isn’t telling. According to Joystick, the answers to a lot of the questions asked (including this one) during the E3 event is classified.

Here is what Sakurai told Joystick :

“As far as the physical appearance of Kirby, I think what you imagine is probably pretty close to what will actually happen.”

He then put his hands next to his head that looked like an international sign for Mega Man’s helmet, according to Joystick. Another question was asked, and it’s if Kirby would be gifted with Mega Man’s Mega Buster. Sakurai replied, “He’s got little tiny arms, so who knows.” 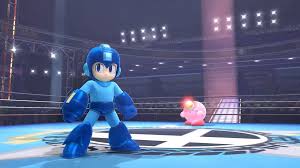 It’s been a while since I’ve played a Super Smash Bros game or Kirby. My guess on the matter (after reading what Sakurai had to say) is that Kirby might get Mega Man’s helmet after having him for lunch or dinner (you get where I’m going at). As for his attack after transformation, I have a feeling that Kirby might spit out “Mega Buster” fire instead of his arm turning into a Mega Buster itself.

This has not been confirmed, so take it with a pinch of salt.

Have a look at all of Kirby’s forms and attacks in this Super Smash Bros Brawl video below. Maybe you can come up with some ideas yourself, or see if anything that Sakurai said might be related to the next gen Super Smash Bros game :

Super Smash Bros for 3DS and Wii U will be released in 2014. I’m not sure if both versions of the game will be released on the same date (I have a feeling that they’re not going to be). We already know that cross-platform play is out, so that doesn’t look good.