Fuu-Ki is a level 28 demon with a Brute race. He can be found at a demon’s domain in ‘Ikebukuro Station – East Entrance’. The name of the demon’s domain is Bikkuri Camera and it’s not hard to find. Search for a door with a relic sign and press the “A” button next to it. Burroughs should say something about a demon’s domain. 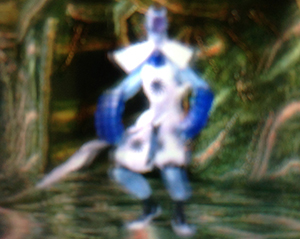 Sorry about the blurry picture. Blame my iPad’s camera. It was difficult to take a good quality photo because Fuu-Ki kept moving and there’s no pause.

What Is Fuu-Ki’s Weakness in Shin Megami Tensei IV

Fuu-Ki isn’t that difficult to take down. Keep hitting him with attacks that he is weak against (any electric element attack will do the trick) and he will eventually fall. You may be required to summon a replacement demon because he hits hard when it’s his turn.

What relic do you obtain after defeating Fuu-Ki?

After defeating Fuu-Ki, you get the Small Fridge relic. This relic can be delivered to complete one of the relic recovery quests – the ‘Relic Recovery: Small Fridge’ quest.